Future of voting rights up in the air: In Plain English

June is traditionally a busy month at the Supreme Court, with the nine Justices issuing a flurry of opinions before they head out of town for the summer.  (Yes, it’s nice work if you can get it.)  And as a general rule, June is often when we see decisions in some of the Court’s highest-profile cases – remember the media frenzy last June when the Court finally announced its ruling in the challenge to the Affordable Care Act, also known as “Obamacare”?  This year is no exception:  on Monday, a sharply divided Court upheld a Maryland law that allows police to take DNA samples from people who are arrested for “serious” crimes, and Court watchers are still waiting on cases involving same-sex marriage and affirmative action.  But civil rights groups are also watching another case closely:  Shelby County v. Holder, in which the nine Justices hold the future of the Voting Rights Act in their hands. 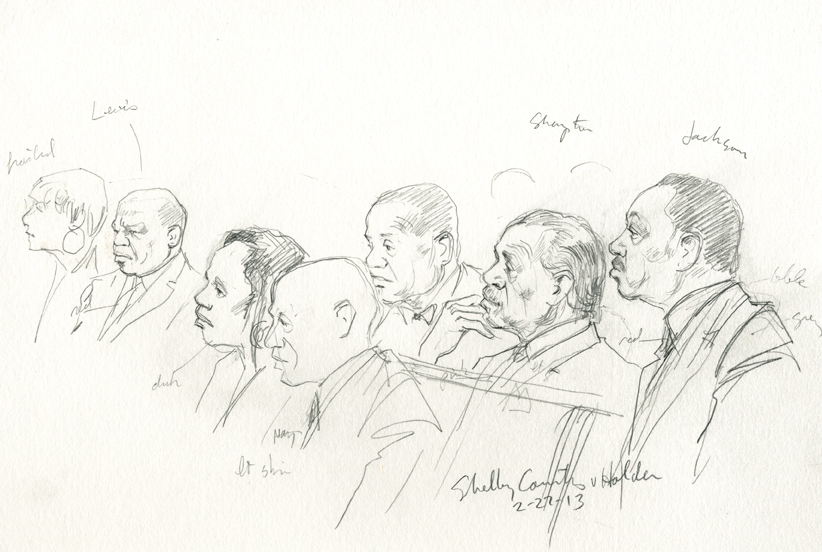 Notables of the civil rights movement seated in the Supreme Court to hear challenge to Section V of the Voting Rights Act including John Lewis, Al Sharpton and Jesse Jackson. (Art Lien)

To understand the current challenge to the Voting Rights Act, we need to go all the way back to 1965, when Congress first passed the law.  With discrimination against African-American voters widespread, especially in the South, Congress outlawed both blatant efforts to discriminate and other tactics, like literacy tests, that had been used to try to keep African Americans from voting.  Even with those bans in place, though, Congress was still worried that state and local governments might come up with new ways to get around the law.  So in Section 5 of the Act, it also required jurisdictions with a history of voting problems to get federal approval before changing their voting laws or procedures – a process known as “preclearance.”

Section 5 was originally supposed to last for five years, but Congress has extended it several times – most recently in 2006, for another twenty-five years.  Meanwhile, many states and local governments have come to resent the time and cost associated with the preclearance process, not to mention what they regard as the indignity of having to get permission from Washington even for something as simple as changing the location of a polling place.

Four years ago, the Court heard a challenge to the law’s constitutionality by a small Texas utility district, and Court watchers believed then that Section 5’s days might be numbered.  Although several of the Court’s conservative Justices seemed ready to strike down the law, in the end the Court declined to do so.  Instead, it told the utility district that it could go back to the lower court and ask for a ruling that it no longer had to follow the preclearance rules.    But the Court also made clear that it was frustrated with the status quo and wanted Congress to fix what it saw as the law’s shortcomings:  even if the law has helped to combat voting discrimination, it suggested, the fact that states and local governments have discriminated in the past shouldn’t mean that they have to comply with the preclearance rules forever.

In the four years since that decision, Congress has not made any changes to the Voting Rights Act.  Now another challenge – from Shelby County in Alabama – is back at the Court, and this time there may not be an easy way out.  At the oral argument in late February, it was clear that the Court’s four more liberal Justices were solidly behind the law.  But the Court’s four more conservative Justices seemed to be just as solidly opposed to it:  Chief Justice John Roberts and Justice Samuel Alito, for example, both were troubled by the fact that some of the states which are required to get preclearance now have better voting records than states that do not need preclearance.  And Justice Antonin Scalia seemed to argue that the Court needed to step in and overturn the law because members of Congress were too afraid of the stigma that might result from voting against the Voting Rights Act, whether it is needed or not.

We often think of Justice Anthony Kennedy as the swing vote on the Court, and that might eventually wind up being the case here.  But nothing that he said at the oral argument gave supporters of the Voting Rights Act much hope that he would vote to uphold the law in its current form.   And Court watchers are now predicting that Chief Justice John Roberts will be the author of the Court’s opinion in the case, which can only make the law’s supporters more nervous.  Will the Chief Justice surprise us all by pulling a “health care” here too?   We could know as soon as Monday at 10 a.m.

Disclosure:  Goldstein & Russell, P.C., in which I am a partner, is among the counsel to Representative F. James Sensenbrenner et al., who filed an amicus brief in support of the respondent in this case.  However, I was not involved in the case or the brief at all.