By the numbers: Gearing up for OT2011

This is the first post in a series analyzing statistical trends at the Supreme Court. For a more complete look at the statistics we collect on the Court, you can find all of our up-to-date charts and graphs here.

The Supreme Court has now granted just over half the cases that it is likely to hear during October Term 2011, so it seems like as good a time as any to begin breaking down the cases that have been accepted for review. The Court has granted 49 total petitions, but one was dismissed under Rule 46 soon after it was granted, so we will use 48 as the total.

The Court’s workload: With 48 cases on the docket for OT2011, the Court is in good shape moving into the fall. During the Roberts Court, the Court has typically had between 45-55 cases on the docket following the Long Conference, and the current pace should allow it to grant cases at its own pace through January to fill the Term. The Court remains on pace after granting only seven cases at the Long Conference because it granted an unusually high number of cases at the final June conference – 13. 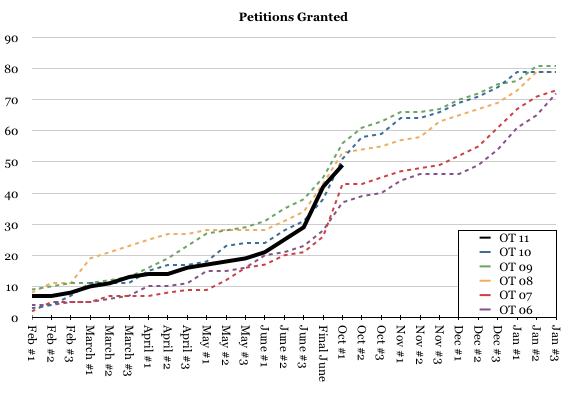 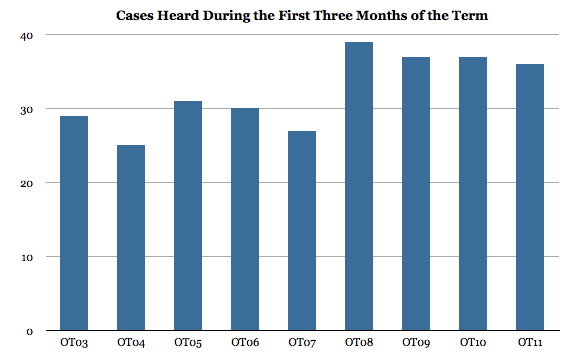 Make-up of the docket. The Court has docketed a surprisingly high number of habeas cases for oral argument during OT11. While the Court typically hears around 8-12 habeas cases each year (10-12% of all cases), this year it has already granted 10 habeas petitions (16% of all cases). If that pace continues as the Court grants a full slate of 80 cases, it will have granted 17 total habeas petitions during the present Term.

Circuit scorecard. The U.S. Court of Appeals for the Ninth Circuit almost always supplies a plurality of the Court’s docket, but this year the rate of Ninth Circuit cases at the Supreme Court has increased dramatically. During the Roberts Court, the percentage of cases originating in the Ninth Circuit has ranged from 14% during OT07 to 32% during the last Term. However, for OT11, the same court has provided a staggering 42% of the current docket (20 out of 48 cases). Even if the Court were to ignore petitions from the Ninth Circuit for the rest of the OT11 Term – a statistical improbability – cases from that court would still comprise 25% of the total docket if the Court decided around 80 total cases. 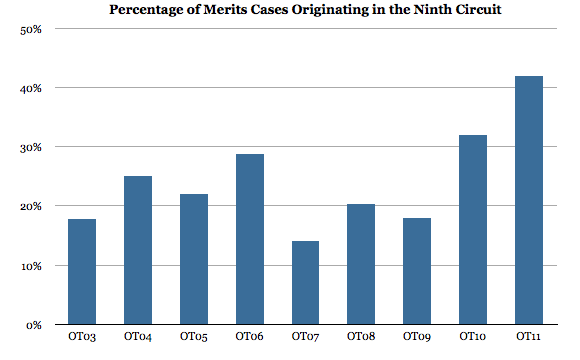 Recusals. There is not much to report in the way of recusals. Justices have recused from OT11 cases at a pace consistent with recent practice – Justice Kagan in two cases (Golan v. Holder and FAA v. Cooper) and the Chief Justice and Justice Sotomayor in one each (Credit Suisse v. Simmonds and FCC v. Fox, respectively).

What to expect moving forward. In many years, the Court will release 1-2 summary reversals during the first month of the Term, but signed opinions are typically not released until the end of the November sitting or the beginning of the December sitting. Based on recent practice, we can expect 1-3 merits opinions to be released before the new year.