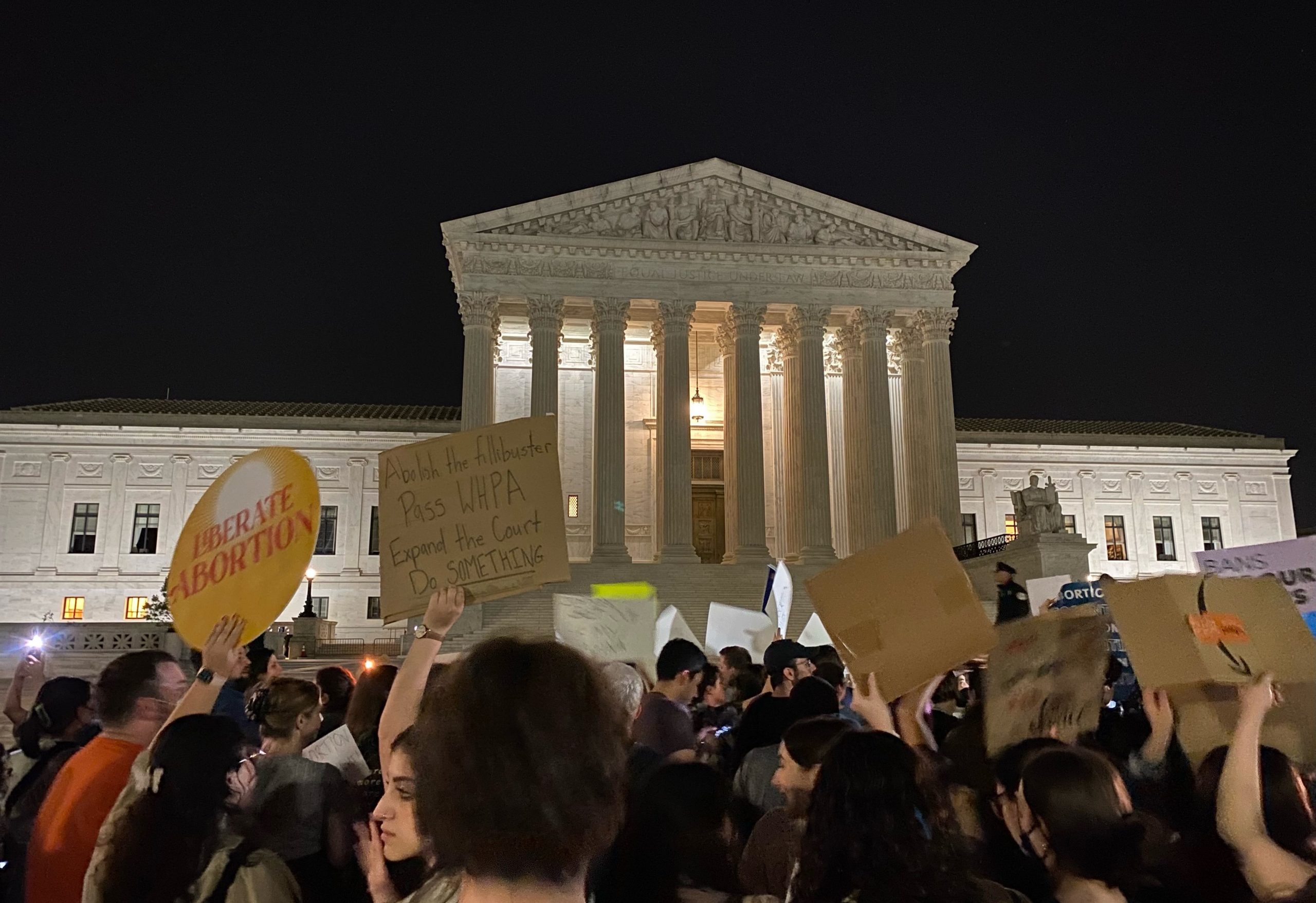 Supporters of abortion rights protest in front of the Supreme Court on May 2, 2022, hours after Politico published a draft of the Dobbs decision. (Katie Barlow)
Share

The Supreme Court has not been able to determine who leaked a draft of Justice Samuel Alito’s opinion in Dobbs v. Jackson Women’s Health Organization, the court said on Thursday.

The unprecedented leak last May revealed that the court was privately poised to overturn the court’s landmark decisions establishing a constitutional right to an abortion. The court indicated on Thursday that investigators would continue to review some additional evidence, but the court’s two-page statement left open the possibility that the source of the leak may never be found.

The court’s statement denounced the leak as “a grave assault on the judicial process.” And a report by Gail Curley, the court official tasked with investigating the leak, suggested that the court’s document-handling policies should be beefed up to prevent future leaks. “If a Court employee disclosed the draft opinion,” Curley wrote, “that person brazenly violated a system that was built fundamentally on trust with limited safeguards to regulate and constrain access to very sensitive information.”

The court’s statement came eight-and-a-half months after Politico published Alito’s draft opinion on May 2, 2022. One day later, the Supreme Court confirmed that the leaked opinion was authentic, and Chief Justice John Roberts disclosed that he had directed Curley, who is the court’s marshal, to launch an investigation into the source of the leak.

The leaked opinion sparked protests from abortion-rights supporters and caused the court to take extra security precautions. Police officers erected fencing and metal barricades to keep protesters off the court’s plaza, while Attorney General Merrick Garland directed federal law-enforcement officials to provide security around the clock at the homes of all justices.

In early June, a California man was arrested near the home of Justice Brett Kavanaugh and charged with attempted murder of a Supreme Court justice. He told police he was upset by the leaked opinion.

The court released its decision in Dobbs on June 24. By a vote of 5-4, in an opinion that closely resembled the draft published by Politico, the court officially overturned Roe v. Wade and Planned Parenthood v. Casey. Justices Clarence Thomas, Neil Gorsuch, and Amy Coney Barrett, along with Kavanaugh, joined the Alito opinion.

In the months since Roberts announced the investigation into the leak, the court did not provide any additional information about the status of the investigation. In remarks last year at a judicial conference, Gorsuch revealed that Roberts had appointed an internal committee to investigate the leak, and he expressed hope that the justices would receive the committee’s report “soon.”

Thursday’s statement revealed that Curley and her team interviewed “almost 100 employees” – 82 of whom had access to the draft opinion. Despite those efforts, the “team to date has been unable to identify a person responsible by a preponderance of the evidence,” the court said. The investigators will continue to follow up on a few outstanding leads, the statement added.

The court also revealed that it consulted with Michael Chertoff, a former judge who served as the head of the Department of Homeland Security during the George W. Bush administration. Chertoff, the court said, was unable to identify anything that Curley and her team should have done as part of their investigation.

A 20-page report from Curley accompanied the court’s statement. Although investigators were unable to determine how the draft was provided to Politico, Curley wrote, they ruled out as “unlikely” the possibility that someone from outside the court had hacked into the court’s computer systems. And, Curley acknowledged, the COVID-19 pandemic “and resulting expansion of the ability to work from home, as well as gaps in the Court’s security policies, created an environment where it was too easy to remove sensitive information from the building and the Court’s IT networks, increasing the risk of both deliberate and accidental disclosures of Court-sensitive information.”

Curley’s report made a series of recommendations to improve confidentiality of documents at the court. She urged the justices to restrict access to sensitive documents and limit the number of hard copies in circulation. She also suggested that the court adopt a “universal policy” on “the mechanics of handling and safeguarding draft opinions and Court-sensitive documents” and put a system in place to track the printing and copying of such documents.

Curley reported that her investigation “focused on Court personnel – temporary (law clerks) and permanent employees – who had or may have had access to the draft opinion.” Curley did not indicate whether the report’s references to “employees” and “personnel” included the justices themselves.

In December, The New York Times reported on allegations of a 2014 breach of confidentiality at the court. Rob Schenck, who once played a leading role in the anti-abortion movement, said he learned the outcome of the court’s decision in Burwell v. Hobby Lobby, involving religious rights and birth control for employees, several weeks before it was released. Schenck said that major donors to his non-profit relayed the news to him after dining with Alito and his wife. Alito denied Schenck’s allegations.