In challenge to Indian Child Welfare Act, court will weigh the rights of states and the role of race 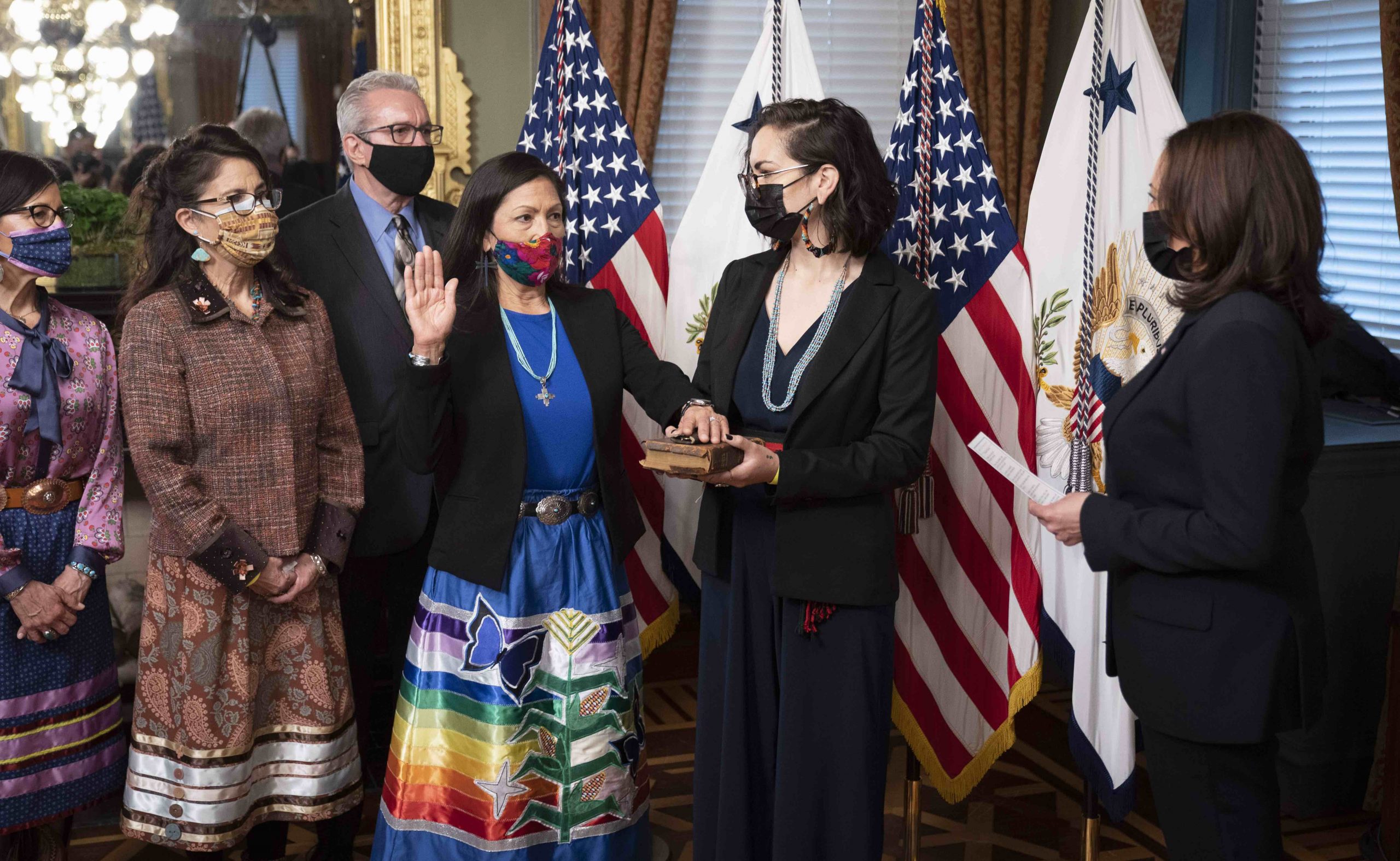 Interior Secretary Deb Haaland, the first Native American cabinet secretary and the named defendant in a challenge to the Indian Child Welfare Act, is sworn in by Vice President Kamala Harris on March 18, 2021. (White House photo by Lawrence Jackson)
Share

Native American tribes call the law “one of the most important pieces of federal Indian legislation ever enacted,” and they warn that a ruling in favor of the challengers “would work profound harm on Indian children and Tribes.” But Texas, one of the challengers, argues that ICWA “has not achieved its stated ends of improving stability and security among Indian tribes,” so that Native American children covered by ICWA “remain at a greater risk for abuse and neglect than other children.”

The dispute before the Supreme Court on Wednesday – Haaland v. Brackeen and three consolidated cases – was filed in federal court in Texas by Texas and seven individuals: three couples who are not Native American who had tried to foster or adopt children with Native American ancestry, as well as the biological mother of a Native American child whom one of the couples, Chad and Jennifer Brackeen, eventually adopted. Four tribes later joined the case to defend the law. The federal district court ruled for the plaintiffs, holding that ICWA is unconstitutional, but a three-judge panel of the U.S. Court of Appeals for the 5th Circuit reversed. A ruling by the full 5th Circuit that partly affirmed and partly reversed the panel’s decision prompted four different petitions for Supreme Court review, from the Biden administration, Texas, the individual challengers, and the tribes. The justices agreed in February to take up the case.

There are four main issues at the heart of the dispute. The first is whether ICWA goes beyond the powers that the Constitution gives to Congress in Article I, which authorizes Congress to “regulate Commerce” “with the Indian Tribes.” The challengers contend that states, rather than Congress, have long had the power to regulate adoption and child-custody proceedings. Nothing in Article I authorizes Congress to interfere with those proceedings, they say. And although Congress purportedly relied on its powers to regulate commerce with the tribes, they stress, “children and the families seeking to give them homes are not articles or instrumentalities of commerce.”

The second issue in the case is whether ICWA violates the Constitution’s guarantee of equal protection, which generally bars the government from discriminating based on race, gender, or ethnicity. The Biden administration and the tribes contend that the distinctions that ICWA draws are purely political – that is, based on membership in a tribe or a close connection to a tribe. As a result, they note, they are subject to a less stringent constitutional test, which requires only a rational relationship between the law and Congress’s duty to Native Americans. That relationship is clearly present, they continue, because ICWA creates a scheme that seeks “to prevent the unwarranted separation of Indian children from their families and communities.”

Texas and the individual plaintiffs insist that ICWA draws distinctions, for both Native American children and would-be adoptive parents, based on race, rather than politics, as evidenced by the fact that ICWA “applies even when a child is not a member of an Indian tribe and does not live on a reservation.” Indeed, they argue, “[t]he entire purpose of the statute” is “to treat Indian children, parents, and potential adoptive families differently from non-Indians in order to shore up tribes’ numbers.” Classifications based on race, they add, are subject to the most stringent constitutional test, known as strict scrutiny – a standard that ICWA cannot pass.

The third issue in the case involves allegations that ICWA violates the 10th Amendment’s “anticommandeering doctrine,” which bars the federal government from requiring states and state officials to adopt or enforce federal law. The challengers emphasize that Congress could not directly require state legislatures to adopt federal preferences for placements, and it should not be able to do so indirectly by enacting ICWA and then requiring state courts to implement it.

Texas also challenges a provision of ICWA that allows tribes to adopt, for use in state courts, their own order of preferences for the placement of Native American children belonging to a particular tribe. That provision, Texas contends, unconstitutionally delegates legislative power to the tribes and “allows the tribes … to determine with whom state courts should attempt to place Indian children and under what circumstances.”

The Biden administration and the tribes reject any effort to characterize the provision as unconstitutionally delegating power. Instead, they counter, the provision “prospectively incorporates Tribes’ own preferences into federal law.”