Court to hear battle over animal welfare, the dormant commerce clause — and the price of bacon 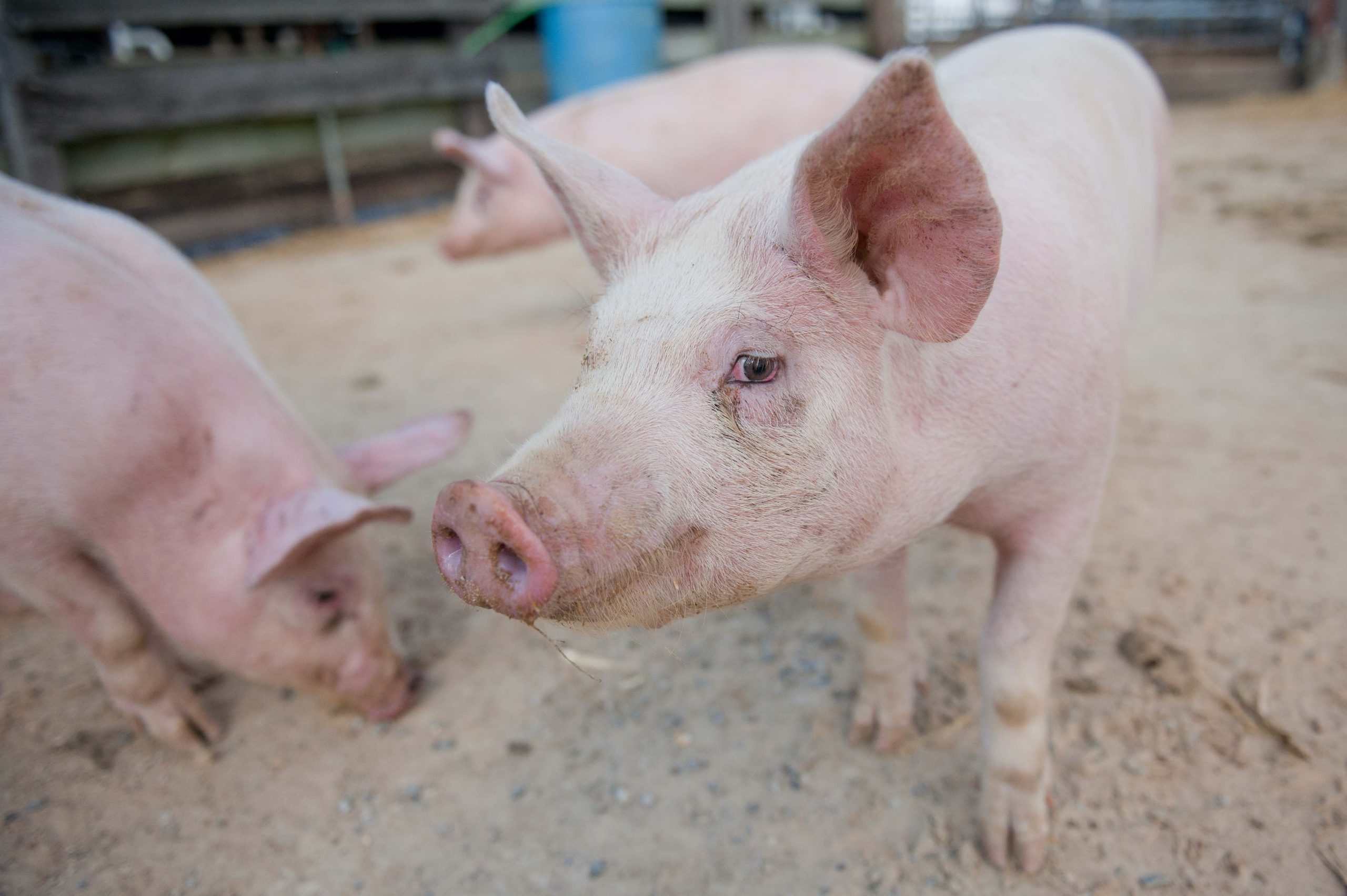 California wants to ensure that pork products sold in the state come from humanely raised pigs, but the pork industry argues that the state law is unconstitutional. (Robert Crow via Shutterstock)
Share

In 2018, California voters approved Proposition 12, a ballot initiative that its supporters describe as the country’s strongest law to protect farm animals. On Tuesday, the Supreme Court will hear oral argument in a challenge to the constitutionality of the law. The challengers, two groups that represent farmers and pork producers, contend that the law “will transform the pork industry nationwide,” while California and its supporters insist that the impact will be more limited. And both sides of the dispute contend that a ruling for the other side will have legal implications far beyond animal welfare.

Proposition 12 bars the sale in California of uncooked pork products when the seller knows or should know that the meat came from the offspring of a sow – a breeding pig – that was confined “in a cruel manner.” Among other things, this means that breeding pigs must have at least 24 square feet of living space, which is roughly the size of two bath towels and 10 square feet more than the “gestation crates” used by the vast majority of commercial operations. Violators face fines and the possibility of a 180-day prison sentence for each sale of pork in California that does not meet the state’s standards.

The National Pork Producers Council and the American Farm Bureau Federation went to federal court in California in December 2019 to challenge the law. They argued that Proposition 12 violates what is known as the “dormant commerce clause” – the theory that, even if the Constitution does not explicitly say anything about state law, the Constitution’s grant of power over interstate commerce to Congress also means that states cannot pass laws that discriminate against interstate commerce.

A federal district court rejected the challengers’ argument, and the U.S. Court of Appeals for the 9th Circuit upheld the lower court’s decision. The challengers then came to the Supreme Court, which in March of this year agreed to weigh in.

The challengers argue that Proposition 12 violates the dormant commerce clause because, as a practical matter, it will not only regulate the pork industry outside of California, but in fact virtually all of its impact will fall outside of California. California, the challengers note, has only one-tenth of 1% of the country’s breeding pigs, so virtually all of the pork consumed in California originates outside the state. Moreover, the challengers add, because one pig can be processed into several different cuts, and there is no way to know where a particular cut of meat will eventually be sold, all pork producers will effectively be required to comply with Proposition 12.

With pork producers all over the country subject to Proposition 12 as a practical matter, the challengers continue, the effects of the law on the way in which breeding pigs are housed all over the country, as well as the pork industry more broadly, will be sweeping. It will raise prices on all pork sales, they tell the justices, put smaller pig-breeding farms out of business and compel farmers to “adopt practices that they believe are harmful to their sows and employees.” And in doing so, the challengers write, the law “inescapably projects California’s policy choices into every other State” – even when other states, like Ohio, specifically allow pork formers “to do what Proposition 12 forbids.”

California and the Humane Society of the United States, which joined the case to defend Proposition 12, push back against the challengers’ suggestion that the law violates the dormant commerce clause. The Supreme Court, they stress, has long explained that the primary purpose of the dormant commerce clause is to guard against protectionism and discrimination – neither of which, they note, was the impetus behind Proposition 12. Instead, they write, Proposition 12 applies to all sales of uncooked pork products, regardless of where they came from.

The challengers’ real argument, the state and the Humane Society continue, is that Proposition 12 “is unconstitutional because of the practical effects it might have on the production costs and commercial choices of out-of-state pork producers.” But that argument, they say, “seeks a vast and unwarranted expansion of the holdings of this Court’s cases.” In any event, they continue, those effects are relatively limited: Pork producers have to comply with Proposition 12 for pork that they want to sell in California, but “they are free to produce as many other pork products as they want, and to sell them to markets outside of California.”

The Humane Society also responds to the challengers’ contention that allowing Proposition 12 to stand will foist California’s choices on other stands. The challengers’ interpretation, the group suggests, “prevents California from deciding what appears on California grocery shelves. Instead, the preferences of Iowa or other pork-producing States would project into California to control what Californians eat.”

Supporters of California and the Humane Society echo their assertion that a ruling for the challengers could have far-reaching effects. Brian Frazelle of the Constitutional Accountability Center, which filed a brief on behalf of constitutional law professors, said that the challengers are seeking a “dramatic expansion” of the law that would call many other kinds of laws into question. And a group of 14 states and the District of Columbia, led by Illinois, told the justices that would “greatly constrain” the power of states to “enact even-handed, nondiscriminatory regulations of activities within their respective jurisdictions.”

But a brief filed by the National Association of Manufacturers warned that allowing the lower court’s decision to remain in place would open a Pandora’s box to all kinds of regulations of the food supply. “If California can enact laws controlling the production of out-of-state pork,” the group wrote, “Texas can dictate how California grows avocadoes and tomatoes.” A brief filed by the Retail Litigation Center cautioned that the 9th Circuit’s decision could affect the supply chain for other retail goods and restaurants more broadly.

The numerous “friend of the court” briefs filed in the case also quarrel over the facts and assumptions underlying the dispute. One brief filed by a group of agricultural and resource economics professors suggests that the economic impact of Proposition 12 will not be as significant as the challengers predict. Under Proposition 12, they say, consumers in California will pay more for uncooked pork products, but it will have relatively little effect on other pork consumers in the U.S. The producers for whom it makes economic sense to comply with Proposition 12 will do so, the professors reason, while those who “choose not to supply the California market will suffer at most only marginal economic harm.”

Another brief, filed by a veterinarian, seeks to refute the challengers’ contention that the structure of the pork industry, with the possibility that different cuts from the same pig will go to different parts of the country, makes it impossible for producers to know whether their products will eventually be sold in California. The pork industry has developed “highly sophisticated” methods to trace and segregate pork products, Dr. Leon Barringer writes. Indeed, Barringer notes, the use of these methods allows “pork producers to make marketing claims like ‘antibiotic-free’ and ‘source-verified’ on their pork products.”

Two other briefs filed by veterinarians spar over what benefits Proposition 12 may provide to animals. In a brief supporting the challengers, the American Association of Swine Veterinarians cites “a well-established body of scientific literature” demonstrating that the use of both individual stalls and group pens “can be important in managing a healthy herd. Categorically banning one of them, as Proposition 12 does,” the group concludes, “will likely harm rather than improve animal well-being.”

But a brief by nearly 400 animal welfare scientists and vets counters that the AASV brief “relies heavily on studies published by the National Pork Board and funded by the pork industry, which focus on … economic benefits to pork producers – rather than on animal welfare.” The AASV’s analysis, the briefs says, “disregards peer-reviewed research” and “ignores the harms that gestation crates inflict on pigs.”