Jackson, as circuit justice for 1st Circuit, will review emergency appeals from most of New England

The Supreme Court court on Wednesday released a new list of circuit assignments to reflect Justice Ketanji Brown Jackson’s arrival at the court in late June. Jackson is the circuit justice for the 1st Circuit, which covers Maine, Massachusetts, New Hampshire, Rhode Island, and Puerto Rico. The other justices’ circuit assignments remain the same as they were before Jackson joined the court. 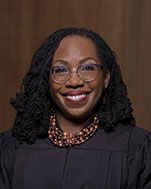 A circuit justice is primarily responsible for emergency requests (for example, an application to block an execution or to allow it to go forward) from the geographic area covered by his or her circuit, as well as more mundane matters, such as requests to extend filing deadlines. However, justices can and often do refer significant emergency requests to the full court – a role that has taken on increased importance in recent years with the sharp uptick in activity on the court’s “shadow docket.” A map of geographical regions covered by each circuit is available here.