A VIEW FROM THE SOUTH LAWN

“We’ve made it. All of us”: Jackson is honored at White House ceremony 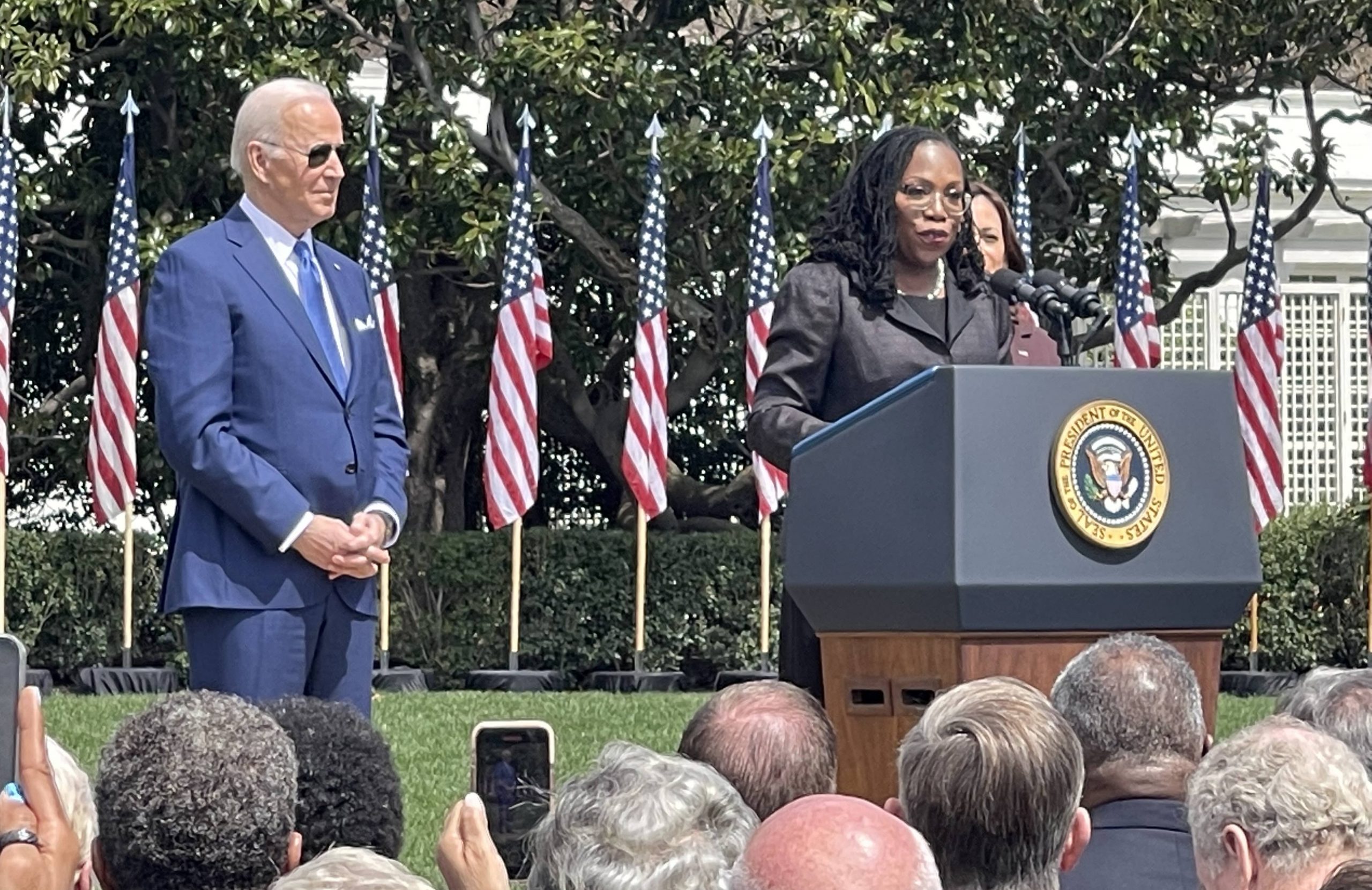 Judge Ketanji Brown Jackson speaks at a White House ceremony on Friday to celebrate her confirmation to the Supreme Court. (Mark Walsh)
Share

One day after the Senate confirmed her nomination to the Supreme Court, Judge Ketanji Brown Jackson delivered a powerful message of gratitude and acknowledgement extending generations during an event on the White House South Lawn on Friday.

“It has taken 232 years and 115 prior appointments for a Black woman to be selected to serve on the Supreme Court of the United States,” Jackson said before President Joe Biden, Vice President Kamala Harris, Cabinet members, lawmakers, civil rights advocates, her family, and others. “But we’ve made it. We’ve made it. All of us.”

Her use of the plural “we” sparked an extra burst of applause from a crowd that included such African American women as Secretary of Housing and Urban Development Marcia Fudge; Reps. Sheila Jackson Lee, D-Texas, and Frederica Wilson, D-Fla.; Linda Thomas-Greenfield, the U.S. ambassador to the United Nations; and Kristen Clarke, the assistant U.S. attorney general for civil rights.

Also present were Secretary of Defense Lloyd Austin, Secretary of Education Miguel Cardona, Senate Majority Leader Chuck Schumer, D-N.Y., and Sen. Dick Durbin, D-Ill., the chairman of the Senate Judiciary Committee. There were eight other senators and about 20 other House members.

Doug Jones, the former senator from Alabama who guided Jackson’s nomination through the Senate and whom Jackson called an “absolute godsend,” frequently removed his Biden-style aviator glasses to snap pictures with his phone.

The crowd was festive on a mostly sunny, 60-degree day after three days of rain in the nation’s capital. Before the ceremony began, there was some speculation about just what was going to take place, and a few attendees could be heard asking who would administer the oath to Jackson.

But there would be no oath on Friday. That will come later, as Justice Stephen Breyer has said he will retire when the court begins its summer recess in late June or early July.

Supreme Court justices were invited to Friday’s event, but none showed up. It seems likely that, without the cloak of being an official swearing-in ceremony, the event had too much of a political cast for the court’s tastes.

The entire court has sometimes appeared at the White House for the swearing-in of a new colleague. The justices, for instance, attended oath-taking ceremonies when Neil Gorsuch and Brett Kavanaugh were appointed. But Kavanaugh’s 2018 ceremony was marked by some sharp political barbs from President Donald Trump.

When Amy Coney Barrett was confirmed in 2020, a number of factors gave most of the justices some cover in skipping a South Lawn ceremony. The event was just days before the presidential election, COVID-19 was a major concern, and it was being held at night just hours after the Senate had confirmed Barrett. Still, Justice Clarence Thomas participated by administering one of Barrett’s two required oaths.

In any event, Jackson is now in the unusual position of being what some have dubbed a “justice in waiting.” Marcia Coyle wrote in February in The National Law Journal that no new justice has taken the oaths of office before the member of the court being replaced has left service. But a few have been sworn in the same day as the outgoing justice retired, including Breyer on Aug. 3, 1994 (replacing Harry Blackmun), and Justice Samuel Alito on Jan. 31, 2006 (replacing Sandra Day O’Connor, who had extended her service beyond her initial retirement target after Chief Justice William Rehnquist’s death created another vacancy.)

When Jackson arrived with the president and vice president, it was Harris who took the lead.

The president risked spoiling a bit of the positive vibe permeating the event by referencing “the verbal abuse” he said Jackson faced from Republicans on the Senate Judiciary Committee.

“The anger, the constant interruptions, the most vile, baseless assertions and accusations. In the face of it all, Judge Jackson showed the incredible character and integrity she possesses. Poise. Poise and composure. Patience and restraint. And yes, perseverance, and even joy,” Biden said.

“Our children are telling me that they see now more than ever that here in America anything is possible,” Jackson said. “They also tell me that I am a role model, which I take both as an opportunity and as a huge responsibility.”

“I am feeling up to the task, primarily because I know that I am not alone,” she added. “I am standing on the shoulders of my own role models, generations of Americans who never had anything close to this kind of opportunity, but who got up every day and went to work believing in the promise of America. Showing others through their determination and, yes, their perseverance, that good, good things can be done in this great country.”

She quoted the late poet Maya Angelou: “I do so now while ‘bringing the gifts my ancestors gave. I am the dream and the hope of the slave.’”