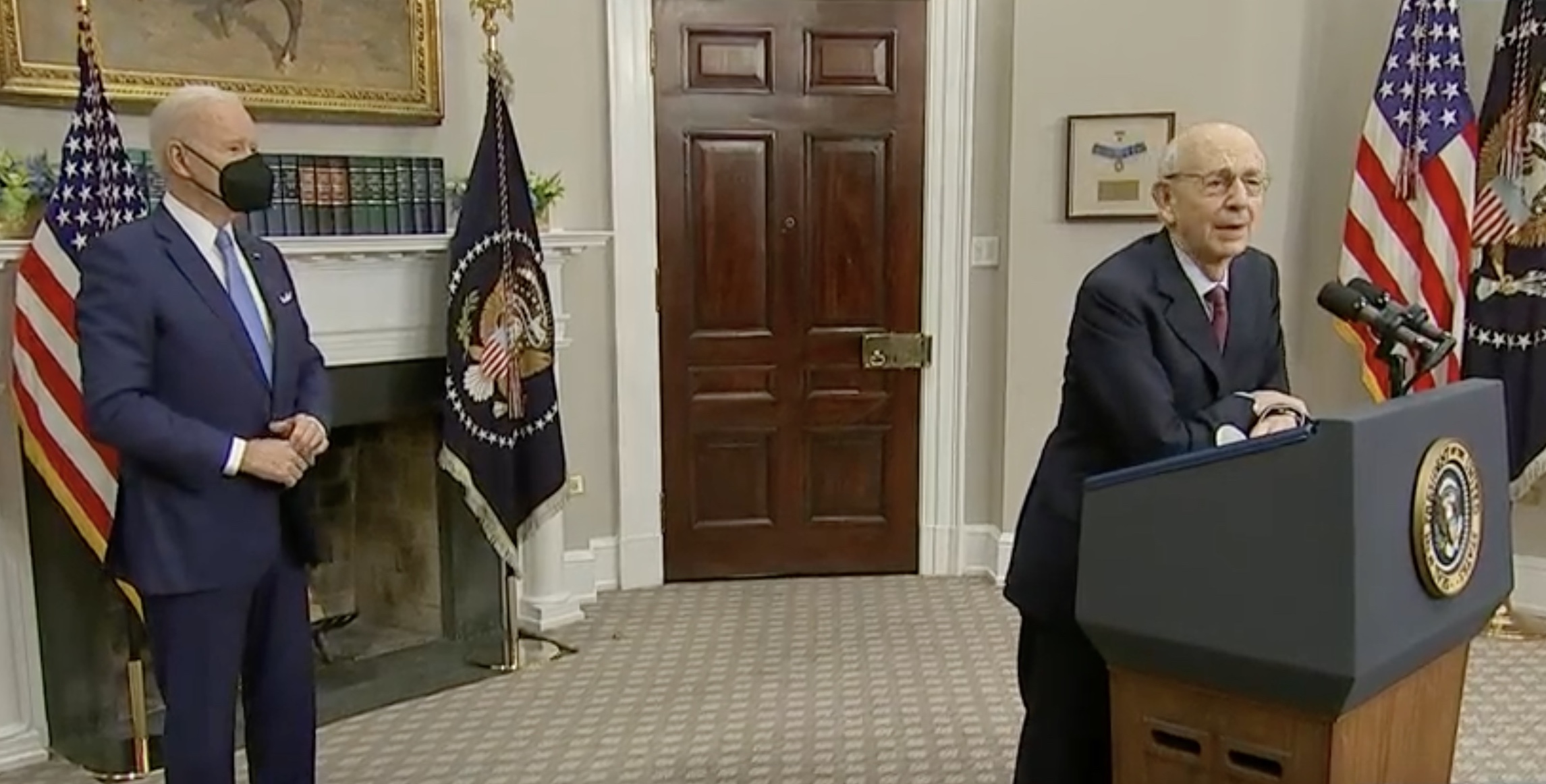 Justice Breyer speaks at a ceremony with President Joe Biden in the Roosevelt Room at the White House. (C-SPAN)
Share

Justice Stephen Breyer on Thursday confirmed news reports indicating that he intends to retire from the Supreme Court. In a brief letter to President Joe Biden, the 83-year-old Breyer wrote that he plans to step down from the court at the end of the current term, assuming that a successor has been confirmed by that time. And in a joint appearance with Breyer that followed the release of his letter, Biden reiterated his pledge to nominate a Black woman to fill the vacancy created by Breyer’s retirement. Biden said he has not yet chosen a nominee but plans to do so by the end of February.

In his letter, Breyer told Biden that he planned to retire from the court but would continue to serve as a judge on the courts of appeals – following in the footsteps of retired Justice David Souter, who regularly sits on panels of the U.S. Court of Appeals for the 1st Circuit. Breyer wrote that he had found his work on the court “challenging and meaningful,” and – one week after other justices issued rare public statements to push back against press reports of tension at the court – stressed that his relationship with each of his colleagues has been “warm and friendly.” Throughout his nearly three decades on the court, Breyer concluded, “I have been aware of the great honor of participating as a judge in the effort to maintain our Constitution and the rule of law.”

Biden and Breyer entered the room for their joint appearance at the White House wearing masks, but each man removed his mask when it was time for him to speak. Biden went first, describing the day as a “bittersweet” one for him. He explained that his relationship with Breyer dated back to the mid-1970s, when Breyer worked for the Senate Judiciary Committee while Biden was a young senator from Delaware. Biden expressed gratitude for Breyer’s public service, noting that Breyer “worked tirelessly to give faith to the notion that the law exists to help the people.” Describing Breyer’s opinions as “practical, sensible and nuanced,” Biden praised the justice as a “model public servant in a time of great division in this country.”

Biden then turned briefly to the question of choosing a nominee – which, he said, is one of a president’s most serious responsibilities. He promised that the selection process would be “rigorous” and would identify a nominee “worthy of Justice Breyer’s legacy of excellence and decency.”

“While I’ve been studying candidates’ backgrounds and writings,” Biden said, “I’ve made no decision except one: The person I will nominate will be someone with extraordinary qualifications, character, experience, and integrity. And that person will be the first Black woman ever nominated to the United States Supreme Court. It’s long overdue, in my opinion.”

Biden indicated that he would consult with senators from both parties before choosing his nominee. Senate Democrats, who hold a slim majority in the chamber, have indicated that they plan to move quickly to consider the nominee as soon as she is announced.

Breyer’s remarks were, for anyone who follows the court regularly, vintage Breyer. He was unable to resist the temptation to interject even while the president was speaking. When Biden noted that Breyer had served in all three branches of government before the age of 40, Breyer piped up, “They were the good old days, weren’t they?”

Later, after Breyer took the lectern, he spoke about how he enjoys talking with students about U.S. history and the role that the rule of law has played and continues to play in it. “This is a complicated country,” Breyer said, with people from many different backgrounds and “every point of view possible.” “It’s a kind of miracle,” he observed, to see so many different people who have decided to solve “their major differences under law.” Breyer then quoted from President Abraham Lincoln’s Gettysburg Address (and disclosed that his wife, Joanna Breyer, had paid their grandchildren to memorize it). The United States, he emphasized, is “an experiment that’s still going on” and young people “will determine whether the experiment still works.” But, he concluded, he is an “optimist” who believes that it will.

Biden ended the appearance by inviting the Breyers to stay in the White House’s Lincoln Bedroom, which boasts a handwritten copy of the Gettysburg Address. He told reporters that he would not take any questions, but that did not stop them from shouting questions as Breyer and Biden left the room.