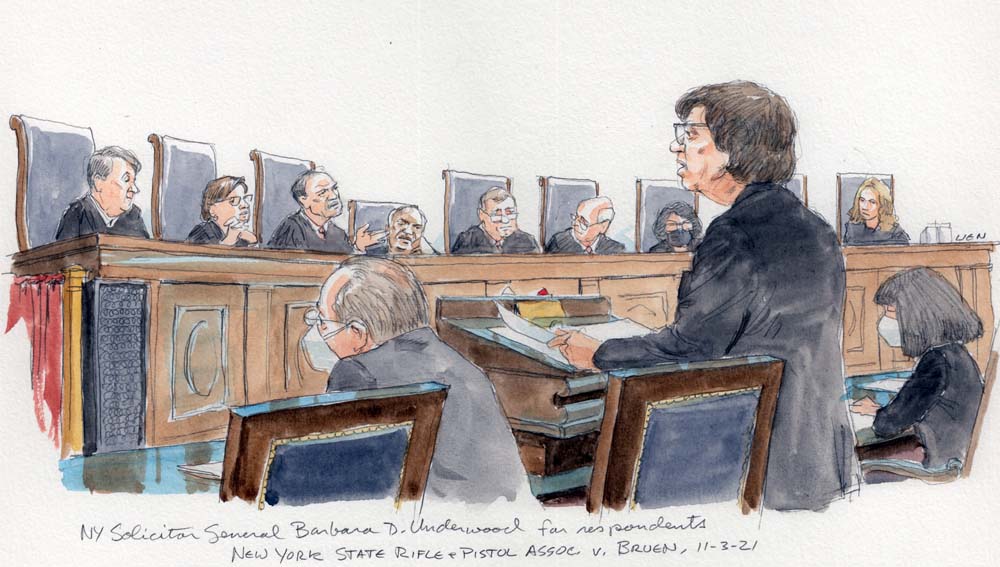 When Wednesday’s oral argument in New York State Rifle & Pistol Association v. Bruen drew to a close after roughly two hours of debate, it seemed likely that New York’s 108-year-old handgun-licensing law is in jeopardy. But the justices’ eventual ruling might be a narrow one focused on the New York law (and others like it), saving broader questions on the right to carry a gun outside the home for later.

The law requires anyone who wants a license to carry a concealed handgun to show “proper cause” for the license. Courts in New York have defined “proper cause” to require applicants to show a special need to defend themselves, rather than simply wanting to protect themselves or their property.

Representing the challengers in the case, a gun-rights advocacy group and two men whose applications for unrestricted concealed-carry licenses were denied, lawyer Paul Clement told the justices that the text of the Second Amendment enshrines a right to bear arms, and the history and tradition of the United States confirm that the text protects an individual right to carry a gun for self-defense. Carrying a gun outside the home is a fundamental right that people in 43 other states enjoy, Clement observed. And the point of a constitutional right, he stressed, is that you don’t have to satisfy a government official that you have a good reason to exercise it. 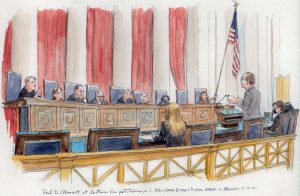 The court’s liberal justices pushed back on both Clement’s assertion that the history of gun laws and gun rights supported his interpretation and the methodology that he proposed they use. Clement, for instance, argued that the justices shouldn’t look at “history for the sake of studying history,” but instead at the history that is relevant to determine what the drafters of the Constitution intended the Second Amendment to mean — and that the inquiry should stop in the 19th century. Justice Elena Kagan resisted. In District of Columbia v. Heller, she countered, the court “basically put the stamp of approval” on a variety of gun-control measures, such as laws restricting gun possession by people who have been convicted of felonies or who suffer from mental illness. “And those laws really came about,” she queried, “in the 1920s, didn’t they?”

Justice Sonia Sotomayor cited “the plethora of regimes” that legislatures have chosen with regard to the carrying of weapons, from “English law through the colonies … to even now.” Sotomayor’s conclusion, she told Clement, was that until recently “there were so many different regulations.” “I don’t know,” she said, “how I get past all that history.”

The liberal justices also questioned whether New York’s permitting regime is actually as stringent as Clement suggested. Kagan noted that Clement’s brief portrayed the New York scheme as one that denies most people the ability to carry a gun for self-defense. But, she posited, if statistics showed that the state actually grants many of the applications, the court might view the case differently. And at more than one point in the argument, the liberal justices advocated for additional proceedings in the lower court to develop more facts on how many permit applications the state has granted – a move that would, at least for now, stave off a ruling on the merits of the challengers’ claim.

To the extent that the conservative majority pressed Clement, it was largely on the limits of the relief that he was seeking, and in particular what a ruling in his clients’ favor might mean for “sensitive places” like courthouses, schools, and airports. Chief Justice John Roberts asked Clement whether restrictions could be placed on the concealed carry of handguns on university campuses, at football stadiums, or at places where alcohol is served.

Clement responded that a determination would have to be made on a case-by-case basis, considering factors such as whether a particular place is open to the public. That led to one of the lighter moments of the argument, when Kagan followed up with a question about the prospect of restrictions on concealed carry at New York University, telling Clement that “anyone can walk around a campus.”

“NYU,” Clement countered, “doesn’t have much of a campus.”

Justice Brett Kavanaugh stressed that the question before the court is limited to the constitutionality of the New York permitting regime. He asked Clement whether his clients would object to the “shall issue” regimes used in other states, under which authorities are required to issue a carry permit as long as an applicant satisfies basic requirements such as a background check and firearms training. Clement acknowledged that, as a general matter, they would not object. “We’d like what they’re having,” he said.

And if the only question before the court was the constitutionality of the permitting regime, Kavanaugh continued, the court would not need to address “all of the ‘sensitive places’ questions.”

Clement agreed, noting that although New York has restrictions on “sensitive places,” his clients had not challenged them.

And Kavanaugh seemed to suggest that the constitutionality of the permitting regime could be largely resolved based on the text of the Second Amendment – the right to “bear arms” — without needing to delve too deeply into the historical practice. “We don’t start the analysis in a vacuum,” he emphasized to Clement, “but we start it with the text, which you say grants a right to carry, and then historical practice can justify certain kinds of regulations, but the baseline is always the right established in the text.”

Barbara Underwood, the solicitor general of New York, told the justices that for centuries, English and American laws have imposed limits on the carrying of guns in public for the protection of public safety. New York’s law fits well within that tradition of regulating public carry, she argued. Brian Fletcher, the principal deputy solicitor general of the United States, argued in support of New York on behalf of the Biden administration, and he similarly emphasized the history of gun regulations. Fletcher listed various 19th-century state laws that he characterized as analogous to the New York law. 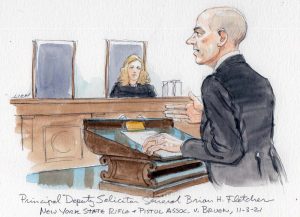 Several of the court’s conservative justices took issue with the state’s rationale for granting unrestricted licenses to carry handguns more often in less densely populated areas, on the ground that disputes are less likely to break out. Roberts was dubious, and he peppered Underwood with questions. The court’s ruling in District of Columbia v. Heller, he pointed out, relied on the right to self-defense. Wouldn’t, he asked, someone have a greater need for self-defense in a higher-density area?

When Underwood responded that New York wanted to protect the right to self-defense but also protect public safety, Roberts pushed back again. He said he can understand a regulation prohibiting guns in a football stadium, but the right to protect oneself would be greater in a high-crime area. “How many muggings take place in the forest?” Roberts asked.

Justice Clarence Thomas questioned where New York draws the line between higher- and lower-density areas. “How rural,” he asked, “does the area have to be before your restrictions shouldn’t apply?” When Underwood responded that there isn’t a cutoff, but that unrestricted licenses are “much more readily available” in less densely populated areas, Thomas retorted that one of the challengers, Robert Nash, “lives in quite a low-density area.”

Justice Samuel Alito probed New York’s requirement that an applicant for an unrestricted concealed-carry license show a “non-speculative,” as Underwood put it, need to defend himself. Alito described workers in Manhattan – nurses, dishwashers, orderlies, doormen – who don’t have criminal records, but do have to take public transportation and then walk to their homes late at night “through a high-crime area.” Even if there have been a lot of muggings in their neighborhoods, Alito said, they would not be able to get a concealed-carry license under the current regime. How, he asked, “is that consistent with the core right to self-defense, which is protected by the Second Amendment?”

Kavanaugh followed up with a similar question. “Why,” he asked Underwood, “isn’t it good enough to say I live in a violent area and I want to be able to defend myself?”

Underwood’s response – that an applicant’s claims “are examined by a licensing officer,” who can presumably consider an applicant’s entire situation – prompted Kavanaugh to voice another concern. If the official who determines whether to issue the license has discretion in making that decision, Kavanaugh suggested, “that seems inconsistent with an objective constitutional right.”

Roberts made a related point in his questioning of Fletcher. He told Fletcher that, with other constitutional rights, the Constitution “gives you that right, and if someone’s going to take it away from you, they have to justify it.” Why, Roberts asked, should citizens need to prove that they are entitled to – or have a special need to – exercise their constitutional right to carry guns outside the home for self-defense?

Fletcher stood firm, telling Roberts that such an argument “assumes the conclusion.” The very question in the case, he said, is whether the Second Amendment guarantees the right to carry a handgun for self-defense without a demonstrated need to do so.

But Roberts was still skeptical. No matter what the right is, he responded, “it would be surprising to have it depend upon a permit system. You can say that the right is limited in a particular way, just as First Amendment right are limited, but the idea that you need a license to exercise the right, I think, is unusual in the context of the Bill of Rights.”