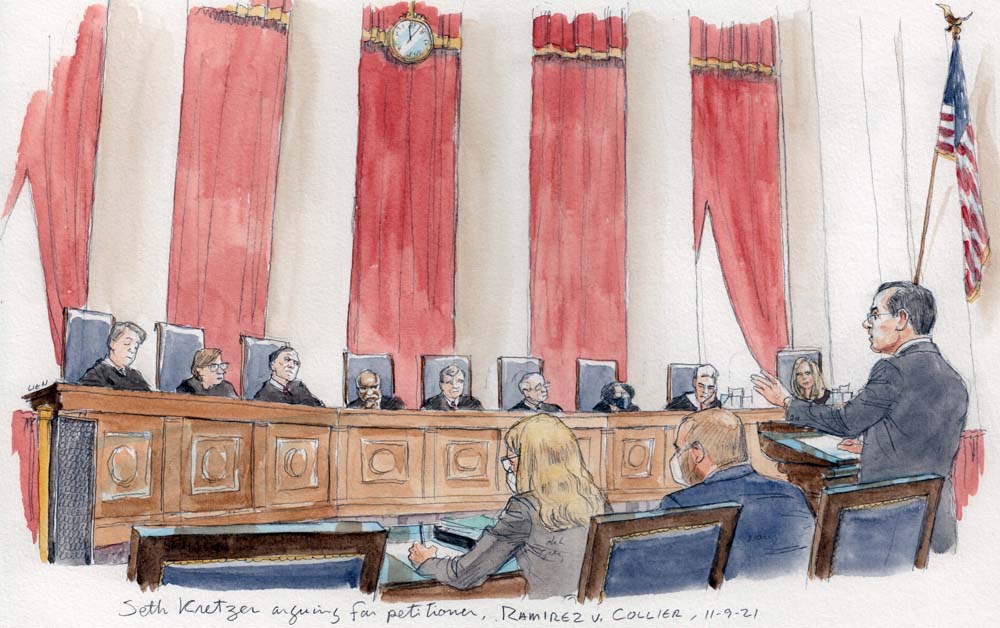 The Supreme Court on Tuesday appeared divided over a Texas inmate’s plea to have his pastor touch him and pray out loud while he is being executed. The justices have wrestled with the question of spiritual advisers at executions for two and a half years, but Tuesday’s oral argument in Ramirez v. Collier was the first time that they heard argument on the right of inmates to receive religious comfort and guidance in their final moments. The justices weighed the inmates’ religious rights against the state’s concerns about security and its desire to have the execution proceed smoothly, as well as their own worries about the prospect of endless last-minute litigation by inmates facing execution.

Arguing on behalf of inmate John Ramirez, lawyer Seth Kretzer told the justices that, before changing its policy in 2019, Texas had carried out hundreds of executions in which spiritual advisers were allowed to touch the condemned inmate and pray out loud.

Chief Justice John Roberts pressed Kretzer on the limits of his rule. Is it enough, Roberts asked, that Ramirez’ pastor, Dana Moore, touch him anywhere on his body, or does he have to touch him somewhere specific? When Kretzer responded that anywhere on the inmate’s body would be fine, Roberts inquired whether his answer would be different if an inmate’s religion required the spiritual adviser to touch the inmate on the forehead, for example, or the heart? Kretzer indicated that it would be a closer case, but that both of those body parts were still not located near the place where an IV would be inserted.

Justice Brett Kavanaugh suggested that any form of touching could pose a problem because the lethal injection process is delicate and complex. Kavanaugh pushed back against Kretzer’s contention that Texas had repeatedly carried out executions with spiritual advisers touching inmates, telling him that such examples “don’t move me at all” because those chaplains had been state employees. Kavanaugh was more worried, he said, about “someone from the outside,” like Moore, “coming in.” Kavanaugh returned over and over again to the idea that the state was trying to reduce the risk of having something go wrong in the execution. Allowing a spiritual adviser to touch the inmate during the execution, Kavanaugh contended, will increase that risk.

Kavanaugh voiced a related concern when Kretzer told Roberts that courts should analyze a state’s failure to provide the religious accommodations that an inmate requests on a case-by-case basis. A ruling in favor of Ramirez, Kavanaugh complained, would mean that similar claims would be “a heavy part of our docket for years to come.”

Justice Samuel Alito echoed Kavanaugh’s alarm at the prospect of “an unending stream of” litigation, coming to the Supreme Court at the last minute to delay executions.

Justice Clarence Thomas suggested that Ramirez might have been “gaming the system” because he had “changed his request a number of times.” If that is the case, Thomas asked Kretzer, how should courts determine whether his religious beliefs are sincere?

Kretzer pushed back against the premise of Thomas’ question, telling the justices that Ramirez has “always asked as quickly as possible” for relief and that his religious beliefs are both sincere and “consistently stated.”

Justice Amy Coney Barrett, who in February 2021 provided a key vote to block the execution of an Alabama inmate who wanted to have his spiritual adviser in the execution chamber with him, was more sympathetic to Ramirez. Responding to Kavanaugh’s characterization of the state’s interest in barring touch and prayer by spiritual advisers as one that reduces the risk of something going wrong, she pushed Kretzer to disagree – and in so doing, appeared to signal her own disagreement. The real compelling interest, she suggested, is prison security or “carrying out the execution in a humane and safe way.” 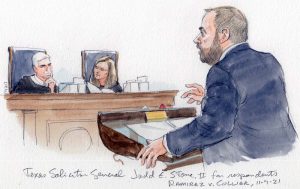 Unlike Kavanaugh, Justices Stephen Breyer and Elena Kagan appeared to be persuaded by Kretzer’s argument that Texas had allowed spiritual advisers in prior executions to touch the inmate and audibly pray. “In how many of those” executions, Breyer asked Texas Solicitor General Judd Stone, did the audible prayers and physical touch lead to “the execution going astray?”

Stone responded that there had not been any problems, but he – like Kavanaugh – stressed that the chaplains in those executions had been state employees. That prompted Kagan to ask whether Stone was aware of any executions elsewhere that had been disrupted by an outside spiritual adviser.

Stone again responded that there had not been any problems, but he added that “this is very new in the handful of jurisdictions that allow it.” Moreover, he emphasized, although the risk of disruption is “very low,” there is a “catastrophic potential” for damage if it does occur.

Deputy Solicitor General Eric Feigin argued on behalf of the federal government. He told the justices that Texas can “substantially” limit touch and audible prayer “in the highly choreographed and sensitive execution procedure,” but it cannot ban those things outright without specific and individualized reasons for doing so. In particular, he noted, during a recent spate of 13 federal executions, spiritual advisers were present in the execution chamber and praying out loud in 11; the spiritual adviser was touching the condemned inmate in just one execution, and only before the drugs were administered. Texas, Feigin suggested, has a “strong argument” that the spiritual adviser should not be permitted to touch the inmate once the medical team starts to administer the drugs, while Ramirez has an equally strong argument that the spiritual adviser should be able to pray out loud before the drugs are administered. 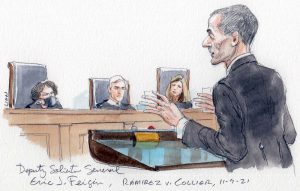 Kavanaugh later asked Stone whether Texas might be amenable to a solution along the lines of what Feigin had outlined: “There can be audible prayer before the drugs are administered. No touching.”

Stone demurred, explaining that (as Feigin noted) the federal execution chamber is significantly larger than the Texas chamber – which, Stone said, can “functionally” hold only three people. Texas, Stone continued, “is obligated … to take these prison requests one at a time.” Stone conceded that “Texas would have to have an awfully good reason to refuse” some requests, such as a request for a short blessing, after which the pastor leaves the chamber. But in this case, he stressed, Ramirez wants Moore in the chamber the whole time, touching him and praying over him.

When the justices put Ramirez’ execution on hold in September and agreed to fast-track his case, there were no public dissents. But in the Alabama case in February, four justices – Breyer, Kagan, Barrett, and Justice Sonia Sotomayor – signed an opinion concurring in that decision, while three others – Roberts, Thomas and Kavanaugh – indicated that they would have allowed the execution to go forward. Two other justices, Alito and Justice Neil Gorsuch, did not publicly indicate how they would have voted, but at least one of them must have voted with the three liberal justices and Barrett to prevent the execution from going forward. Alito’s questions on Tuesday strongly suggested that he is likely to side with Texas, which would leave Gorsuch as the key vote in the case. Gorsuch did not tip his hand on Tuesday, remaining silent throughout the argument.