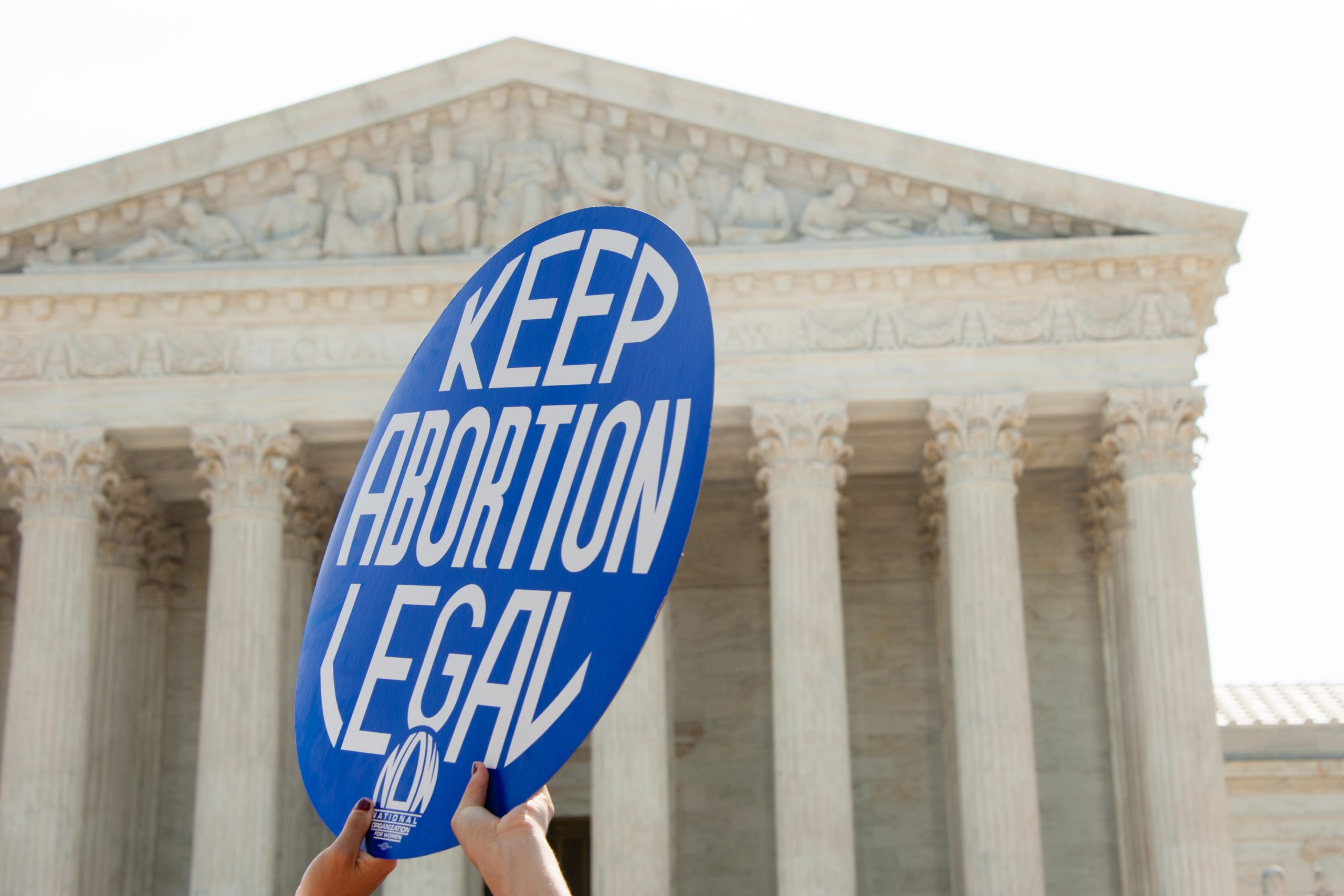 A pro-choice activist holds a sign in front of the Supreme Court in 2016. (Rena Schild via Shutterstock)
Share

A Texas law that bans abortions anytime a fetal heartbeat is detected will “immediately and catastrophically reduce abortion access in Texas” if it is allowed to take effect on Wednesday, a group of abortion providers told the Supreme Court on Monday. They asked the justices to intervene on an emergency basis and block the enforcement of the law while a challenge to its constitutionality is litigated in the lower courts.

The plea comes just over a month before the start of the Supreme Court’s new term, in which the justices are slated to review Mississippi’s 15-week abortion ban in a case that challenges the court’s landmark decisions in Roe v. Wade and Planned Parenthood v. Casey. Roe and Casey held that the Constitution protects the right to have an abortion before a fetus can live outside the womb – a benchmark, known as viability, that occurs around 24 weeks of pregnancy. The Mississippi case, Dobbs v. Jackson Women’s Health Organization, had been widely regarded as the first major test for the Roberts court on abortion since the death of Justice Ruth Bader Ginsburg in September 2020, but the Texas case that rocketed to the court on Monday, known as Whole Woman’s Health v. Jackson, involves an abortion law that is even stricter than the one at issue in Dobbs and could provide a preview of where the justices stand on the issue.

Texas Gov. Greg Abbott signed the Texas law, known as S.B. 8, on May 19. The law bars doctors from performing abortions once they can detect a fetal heartbeat, including the kind of cardiac activity that occurs at roughly the sixth week of pregnancy. The law also allows private individuals to bring lawsuits against anyone who provides or “aids and abets” an abortion. Individuals who bring successful lawsuits are entitled to collect $10,000 or more from individuals who are found to have violated the law.

Abortion providers went to federal court in Texas in July to challenge the law in advance of its Sept. 1 effective date. They sued, among others, a state judge, a county court clerk, and Mark Dickson, an anti-abortion activist who the challengers believe is likely to sue abortion providers if the law goes into effect on Wednesday.

In their 37-page filing on Monday, the challengers emphasize that, if it is allowed to go into effect on Wednesday, the Texas law will prohibit “care for at least 85% of Texas abortion patients (those who are six weeks pregnant or greater)” and will likely force many abortion clinics to close. Moreover, the challengers add, the six-week mark is “a point in pregnancy at which a State may not prohibit a patient from deciding whether to end her pregnancy.” Even Texas acknowledges that pre-viability bans on abortion conflict with Supreme Court precedent, the challengers argue. What the case really boils down to, they conclude, is whether Texas can get around that unconstitutional prohibition by “outsourcing” enforcement of the six-week ban to private individuals.

The challengers further argue that the justices can block the enforcement of the law without necessarily tipping their hand on the substance of the underlying dispute. “An application for an injunction may be granted,” they write, “without serving as an expression of the Court’s views on the merits to prevent enforcement of a potentially unconstitutional statute.” Here, they note, if the court does not act, “the rights of Texas women to obtain a legal abortion” will be “in jeopardy for months or more” while the litigation winds through the courts. If the justices do not want to go that far, the challengers suggest, the court could instead lift the 5th Circuit’s order and allow the district court to go ahead and consider the pending motions to block enforcement of the law.

The abortion providers’ request goes first to Justice Samuel Alito, who handles emergency requests from Texas. Alito can act on the request on his own or, as is more common with high-profile requests, refer it to the full court.