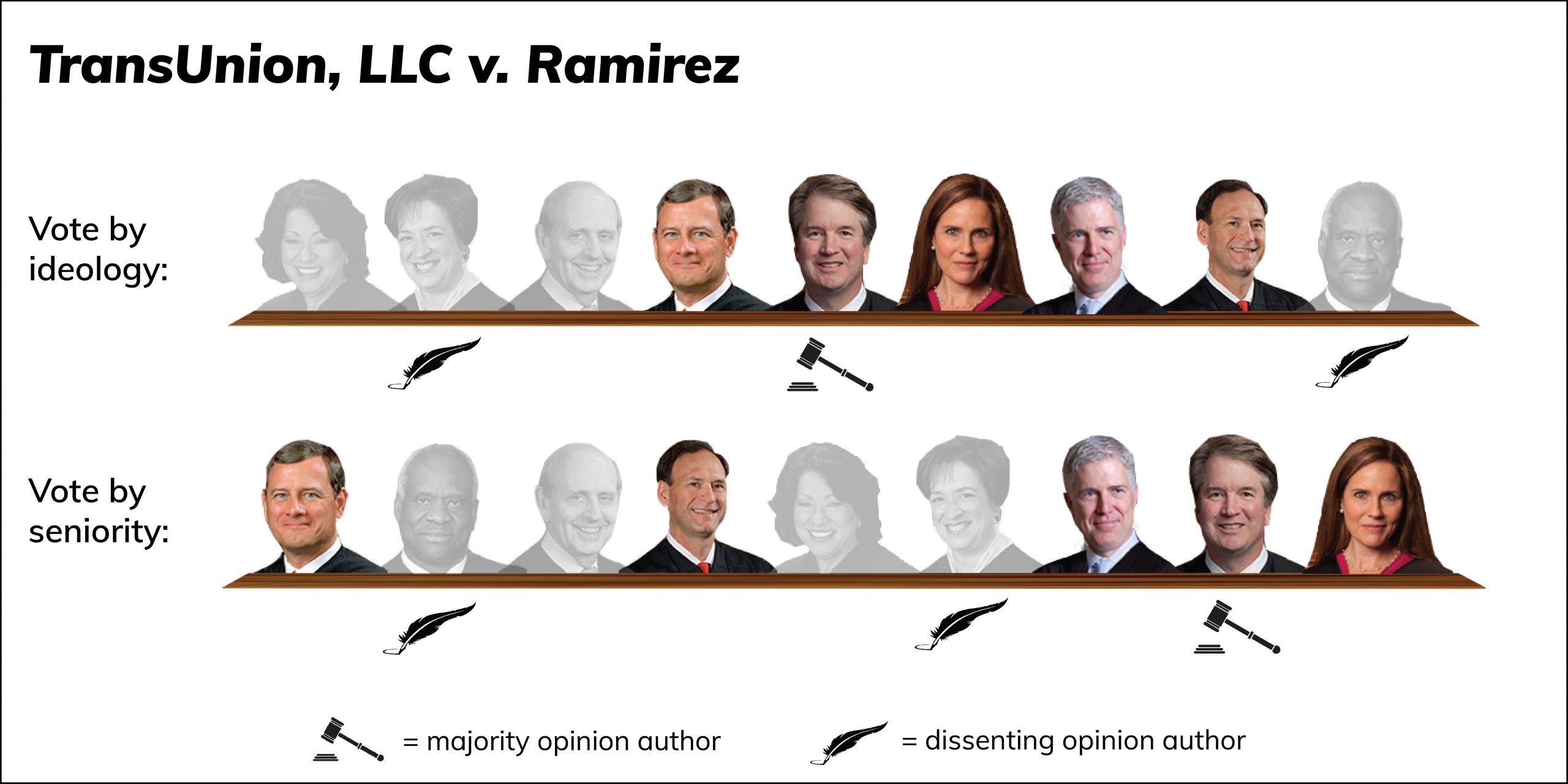 The Supreme Court on Friday substantially narrowed a class action against TransUnion, one of the nation’s three major credit-reporting companies. By a vote of 5-4, the court ruled that roughly 1,800 people whose personal information was given to someone else have a legal right to sue on their claim that TransUnion failed to follow proper procedures, but about 6,000 other people whose information was not disclosed do not. The ruling will substantially reduce a $40 million verdict against TransUnion, and it is also a victory for the business community more broadly because it likely will further limit class-action lawsuits under consumer-protection laws: The court made clear that, even when Congress has provided a cause of action in a federal law, the mere fact that the law has been violated will not, standing alone, provide a right to sue in federal court.

Friday’s ruling in TransUnion v. Ramirez came in a dispute that arose when a California man, Sergio Ramirez, attempted to buy a car. The car dealership ran a credit check, which wrongly suggested that Ramirez was on a list of suspected terrorists with whom U.S. companies are barred from doing business. When Ramirez later followed up with TransUnion, which had provided the credit report, TransUnion sent Ramirez two mailings once again indicating that his name was a “potential match” for two names on the terrorist watch list. Ramirez contended that those mailings did not comply with the Fair Credit Reporting Act.

Ramirez went to federal court, where he sued TransUnion on behalf of approximately 8,000 other consumers who had been identified as potential matches and received a similar set of mailings over a six-month period in 2011. A jury sided with the consumers and ordered TransUnion to pay more than $60 million in damages, though a federal appeals court later reduced the verdict to $40 million. TransUnion argued that the case should not have been allowed to go forward as a class action because there was no guarantee that each class member had suffered the kind of injury required by the Constitution to be able to sue, but the lower courts rejected that argument, and the Supreme Court agreed last year to take up the case.

Writing for the majority, Justice Brett Kavanaugh emphasized that the Constitution requires plaintiffs suing in federal court to have a “personal stake” in the case. To demonstrate such a stake, he explained, plaintiffs must show an injury “that the defendant caused and the court can remedy.” Such a requirement, Kavanaugh continued, guarantees that a court only deals with “a real controversy with real impact on real persons.” There are, Kavanaugh noted, different kinds of injuries that can qualify as the kind of concrete harm needed for “standing” – that is, the legal right to sue. Physical and financial injuries are the most common and obvious ones, but intangible injuries, such as an injury to a plaintiff’s reputation or the disclosure of private information, can also qualify, Kavanaugh observed.

Although Congress has sometimes passed statutes that give someone a “cause of action” when a federal law has been violated, Kavanaugh wrote, that is not enough, by itself, to give a plaintiff the right to sue in federal court. “Only those plaintiffs who have been concretely harmed by a defendant’s statutory violation may sue that private defendant over that violation in federal court,” Kavanaugh stressed. A contrary conclusion, Kavanaugh reasoned, would interfere with the Constitution’s separation of powers in two ways: It would violate the requirement that courts resolve only actual “cases” and “controversies,” and it would interfere with the executive branch’s power to decide when and how to enforce federal law.

Kavanaugh then turned to the plaintiffs’ claim in this case that, as he put it, TransUnion had not done enough to guarantee that “alerts labeling them as potential terrorists were not included in their credit files.” Assuming that the plaintiffs are correct that TransUnion had not done enough, Kavanaugh wrote, the 1,853 members of the class whose credit reports were actually sent to businesses had suffered the kind of concrete harm that would give them a right to sue. However, Kavanaugh continued, the other 6,332 class members had not suffered such a harm. TransUnion had not sent their credit information to anyone during the time period at issue in this lawsuit, and inaccurate information in the class members’ internal files is not, without more, the kind of concrete harm that will give them a right to sue.

The court concluded that none of the plaintiffs other than Ramirez had a right to sue to recover damages for two other claims, which stem from their contention that TransUnion’s mailings to them were formatted incorrectly and therefore violated federal law. None of the plaintiffs other than Ramirez, Kavanaugh emphasized, had shown that they had even opened the mailings, much less been harmed by them.

The court sent the case back to the lower court for new proceedings in light of Friday’s ruling. Among other things, Kavanaugh suggested, the lower court may consider whether it is appropriate for the case to go forward as a class action “in light of our conclusion about standing.”

Justice Clarence Thomas dissented, in an opinion joined by Justices Stephen Breyer, Sonia Sotomayor and Elena Kagan. “Despite Congress’s judgment that such misdeeds deserve redress, the majority decides that TransUnion’s actions are so insignificant that the Constitution prohibits consumers from vindicating their rights in federal court,” Thomas lamented. “The Constitution does no such thing.” Indeed, Thomas argued, courts have long held that injuries to “private rights” – such as rights granted to individuals by statutes – were enough to allow a lawsuit to go forward, and that is precisely what the class members demonstrated in this case: The federal laws at issue create duties on behalf of credit-reporting agencies to consumers, which were violated here.

Kagan wrote a separate dissent that Breyer and Sotomayor joined. She complained that the majority “transforms standing law from a doctrine of judicial modesty into a tool of judicial aggrandizement,” holding for the first time “that a specific class of plaintiffs whom Congress allowed to bring a lawsuit cannot do so under” the Constitution. Kagan noted that she disagreed with one part of Thomas’ dissent: his argument that plaintiffs should have a legal right to sue whenever there is a violation of an individual right created by Congress. The Supreme Court ruled in Spokeo v. Robins that the Constitution requires a concrete injury, Kagan stressed. But in practice, she indicated, her view “should lead to the same result as Justice Thomas’s approach in all but highly unusual cases.”