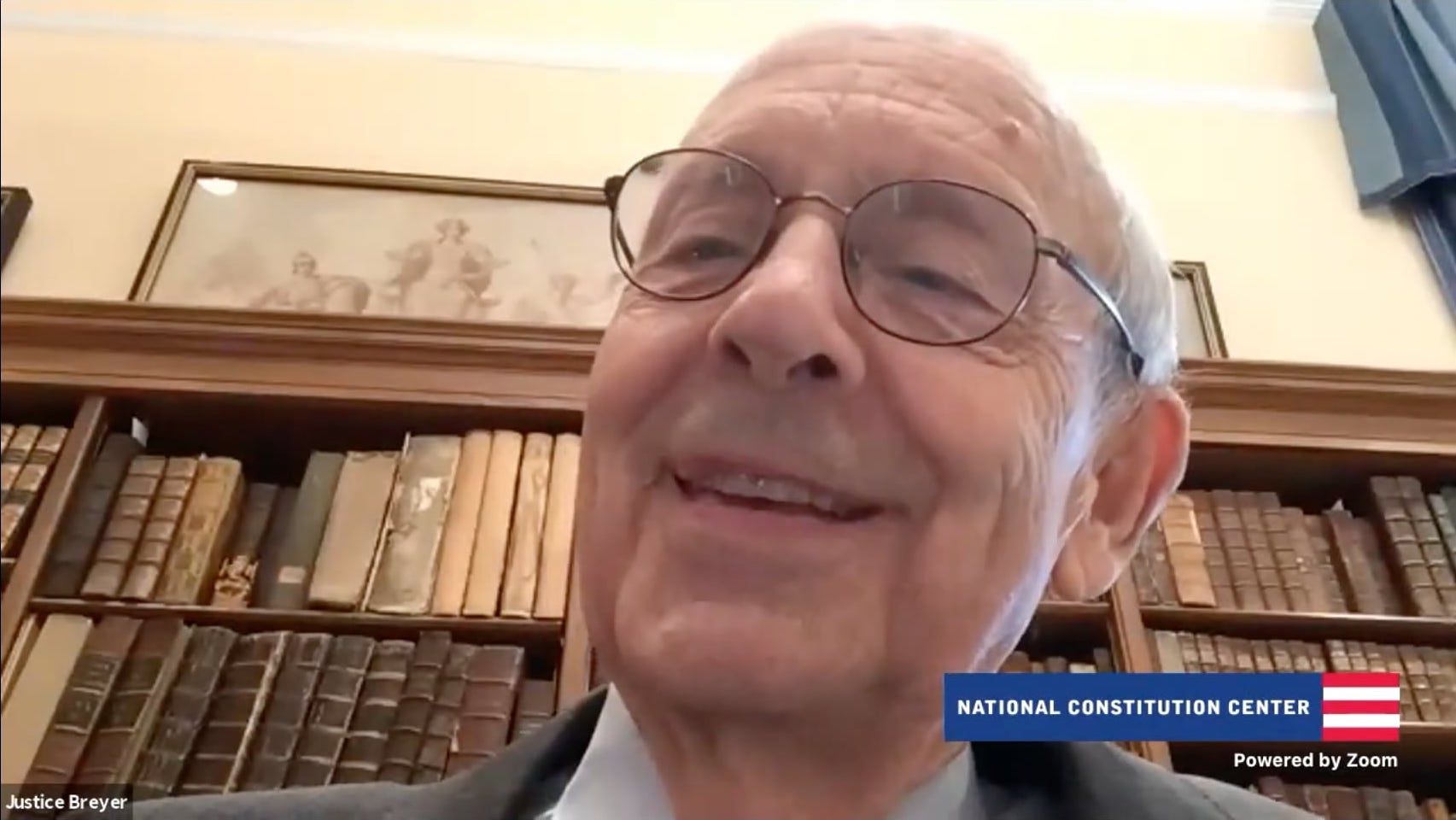 Justice Stephen Breyer speaks with students over Zoom during an event hosted by the National Constitution Center.
Share

Justice Stephen Breyer extolled the virtues of civics education and reaching out across ideological divides, arguing on Friday that when enough people want their elected officials to work together, they will do so. Breyer’s remarks, which the 82-year-old jurist made during a wide-ranging conversation with Jeffrey Rosen of the National Constitution Center, came on the same afternoon that Senate Republicans used a procedural filibuster to block legislation that would have created a bipartisan commission to investigate the Jan. 6 riot at the Capitol.

Breyer spoke via Zoom from his chambers at the Supreme Court, against a background of antique books and art borrowed from the National Gallery of Art, to a group of middle- and high-school students. Breyer told the students that they need to know how the U.S. government works “so that we can maintain it.” Breyer emphasized that this is “not the first time people have become discouraged with the democratic process,” and that the United States has experienced racism before. “Of course it’s a bad system,” Breyer acknowledged, “except for the others.” The American political system, Breyer stressed, is still an experiment. Breyer mused out loud, “Will it work?” “Your job,” he said to the students, “is to see that it does.”

Rosen pressed Breyer, saying that many people think the U.S. system is broken. What can we do, Rosen asked, to make it work? Breyer responded that he was “basically optimistic,” although he added that he didn’t know how much of that optimism is justified. The late Sen. Edward Kennedy, for whom Breyer worked early in his career, used to say that the country swings, Breyer explained, and will right itself eventually. He noted that he frequently saw Kennedy reach out to Republicans when he needed their support and talk to them. Once people start talking, Breyer suggested, they will eventually find some common ground.

With the justices slated to consider in the fall a Mississippi abortion law intended to challenge Roe v. Wade, Rosen also asked Breyer about the role of precedent. Breyer responded that the law is in part about stability, allowing people to plan their lives. “If you are changing it all the time,” Breyer observed, “people won’t know what to do.” On the other hand, Breyer contended, the more you change the law, the more people will ask courts to change it.

Breyer, the oldest justice on the court, has faced mounting pressure from some liberals to retire and allow President Joe Biden to nominate a younger successor while Democrats have narrow control of the Senate. Breyer did not discuss his future plans on Friday.

He spoke warmly of his colleagues at the court, telling his audience that “of course” you can be friends with justices who have very different approaches to the law. Although he and his colleagues don’t always agree on cases, Breyer made clear, “I’ve never heard a voice raised in anger.” The conservative Justice Clarence Thomas, Breyer emphasized, is a “very, very decent person.”

Breyer’s discussion of the late Justice Ruth Bader Ginsburg, who died in September 2020, was poignant. “I miss her,” Breyer said. And he disclosed that when talking about a case recently with one of his law clerks, he said to the clerk, “Let’s go see what Ruth thinks.”

Breyer revealed that during the pandemic he had been “driving Joanna” – his wife, a psychologist – “crazy!” He had also been “working at my word processor,” meditating (“you do feel better,” he said), “fake bike riding” on “one of those machines” – prompting several tweets about whether the justice has a Peloton – and watching reruns of the TV classic M*A*S*H.