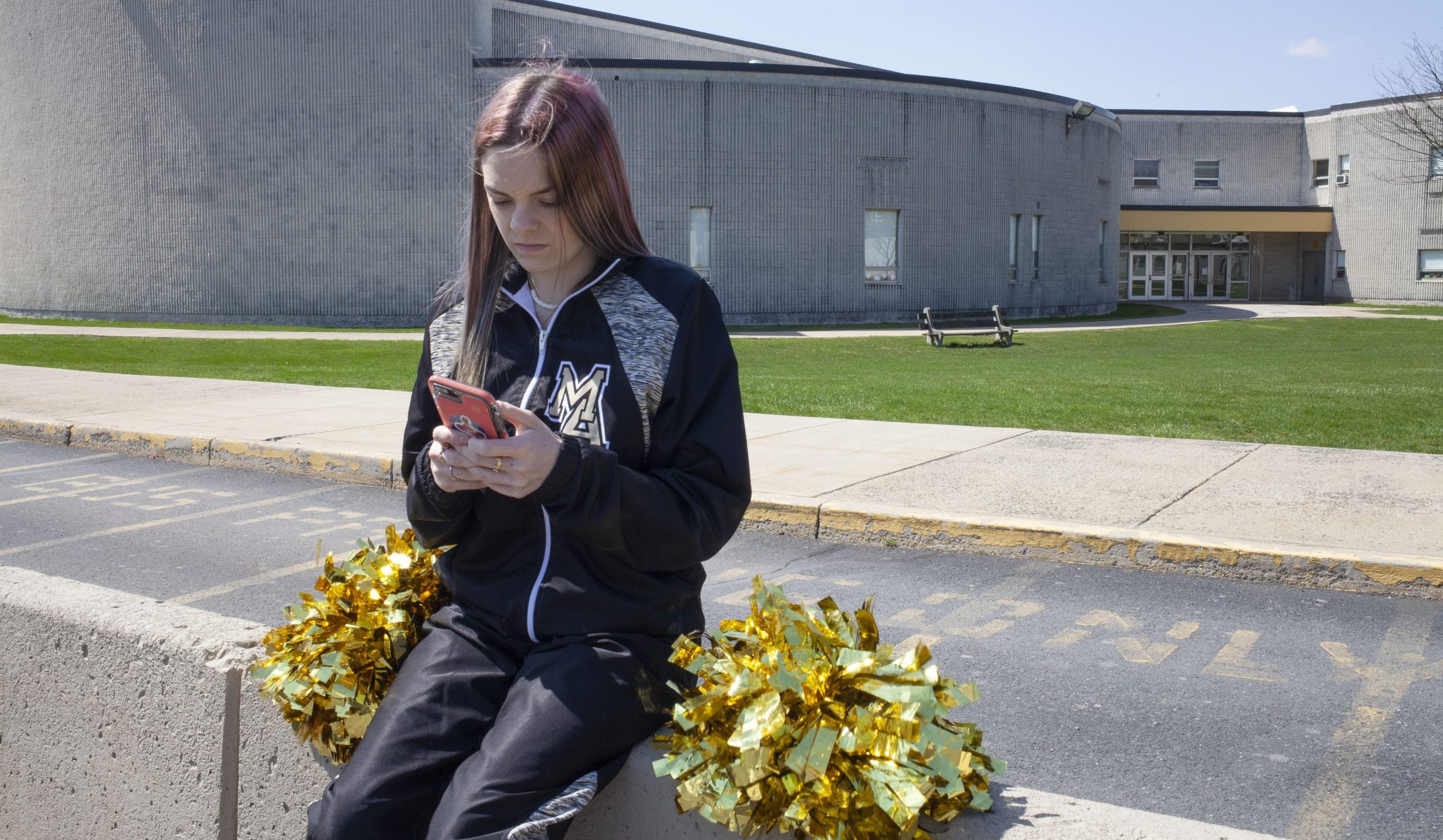 Brandi Levy, who was suspended from her cheerleading team after sending a barbed Snapchat message, poses in front of her high school. (Danna Singer/provided by the ACLU)
Share

In 1969, the Supreme Court ruled in Tinker v. Des Moines Independent Community School District that public school officials can regulate speech that would substantially disrupt the school’s work. On Wednesday, the justices will consider whether Tinker also applies to speech by students that occurs off campus. In the internet era, in which cellphones and social media are omnipresent and many schools and parents worry about cyberbullying, the court’s ruling in Mahanoy Area School District v. B.L. could become a landmark decision on student speech.

The case now before the Supreme Court began in 2017, when 14-year-old Brandi Levy didn’t make her high school’s varsity cheerleading team. On a Saturday, when she was not at school, Levy took to social media – specifically, the app Snapchat, where she posted a picture of herself and a friend with their middle fingers raised, along with the caption “Fuck school fuck softball fuck cheer fuck everything.”

Levy and her parents went to federal court in Pennsylvania, where they argued (among other things) that the suspension violated the First Amendment. A federal district court agreed, and the U.S. Court of Appeals for the 3rd Circuit upheld that decision. The court of appeals rejected the school board’s argument that Tinker applies to speech by students that occurs off campus. The school district went to the Supreme Court last summer, asking the justices to weigh in. They agreed to take up the case in January.

In its brief at the Supreme Court, the school district maintains that the internet, and social media in particular, has “blurred” any distinction between on-campus and off-campus speech. Therefore, the school district stresses, a school should be able to regulate speech that is directed at the school and disrupts the school environment, wherever it originates.

The school district adds that schools have always had and used the power to discipline speech that is disruptive to the school or harms other students, wherever the source. Indeed, laws in the District of Columbia and at least half of the states require schools to deal with disruptive harassment or bullying, even when it occurs off campus, while school districts in the remaining states have codes barring off-campus harassment and bullying. Moreover, the school district observes, federal laws also create an obligation for schools to address discrimination and harassment when they interfere with students’ access to education, without limiting that obligation to conduct that occurs on campus.

The school district rejects any suggestion that allowing schools to regulate off-campus speech will create a danger of censorship. Schools, the district emphasizes, can regulate off-campus speech “only when students direct that speech at the school environment.” The court’s decision in Tinker, the school district writes, also “bars schools from punishing speech — whether on campus or off — based on disagreement with the message expressed.”

In her brief on the merits, Levy urges the court to draw a bright line between speech that occurs “at school” – on school grounds or at school events, and while students are going to and from school — and speech that does not. It is well established, she explains, that restrictions on the content of speech are presumed to be unconstitutional, even if the speech is offensive and even if the restrictions are intended to protect children. But the Supreme Court in Tinker allowed schools to regulate speech at school because the school environment is special – among other things, schools are responsible for students when they are at school.

Although the Tinker rule works when it is limited to school, Levy concedes, allowing schools to apply it outside of school would open a Pandora’s box of problems. Under the school district’s rule, she contends, students would effectively be subjected to “Tinker’s vague ‘disruption’ standard 24 hours a day, 365 days a year.” That prospect, she argues, would discourage students from “saying anything that school authorities might deem controversial, critical, or politically incorrect, and therefore disruptive.” And students who are disciplined for important off-campus speech – for example, posting photos on Twitter about the lack of social distancing in school hallways during the COVID-19 pandemic or criticizing other students’ racist messages – often will not have the money to go to court to challenge the punishment.

The school district’s efforts to limit its rule to speech that is “directed” at the school is, Levy asserts, “no restriction at all.” In practice, she reasons, it would apply whenever a student speaks to another student or whenever a student speaks about school, as this case shows: Levy posted her message on Snapchat only to a self-selected group of “friends.” None of those “friends” provided the message to the school; someone else did. But the school district contends that the snap was “directed” at the school because Levy referred to “cheer” and “school.”

Nor does the expansion of social media and online communications justify the extension of Tinker to off-campus speech, Levy tells the justices. And indeed, although the school district contends that the internet has blurred the line between on- and off-campus speech, its proposed rule would allow schools to limit all kinds of off-campus speech – not just speech that occurs online. Levy also assures the justices that they do not need to expand Tinker to ensure that schools will be able to address problems like threats, harassment and bullying when they occur off campus but have an effect on campus. Those problems, Levy stresses, can be addressed using traditional First Amendment doctrines.

The views of other groups

Because of its significance, the case has attracted a wide array of “friends of the court” briefs.

The federal government filed a brief that tries to stake out a middle ground. The Biden administration’s acting solicitor general, Elizabeth Prelogar, contends that the Supreme Court’s cases involving student speech “have focused on the consequence of students’ speech on other students and school activities, not the precise time or location at which the speech occurs.” And as a general rule, Prelogar argues, school officials can’t hold students responsible for their off-campus speech. But, she continues, the 3rd Circuit was wrong to hold that schools can never discipline students for their off-campus speech. Some off-campus speech that could be regarded as school speech, Prelogar suggests, includes speech that threatens the school community or intentionally targets specific members, functions or programs of the school community. Stressing that the federal government would not weigh in on whether Levy’s snap fell into one of these categories or whether it was disruptive, Prelogar urges the justices to invalidate the 3rd Circuit’s ruling and send the case back so that the lower court can take another look at the case in light of these principles.

Supporting the school district, the Cyberbullying Research Center tells the justices that, because of the internet, the “means and methods of modern-day bullying are far more sophisticated and online bullying (‘cyberbullying’) is an increasingly troubling phenomenon.” Although this case is about cheerleading, the center notes, “the stakes in this case are far higher”: “schools’ ability to confront bullying is, quite literally, a matter of life and death for roughly 56 million children” in U.S. public schools.

One brief supporting Levy comes from the conservative Alliance Defending Freedom, which notes that “religious students both on and off campus often find themselves persecuted because of their speech.” The ADF urges the justices to “make clear that schools cannot regulate speech based on the effects that speech has on its listeners.” In another brief supporting her, advocacy groups for college athletes argue that the school district’s proposed rule would “result in ‘open season’ on whistleblowers within high school and college athletics,” because – under the school district’s rule – complaints about a college’s athletic program would be “a punishable act of ‘disruption’ unprotected by the First Amendment.”