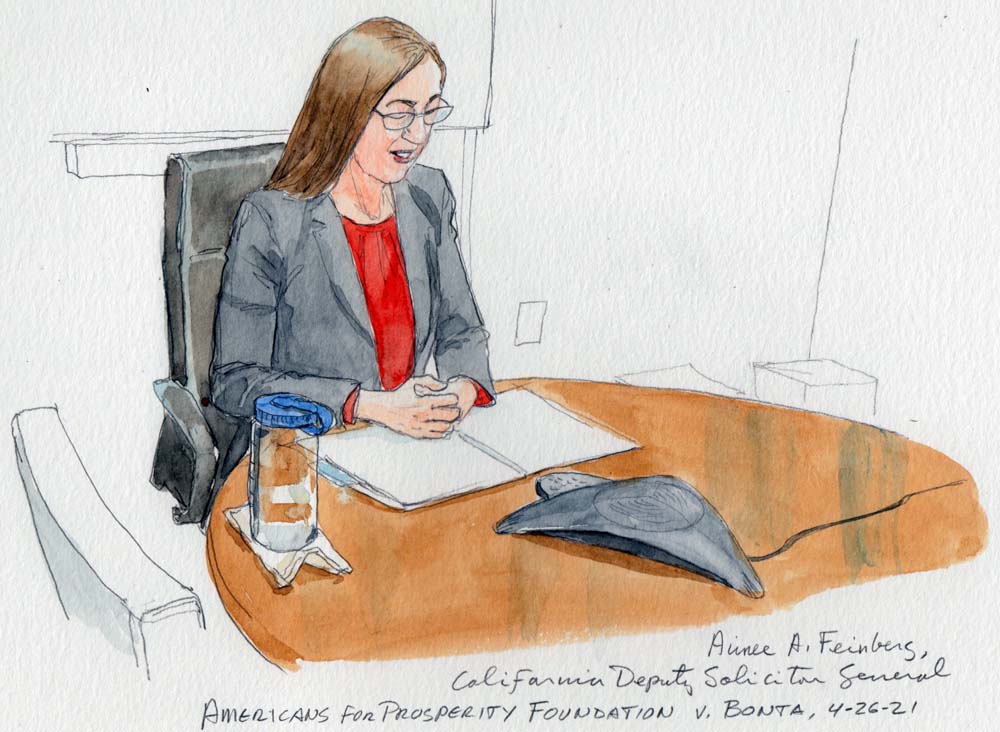 The Supreme Court on Monday seemed poised to side with two conservative groups challenging the constitutionality of California’s requirement that charities and nonprofits operating in the state provide the state attorney general’s office with the names and addresses of their largest donors. The requirement, the state insists, helps it to police charitable fraud. But two nonprofits argue that the rule violates the First Amendment by discouraging their donors from making contributions. After nearly one hour and 45 minutes of oral argument in Americans for Prosperity Foundation v. Bonta (consolidated with Thomas More Law Center v. Bonta), there seemed to be a majority on the court that was skeptical of the requirement and willing to strike it down, either in its entirety or, at a minimum, as it applies to the two nonprofits.

Derek Shaffer represents the Americans for Prosperity Foundation, a nonprofit group linked to the conservative billionaire Charles Koch, and argued on Monday on behalf of both the foundation and the Thomas More Law Center, a conservative public-interest law firm. Shaffer told the justices that the demand by the California attorney general’s office that charities submit a copy of their federal tax return, including a copy of Schedule B, a form used to report major donors, casts “a profound nationwide chill” “for no good reason.” Even when the attorney general’s office actually reviews the Schedule B forms, Shaffer contended, the forms have “only trifling utility” that does not begin to justify the First Amendment intrusion that results. 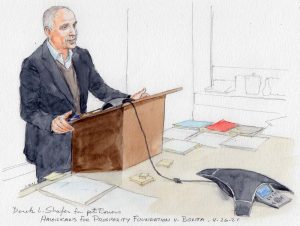 Justice Sonia Sotomayor was more sympathetic to the state’s rationale for needing the Schedule B forms. If the attorney general’s office has to issue a subpoena or audit letter to charities that it suspects of wrongdoing, she told Shaffer, doing so will tip off fraudsters, who will then take steps to hide their illegal conduct. Requiring everyone to submit their Schedule B forms, on the other hand, she posited, saves time and helps them to identify potential fraud. If the state has shielded the forms from disclosure, Sotomayor concluded, what is the problem?

Justice Brett Kavanaugh was unconvinced. Only a few other states impose a similar requirement, he pointed out to Elizabeth Prelogar, the Biden administration’s acting solicitor general, who urged the court to send the case back to the U.S. Court of Appeals for the 9th Circuit for another look at the potential harm to these groups’ donors if their identities were revealed. Doesn’t the fact that 46 states have not sought this information, Kavanaugh suggested, indicate that the state’s interest is not particularly strong?

Prelogar resisted, telling Kavanaugh that the requirement shouldn’t be struck down “based on a headcount.” States can have different priorities, she stressed, and a state like California can decide to devote more resources to regulating charities because of the sheer number of charities that solicit or do business in the state.

Justice Stephen Breyer expressed concern about the broader implications of the court’s ruling, including for campaign-finance laws. If you win, he told Shaffer, the Supreme Court will have held that a donor’s interest in maintaining privacy and the interest of the charity outweigh the state’s interest in having a law on the books “that frightens people into behaving properly.” How is this different, Breyer asked, from campaign-finance laws, where there is an even stronger interest in donating anonymously?

Kavanaugh asked Shaffer whether he could distinguish California’s collection of donor names and addresses from the collection by the IRS itself. Shaffer conceded that the IRS has a stronger case – because, among other things, it is required to collect the information by law and does not post submissions online – but he declined to expressly say that the IRS requirement was constitutional either, describing it only as a “different case.”

Although Thomas More and Americans for Prosperity urged the justices to strike down the disclosure requirement in its entirety, the justices spent considerable time debating what sort of challenge was more appropriate: a challenge to the requirement in its entirety (known as a “facial” challenge) or a more limited challenge to the way in which the requirement applies to the two groups. In response to a question from Justice Neil Gorsuch about why a facial challenge would be proper, Shaffer contended that any victory would otherwise be a “pyrrhic” one. The groups have been litigating this challenge for seven years, he emphasized. If everyone subject to an unconstitutional application of the requirement has to go to court, he said, the First Amendment will have lost its meaning.

Justice Elena Kagan questioned Shaffer’s premise. What if a lot of donors aren’t concerned about whether their names are publicly disclosed, and some even “rather like” having them disclosed? If that were the case, could you prevail on a facial challenge?

Shaffer maintained that the groups could. But later Justice Amy Coney Barrett observed that over 250 organizations had joined “friend of the court” briefs supporting Thomas More and Americans for Prosperity. How many organizations, she asked, would be enough to make a challenge a facial challenge? Barrett, as expected, participated in Monday’s argument despite calls from three Democratic lawmakers for her to recuse herself from the case. In an April 16 letter, the lawmakers wrote that Barrett has a conflict of interest because an advocacy group related to the Americans for Prosperity Foundation financed a significant advertising campaign to support Barrett’s Supreme Court confirmation.

If some justices were dubious about whether the case could proceed as a facial challenge, others were equally skeptical about the difficulty of prevailing on an “as-applied” challenge. Chief Justice John Roberts pressed Prelogar to explain the logistics of an as-applied challenge. Should a charity that wants to seek an exemption from the disclosure requirement, Roberts asked, “attach an affidavit,” “saying we’re a very controversial charity and we think, if” our donor records were made public, it would deter people from donating?

Justice Samuel Alito focused on the federal government’s argument that the case should be sent back to the court of appeals for it to consider harm to donors if their identities were publicly disclosed. But the district court, Alito told Prelogar, found “ample evidence” that they would be harassed. What more, Alito concluded, would these two groups have to show?

Barrett chimed in. What if the groups had filed their challenge immediately, before any harassment had actually occurred? How would the state determine then whether the requirement had discouraged donations? Would the possibility of harassment be different, Barrett asked, in California than in Alabama?

Justices on both ends of the ideological spectrum also voiced concerns about the state’s ability to keep the information contained in the Schedule B forms confidential, and what that might mean for a charity’s ability to argue that the disclosure requirement was unconstitutional as applied to it. Alito was the most vocal on this point. He told Aimee Feinberg, California’s deputy solicitor general, that a friend-of-the-court brief by the American Civil Liberties Union indicated that the justices should regard the state’s system as, in essence, a public disclosure system because so many significant breaches have occurred. When the state has been so “grossly negligent,” Alito said, why isn’t it reasonable for donors to assume that it may happen again, and to be wary of giving?

When Feinberg responded that the disclosure requirement is not a public one, such that there is no prospect that the information would be disclosed, Alito responded by asking, “So no as-applied challenge can ever succeed because you have a private disclosure system?”

Sotomayor acknowledged that the attorney general’s office had improved its procedures to protect donor privacy. However, she said, the district court in this case concluded that donors might still be concerned about past breaches. “What,” Sotomayor asked, “do we do with that finding?”

Kagan expressed doubt about California’s position. The district court, Kagan noted, said there was a pattern of inadvertent disclosures, leading to likely harassment of donors. In light of those two findings, she asked Feinberg, how can you win on an as-applied challenge?

Although it is hard to make predictions based on the oral argument, particularly when the justices are hearing oral argument by telephone, it was difficult after nearly two hours on Monday to see five votes to uphold the disclosure requirement in its current form. A decision in the case is expected by late June.