In Paulina v. Leontes, Breyer presides over a trial inspired by the Bard 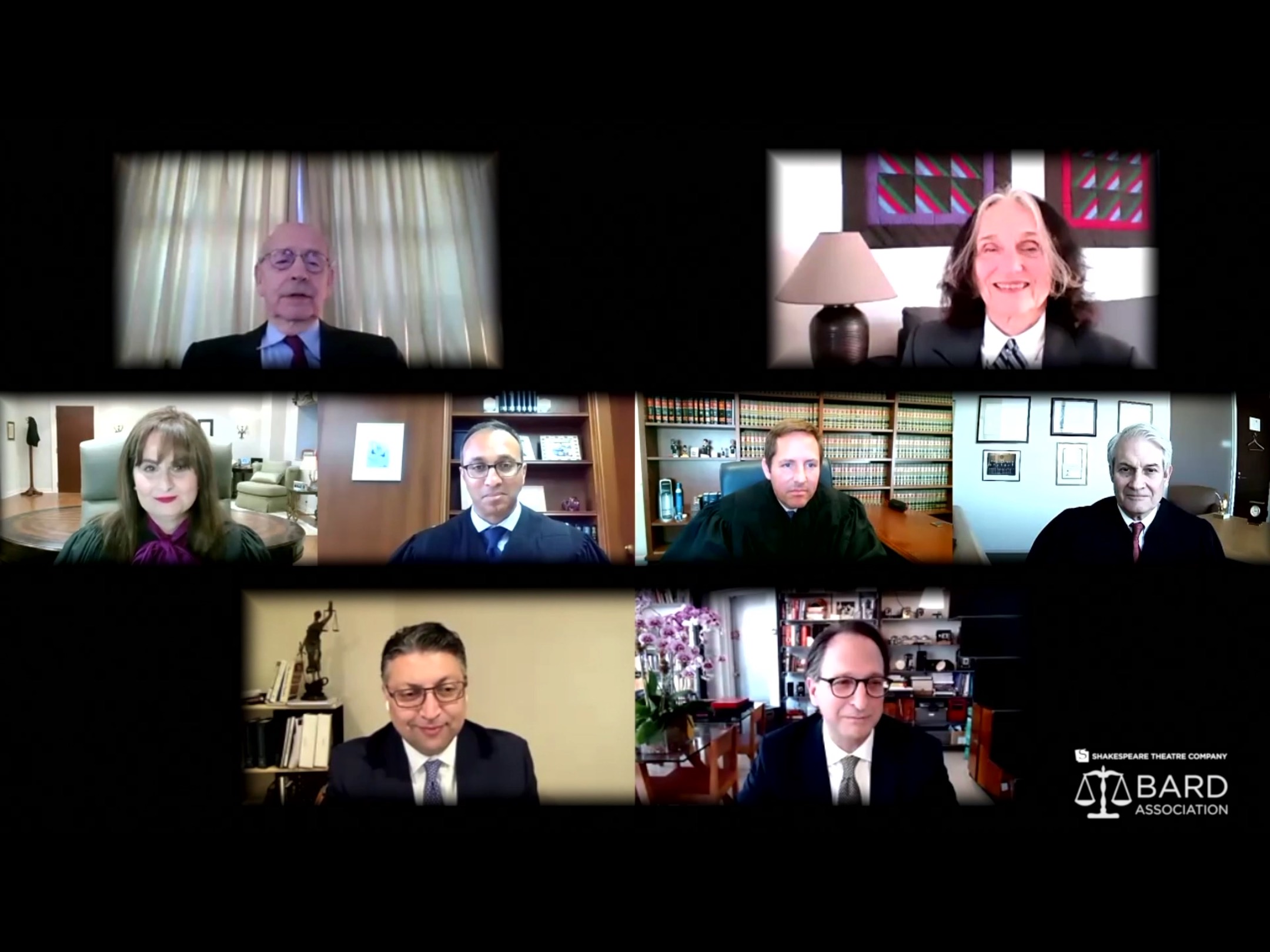 “So I just want to say I’m actually a bear, and I’m not a lawyer,” pronounced Andrew Weissmann, counsel for petitioner Paulina, in a bear filter on Zoom (or, perhaps, pronounced a bear in an Andrew Weissmann filter). That’s how oral argument started Thursday night in the 35th mock trial presented by the Shakespeare Theatre Company, with Justice Stephen Breyer presiding. The source material for this trial, The Winter’s Tale, holds one of Shakespeare’s most famous stage directions (“Exit, pursued by a bear”) which, happily coinciding with the recent lawyer cat phenomenon, left no want of animal material for counsel and bench to poke fun. Perhaps Paulina was colluding with the bear, or perhaps King Leontes was in fact a bear in a man’s costume.

Ursine shenanigans aside, Breyer and four lower-court judges – sitting as the Supreme Court of Sicily – had much to consider at Thursday’s mock trial, a twice-a-year event that irreverently explores legal themes inspired by Shakespeare. The Winter’s Tale scenario was based on a certain re-imagining of the play’s main plotline. Queen Hermione, long thought to be dead, was reunited with Leontes after being held in confinement by Paulina. The couple discovered that Paulina had lied to them for 16 years in order to keep them apart. Paulina, however, maintained that the long separation was for Hermione’s safety – and that the conditions of her confinement were “gracious and refined.” Leontes and Hermione sued Paulina for damages for loss of consortium and emotional distress, and the lower courts ruled in favor of the couple. Paulina came to Sicily’s highest court, asking both the court and the audience to consider whether (1) her speech and related actions were protected by the First Amendment, and (2) there was sufficient evidence that she intended to inflict emotional distress on the plaintiffs.

Weissman (who in real life is an attorney at Jenner & Block and was a lead prosecutor in Special Counsel Robert Mueller’s investigation) presented a two-pronged (and limerick-filled) argument: Paulina’s actions were rational, given her beliefs and experiences, and to do otherwise would have been irrational. Leontes was not only a man who engaged in a “Lock her up” campaign against his pregnant wife, banished his infant daughter to the hinterlands with as much chance of survival as “Snowflake in Houston,” and ordered his childhood friend Polixenes killed out of a delusion that Polixenes and Hermione were having an affair – he was also king of Sicily. The lower courts were his courts – he was the law. Paulina had tried to reason with Leontes before taking more drastic actions, but that resulted in the banishment of his daughter. “Fool me once, shame on Leontes; fool me twice, shame on Paulina,” Weissman told the court. Indeed, the 16 years the couple spent apart seemed to improve their relationship, and the pain felt would pale in comparison to that of spending four months together at home during a pandemic (in this case, the Black Plague, of course).

Makan Delrahim, a former assistant attorney general for the antitrust division of the Justice Department, represented Leontes and Hermione. He opened deferentially to the opposing counsel, quoting Justice Ruth Bader Ginsburg’s famous marriage advice: “In every good marriage, it pays sometimes to be a little deaf.” But, just as “Lord Artemis Laffer” has shown in his Laffer curve that raising the tax rate above a certain point decreases tax revenue, so too would too long a separation and deafness in a marriage lead to “heartache and irreparable distress.” Leontes was not perfect, but his jealousy and suspicions might be excused from having binged nine months of the “Merry Housewives of Windsor,” followed by the “Real Housewives of Athens,” on Sicily-flix, with Polixenes. In addition, Delrahim noted, Leontes is a defender of the Constitution, including the freedom of speech, as evidenced by his own penchant for litigation (see the trial of Hermione).

The distinguished bench questioned the strength of certain claims. From Judge Amit Mehta of the U.S. District Court for the District of Columbia: What was the essential difference between the relationship of the antitrust enforcement division and Facebook (unnamed) versus that of Paulina and Leontes such that the same free-speech protections did not apply to Paulina? From Breyer: What are the damages, and how was anybody hurt? After all, the tale’s resolution was undeniably a happy one, and Hermione spent her time in confinement watching the “Real Housewives of Bridgerton.” From Breyer and Judge Joshua Deahl of the District of Columbia Court of Appeals: Was Hermione in fact turned into a statue, as depicted in the play? And if so, can there be damages? Loss of consortium does not apply to statues.

After a short recess, the Supreme Court of Sicily issued a fractured decision – or, as Breyer put it, “four, five, or six separate verdicts, which will be put in a totally confusing way, and thus you’ll know we have paid our normal adequate attention to the case.” The justices decided to throw out the first question presented, dismissing it as “improvidently granted.” On the second question, they ruled 3-2 in favor of Leontes and Hermione. Breyer and Deahl were in the dissent, not quite convinced, or convinced at all, that the plaintiffs had suffered any actual damages. But as is sometimes the case with decisions of supreme courts, the outcome did not reflect majoritarian sentiment: The audience vote was 71% in favor of Paulina. Apparently for most court watchers on Thursday, Paulina’s advocate succeeded in bearing the burden of proof.