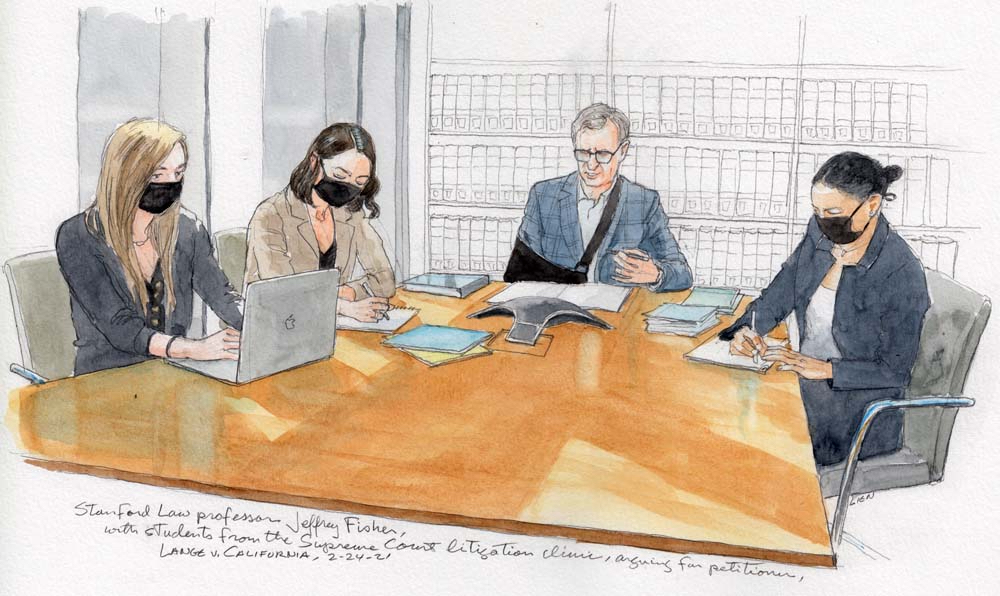 The Supreme Court heard oral argument on Wednesday in the case of Arthur Lange, a northern California man convicted of driving under the influence of alcohol. The evidence used to convict Lange was obtained by a California highway patrol officer, who had followed Lange in his car and then on foot into his garage. The question before the justices was whether the officer violated the Fourth Amendment when he went into Lange’s garage without a warrant, or whether the entrance was instead justified because the officer was in “hot pursuit” of Lange. At one point during the nearly two hours of argument by four different lawyers, Justice Stephen Breyer observed that the dispute before them was a “tough case.” Further complicating the justices’ decision was the sentiment that, at least for some of them, their actual ruling might not make much of a difference in practice. 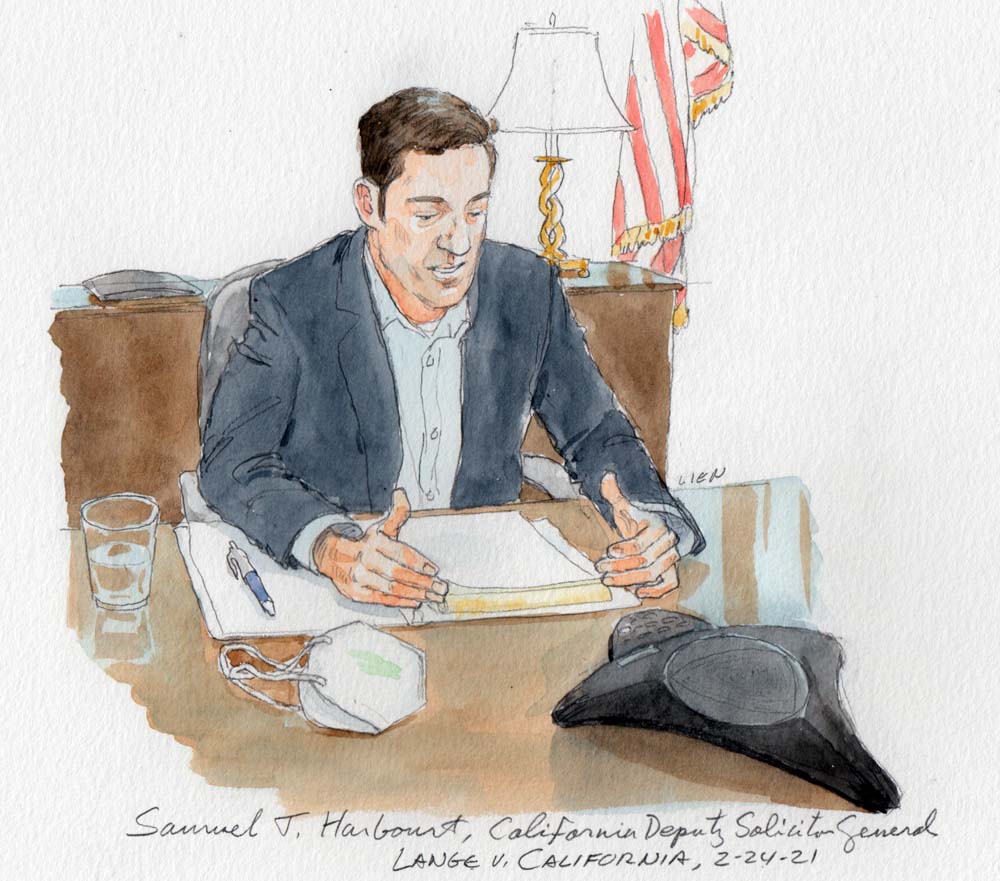 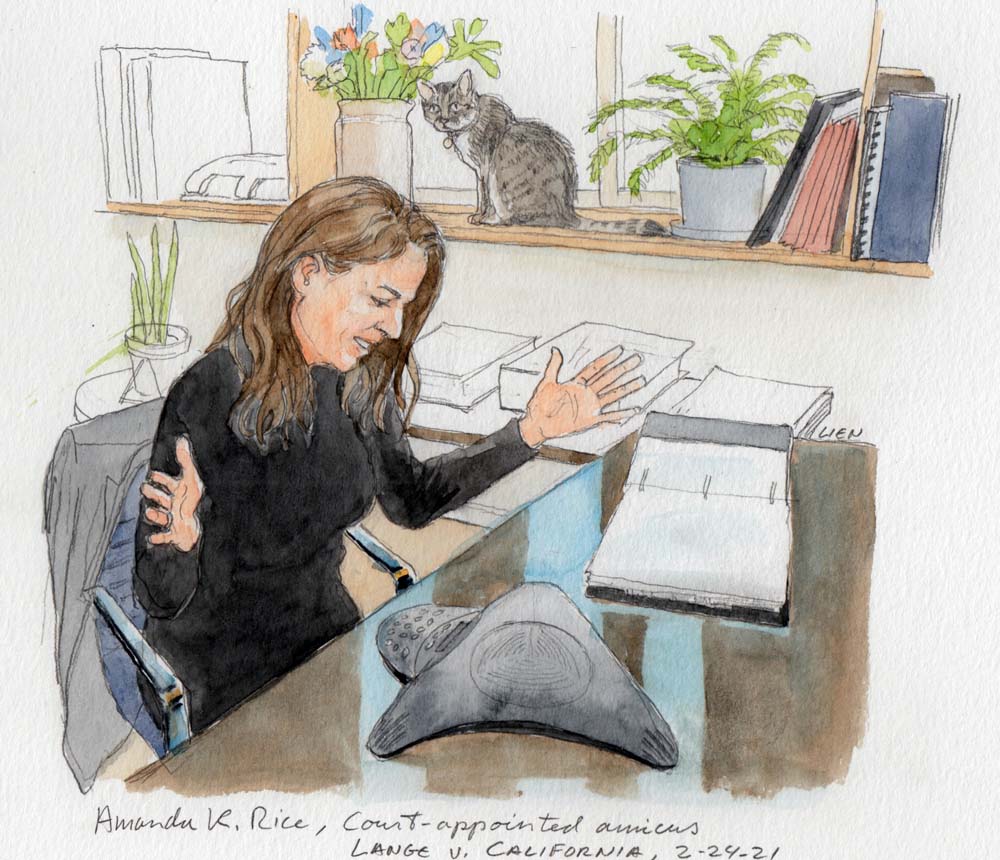 The case before the court on Wednesday began in 2016, when Lange was driving in his car near his home in Sonoma, California. By playing loud music and honking his horn, Lange caught the attention of officer Aaron Weikert, who followed Lange into his neighborhood and attempted to stop him as he neared his home. Lange, who later said that he hadn’t seen Weikert, continued into his garage and began to close the door behind him. Weikert, who had parked his car in the driveway, put his foot under the door to block it from closing and entered the garage, where he said he smelled alcohol. Lange’s blood-alcohol level was later determined to be 0.245%, more than three times the legal limit.

Lange tried to have the evidence obtained after Weikert entered the garage thrown out, on the ground that Weikert had violated the Fourth Amendment by following him into his home without a warrant. The trial court declined to do so, and a California appeals court upheld Lange’s conviction. It reasoned that Weikert had probable cause to arrest Lange for failing to pull over when Weikert turned on his overhead lights, which is a misdemeanor. Because Weikert was in “hot pursuit” of Lange, he was justified in entering the garage without a warrant.

In their briefs and at Wednesday’s oral argument, the four advocates staked out a range of positions. Arguing for Lange, law professor Jeffrey Fisher urged the justices to reverse the state court’s ruling, telling them that police officers pursuing a suspect should always have to get a warrant to enter the home – particularly in cases involving misdemeanors – unless there is a genuine emergency and no time to wait for a warrant.

The state of California, represented by the state’s deputy solicitor general, Samuel Harbourt, agreed with Lange that the Supreme Court should reject a categorical rule allowing police to follow a suspect who they believe committed a misdemeanor into a home without a warrant, but it would permit police to do so in cases involving felonies.

Because California did not defend the state court’s ruling, the justices appointed a “friend of the court,” Detroit lawyer Amanda Rice, to step in instead. She argued for a rule that would allow police to pursue a fleeing suspect into a home without a warrant regardless of the underlying offense.

Erica Ross, an assistant to the U.S. solicitor general, also argued on behalf of the United States as a “friend of the court” urging the justices to affirm the state court’s ruling. The government contended that, at a minimum, there should be a general presumption that police can follow someone who they believe committed a misdemeanor into a home without a warrant.

As with other arguments conducted by telephone, using a format in which each justice takes a turn asking each lawyer questions, it was hard to know exactly how the justices might ultimately vote. But several themes emerged among the justices’ questions. One major concern for several justices was how to decide the case in a way that provided a workable rule for police officers going forward.

Chief Justice John Roberts, for example, noted that a categorical rule that distinguished between felonies and misdemeanors could prove problematic because, he said, the line between felonies and misdemeanors can be hard to draw and “sometimes counterintuitive.” Drunk driving, Roberts observed, might not be a felony on the first offense but could be on the third offense.

Breyer pointed to what he viewed as a related difficulty a few minutes later. In Massachusetts, Breyer told Harbourt, a misdemeanor is defined as a crime with a sentence of up to two-and-a-half years, and can include some fairly serious offenses, including reckless driving that leads to a death. In California, by contrast, Breyer said, misdemeanors are reserved for minor offenses.

Justices Sonia Sotomayor and Elena Kagan followed up with similar points. Because some felonies, Sotomayor suggested, aren’t dangerous and don’t create exigent circumstances, there is no reason to distinguish between felonies and misdemeanors. Wouldn’t the better rule, Sotomayor queried, be to require police to make a case-by-case determination in each situation?

Kagan posited that the line between felonies and misdemeanors may be artificial. Instead, she indicated, the more relevant distinction, for purposes of whether a warrantless entry into a home is appropriate, is whether the underlying offense for which a suspect is being pursued is violent. Indeed, she noted, most domestic violence offenses are misdemeanors, while most white-collar crimes are felonies.

Justice Samuel Alito proposed a different rule altogether, which likely would lead to the evidence against Lange being suppressed. Reasoning that when a suspect takes refuge in a house there are “strong reasons for not waiting for a warrant” – including the additional resources required to surround the house while officers wait – he suggested that police officers be allowed to enter a home without a warrant only when they are truly in “hot pursuit.”

But in Lange’s case, Alito continued, there wasn’t a chase and he didn’t flee. Although the state court ruled that a reasonable person would have known that Weikert was trying to stop him, Alito was skeptical, particularly given Lange’s high blood-alcohol levels. A rule limiting warrantless entries to genuine “hot pursuits” would, Alito concluded, “go a long way toward preventing warrantless arrest for minor infractions.”

The justices also considered whether and to what extent the various proposed rules would be consistent with the state of the law at the time the Fourth Amendment was drafted, which some justices regard as essential to interpreting the amendment. Justice Neil Gorsuch observed that during the Founding era, there was no rule allowing police to enter a home without a warrant to pursue an individual suspected of committing a misdemeanor. If that’s the case, Gorsuch asked Rice, “[w]hy would we create a rule that is less protective than what everyone understands to be the case of the Fourth Amendment as an original matter?”

The justices worried aloud that the mere fact that the suspect flees into a home in an effort to avoid arrest would create an emergency that would justify allowing police to enter the home without a warrant. Fisher tried to quell those concerns, stressing that not all scenarios involve exigent circumstances and that police may have other options, including knocking on the door or getting a warrant, which can often be accomplished quickly.

Roberts remained dubious, telling Fisher that once a suspect flees into a home police are really “in a dangerous situation,” because the suspect could use even a brief amount of time to obtain a weapon, for example.

Sotomayor echoed Roberts’ thought, saying to Fisher that she was “trying to figure out what circumstances would not justify” a warrantless entry by police. Wouldn’t the fact of the “hot pursuit,” standing alone, create a sense of urgency?

Fisher agreed that the facts would “certainly lean” in that direction, but he resisted any effort to draw a categorical rule as a result, citing specific cases in which police officers tried to stop someone who would not pose a danger or create a sense of urgency – for example, a woman driving alone at night, who became frightened and tried to run in her mother’s house when a police officer pulled up behind her.

Rice agreed with Kavanaugh that “the fact of the suspect’s flight is itself an exigency” and so is likely to weigh in favor of allowing the police to enter the home without a warrant in every case. However, she urged the justices to adopt a categorical rule to spare police officers and courts from having to make such determinations on a case-by-case basis. Whether the justices will do so remains to be seen.