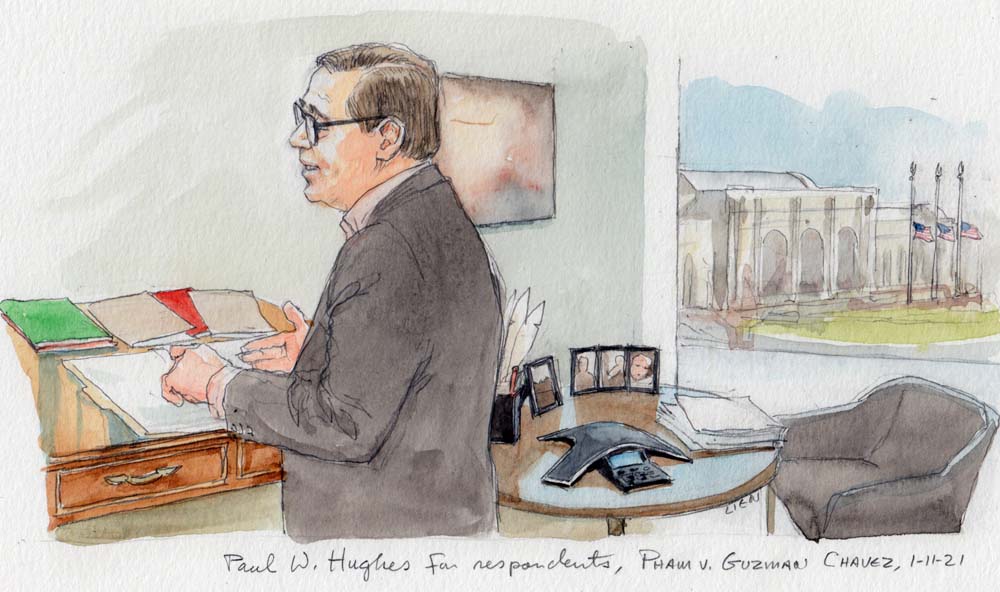 The Supreme Court heard argument on Monday by telephone in Pham v. Guzman Chavez, which raises a complex question about bond for migrants in removal proceedings. The justices asked hard questions of both sides.

Paul Hughes, counsel for respondents, phones in to argue with a view of Union Station in the background (Art Lien)

The case involves migrants with “reinstated” removal orders, meaning they were previously deported, subsequently returned to the U.S., and now have pending claims for the “withholding” of their deportations based on a fear of torture in their country of birth or citizenship to which they would otherwise be removed. These noncitizens cannot be removed until their withholding claims are resolved, a process that can take months or years. The court must decide which of two federal statutes governs these migrants’ eligibility to be released on bond.

The migrants argue that the more permissive bond process of 8 U.S.C. § 1226 governs; it applies “pending a decision on whether the alien is to be removed,” and generally neither requires a period of detention nor mandates supervision if a person is released. The government contends that 8 U.S.C. § 1231 controls. That section, which deals with the actual process of removal, generally applies “when an alien is ordered removed” and the order is “administratively final.” It imposes a 90-day mandatory detention period followed by a discretionary, restrictive release authority. Both parties agree that the migrants at issue are subject to valid removal orders, but that those orders cannot be executed as the withholding claims work their way through the system.

During Monday’s argument, the parties confirmed important information about the reality of the process. Withholding relief is very limited; migrants may be removed to any other country in the world where they are not subject to torture. But Assistant to the Solicitor General Vivek Suri, arguing for the government, acknowledged in response to a question by Justice Elena Kagan that the migrant must have notice and an opportunity to object before such a removal. And Suri agreed with Chief Justice John Roberts that “in the vast majority” of cases there is no available third country, so a grant of withholding relief, for practical purposes, means the migrant will remain in the United States indefinitely. Suri also told Justice Stephen Breyer that about 11% of applicants for withholding relief received it, what Breyer described as a “fairly good but not overwhelming percentage.” And Suri was not sure about, but did not dispute, a study cited by the migrants that 15% of withholding applicants were released at some point before their withholding proceedings were complete.

Six justices — Roberts, Breyer, Kagan, and Justices Clarence Thomas, Sonia Sotomayor and Brett Kavanaugh — pressed Suri on the question of how a removal order that was admittedly incapable of execution could nevertheless be regarded as “final” for purposes of triggering Section 1231. In his closing remarks, Suri conceded, “They’ve got some reasonable arguments under Section 1226. How can you say that … there’s been a decision about whether to remove someone when it’s not clear that there’s any country available?” However, he had responses to his own rhetorical question. One was technical: “Our position turns on what is true in the eyes of the law, not what ends up happening in practice.” A valid removal order triggers the consequences of a valid removal order; nothing in Section 1231 says in so many words that it applies only if it can be carried out. Indeed, the section authorizes release after the 90-day mandatory detention period if removal does not occur, so it seems to contemplate the possibility of non-removal.

Suri’s second response was that Section 1231 made sense in this context because the language obligating the government to carry out removal applied “except as otherwise provided.” His apparent point was that since Section 1231 provides for withholding claims and a pause on the removal process as those claims are reviewed, migrants presenting withholding claims are an exception to the statute’s assumption that those subject to it will be removed, but, again, not an exception to the section as a whole.

Paul Hughes argued for Maria Angelica Guzman Chavez and other similarly situated migrants. Hughes argued that the “except as otherwise provided” language in Section 1231 pointed in precisely the opposite direction. Until the withholding claims are resolved, noncitizens are excepted not only from removal, but from mandatory detention to carry out removal. “Withholding relief is provided for in 1231. When there is withholding, the government cannot remove, meaning there is no removal period,” Hughes told the justices.

Breyer was concerned about long-term detention of withholding applicants; “by and large, we don’t keep people in prison for years, whoever they are … without any chance of even getting bail.” Suri pointed out that bond was available after 90 days under Section 1231. He also underscored the availability of habeas corpus relief under Zadvydas v. Davis, a 2001 decision in which the Supreme Court recognized an opportunity for those detained under Section 1231 to seek judicial review once it appeared that there was no significant likelihood of removal.

Kavanaugh, Sotomayor and Kagan followed up on the relevance of Zadvydas. Suri contended that Zadvydas alleviated any constitutional problems with Section 1231. Hughes, on the other hand, took the position that the more lenient Section 1226 applied in this context under ordinary principles of statutory interpretation. But if there were any question, Hughes concluded, the fact that habeas corpus would be necessary, on the government’s reading, is a strong reason to conclude that that reading is wrong. Based on the principle of constitutional avoidance, he said, “it makes the most sense to infer that Congress chose a statutory structure that was not going to lead to routine and predictable constitutional violations” that would require relief through habeas corpus.

How could an order be final for purposes of Section 1231, Gorsuch asked, when it was not final for Section 1252, the judicial review provision? “Surely, a final order of removal can’t mean one thing  … in one statute and another in another. That would — that would seem unlikely at least. So perhaps you can help me with that difficulty.” Suri responded that “‘final’ can mean different things in different contexts.” If forced to choose, however, Suri took the position that “these orders are final both in this context and in that context, and the aliens would lose in both cases” — that is, that there could be no judicial review of withholding claims in the context of reinstated removal orders. That is a position the United States did not otherwise advance, that no circuit has taken and that none of the justices pursued at argument.

In her questions to both sides, Justice Amy Coney Barrett focused on statutory nuances. She asked Suri why, under Section 1231, when through no fault of either side a noncitizen could not be removed, there was not a presumption in favor of release. Suri responded that “relief is the default” under the statute, but “because these particular aliens have already been removed from the country, have defied their removal orders, and have come back into the country illegally and been caught, there’s a particularly strong basis for concluding that those aliens are a flight risk.” With Hughes, Barrett made the point that the differences between Section 1226 and Section 1231 were largely due to implementing regulations, not the statutory text itself. While Section 1226 permits release without conditions and Section 1231 requires conditions, the remainder of the process, such as whether a neutral immigration judge will make the decision, is based on discretionary judgments of the attorney general and the Department of Homeland Security by regulation. It is not clear which side that fact favors in Barrett’s view.

Justice Samuel Alito asked Hughes how much of his argument turned on the practical operation of the statute: that, in practice, those granted withholding relief were unlikely to be removed from the country. Hughes acknowledged that his argument would not apply to noncitizens if there was a third country available, because the United States would expeditiously remove individuals to those countries, and there would be no question of detention. The implications of Alito’s question may have been broader — namely, that there is an argument that the meaning of a statute is fixed at the time of enactment, and cannot be altered or even construed based on later-occurring events. This line of reasoning would seem to favor the government.