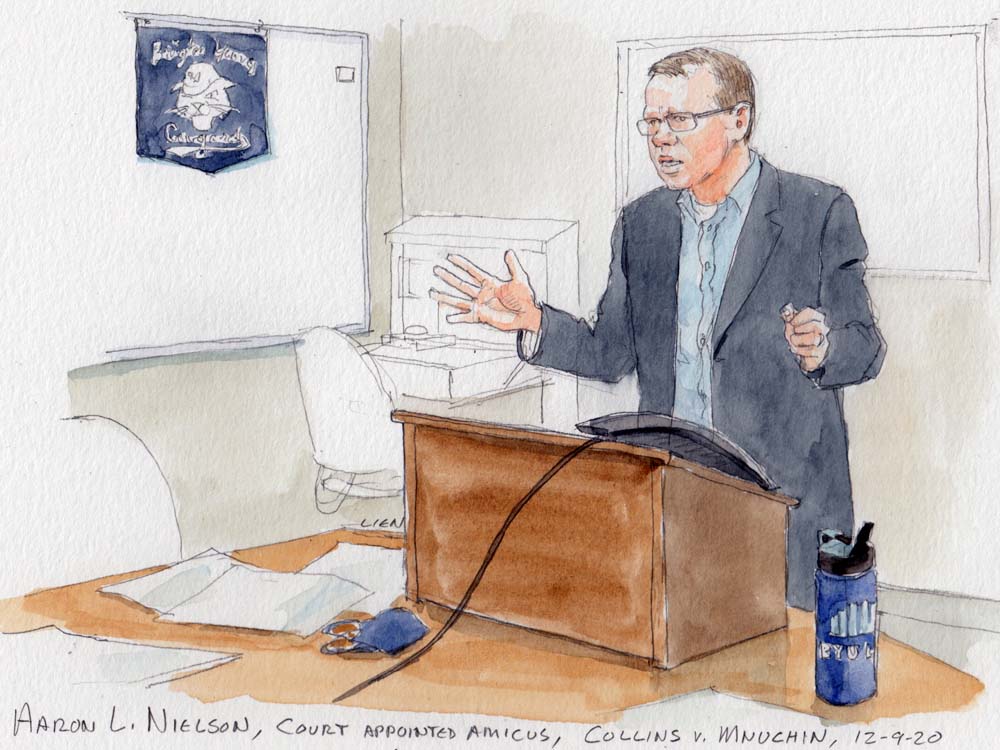 The Supreme Court heard oral argument on Wednesday in a high-stakes battle over the regulation of mortgage giants Fannie Mae and Freddie Mac in the wake of the 2008 housing crisis. Shareholders in the company have challenged both the constitutionality of the Federal Housing Finance Agency, which Congress created to oversee the two companies, and the FHFA’s 2012 agreement with the Treasury Department, which the shareholders say “nationalized” Fannie and Freddie. After nearly two hours of debate, the justices did not seem inclined to strike down the agreement on the ground that the restrictions on the president’s ability to remove the FHFA director violate the Constitution. The justices appeared slightly more receptive to the shareholders’ claim that the FHFA and the Treasury Department did not have the authority to enter into the 2012 agreement, but they spent relatively little time on that issue, so it wasn’t clear whether there were five votes in favor of the claim.

Congress established the FHFA as part of the Housing and Economic Recovery Act, passed in 2008 to address the collapse of the housing market. Acting as the conservator of Fannie and Freddie, the FHFA entered into an agreement with the Treasury Department in which the department would provide up to $100 billion in funding for the companies in exchange for stock and (among other things) dividends tied to the amount of money it had invested in each company. The FHFA and Treasury changed that agreement four years later so that Fannie and Freddie would pay dividends tied to the companies’ net worth. That 2012 agreement is at the center of the cases now before the Supreme Court.

The question whether statutory restrictions on the president’s ability to remove the head of an executive agency violate the Constitution’s separation of powers is one with which the justices have recent experience. In June, the court struck down a provision of the Dodd-Frank Act that permitted the president to fire the head of the Consumer Financial Protection Bureau only for “inefficiency, neglect of duty, or malfeasance in office.” Because the head of the FHFA can only be removed by the president “for cause,” the shareholders contend, that structure is also unconstitutional – and the 2012 agreement should be invalidated.

Several justices questioned whether the court needed to weigh in on the constitutionality of the FHFA’s removal restrictions at all, when the decision to enter into the 2012 agreement was made by an acting director, who could be removed by the president for any reason. But even if the 2012 agreement was negotiated by an acting director, some justices then suggested, the court might still need to determine whether the removal restrictions are constitutional because a director was later confirmed, and that director took action pursuant to the 2012 agreement.

Hashim Mooppan, who serves as a counselor to the acting U.S. solicitor general, represented the federal government. He assured the justices that they did not need to reach this question because the shareholders had not challenged any actions taken by confirmed directors. Anything those directors would have done to carry out the 2012 agreement, Mooppan suggested, would have been “ministerial.”

Justice Amy Coney Barrett was among the justices who raised this point. If we agree with you that the 2012 agreement was negotiated by an acting director whom the president could remove at will, and so there was no constitutional problem, she asked Mooppan, but there was a problem with the director   who was confirmed later, would that create an issue even if the 2012 agreement was valid at its inception?

Brigham Young University law professor Aaron Nielson, whom the justices appointed as a “friend of the court” to defend the removal restrictions after the federal government declined to do so in the lower courts, agreed with Mooppan that the 2012 agreement is a “discrete thing” that would not implicate any conduct by a later-confirmed director.

When they turned to the case of confirmed directors, the justices had different views on whether the removal restrictions violate the Constitution — just as they did in the CFPB case earlier this year, Seila Law v. Consumer Financial Protection Bureau..

Justice Sonia Sotomayor seemed inclined to uphold the restrictions, telling Mooppan that she saw “vast differences” between the FHFA and the CFPB: The FHFA’s job is to put government companies under conservatorship, which is not an executive power or a “wide-reaching power that affects many entities.”

Justice Stephen Breyer seemed genuinely torn, reminding Nielson that he had dissented in the court’s earlier cases on this issue. “Should I, in a sense, throw in the towel?” he asked. “Should I stick to my prior dissent? Should I say, ‘This is different’? … What would you do?”

Much like Sotomayor, Nielson tried to distinguish this case from others with which the court had grappled. The conduct at issue in this case, he reasoned, is the act of a conservator – which even the Department of Justice concedes is not executive power.

But Justice Samuel Alito saw things differently. He reminded Nielson that many provisions of the Constitution are important because they affect ordinary people and promote accountability. The argument against your position, he told Nielson, is that the way in which the FHFA carries out its responsibility has a “profound effect” on the housing market and therefore on ordinary people.

Justice Elena Kagan appeared to side with Alito on this point. She chided Nielson for suggesting that the FHFA isn’t very important, contending instead that it has the wide range of powers envisioned by both the majority and the dissent in Seila Law: It makes rules, conducts enforcement and “plays a crucial role in overseeing the mortgage market.” And she resisted Nielson’s efforts to rely on the difference between the text of the removal restriction in Seila Law and the one now before the court, reminding him that the majority in Seila Law had cautioned against parsing the language of the restrictions.

If the justices do conclude that the restrictions on the removal of the FHFA director violate the Constitution, they will have to decide what remedy, if any, should be available for that violation. The federal government has argued that the removal restrictions should be excised from the Housing and Economic Recovery Act (the 2008 statute that created the FHFA), but the 2012 agreement should remain in place. Mooppan reiterated that position on Wednesday, telling Alito that – unlike in Seila Law – the treasury secretary was also involved in the negotiation of the agreement. Because he could be removed by the president at any time, Mooppan explained, there is no argument that the president didn’t have control over the transaction.

Sotomayor told Thompson that it was “perhaps illogical to say” that if the FHFA director must be removable at will, his clients should get anything more than a declaratory judgment to that effect. If the 2012 agreement was negotiated by two officials who answered to the president – the treasury secretary (who could be removed for any reason) and an acting director, Sotomayor reasoned, it isn’t clear how the removal restrictions affected the shareholders. Why, she asked, are you entitled to an unwinding of an agreement that was entered into for a valid business reason?

Some justices were clearly concerned that striking down the removal restrictions could have significant and undesirable ripple effects – calling into question, for example, the validity of the Social Security Administration’s leadership structure. Both Alito and Kagan asked whether, on the shareholders’ view, everything that the head of the SSA had ever done would be invalid.

Justice Neil Gorsuch told Thompson that his request to have the court invalidate the 2012 agreement was a “big one” and “hard for us to swallow.” Could a new and constitutionally appointed director, Gorsuch asked, ratify the actions of an earlier director whose appointment was unconstitutional?

The shareholders appeared to fare better on their challenges to the FHFA’s statutory authority to enter into the 2012 agreement.

The federal government contended that a provision in the Recovery Act known as the “succession clause” gives the FHFA, as the conservator for Fannie and Freddie, the sole right to bring a lawsuit on behalf of the company. Roberts disputed this assertion. “It seems to me,” he said to Mooppan, that the shareholders’ claims “are a little different” because their stock “was completely wiped out” in an action that was directed at them, rather than at the corporation as a whole.

Mooppan later tried to draw an analogy between an action that affected the size of a pie (which only the company would be permitted to challenge) and an action that affected the size of a share of a pie (which the shareholders could challenge). But Barrett was unconvinced that the court should import corporate law distinctions into administrative law cases like this one. The shareholders, she said, have a right to sue under the Constitution because they have a “pocketbook injury.” Why, she asked, do we care about corporate law?

The government had urged the court to reject the shareholders’ claims on a separate statutory ground, arguing that it was barred by the Recovery Act’s anti-injunction clause – which, as Mooppan explained, bars courts from restraining exercises of the conservator’s powers. Breyer pressed Mooppan on this issue, citing the shareholders’ contention that the government had nationalized Fannie and Freddie. “Whatever conservators do,” Breyer indicated, “they don’t nationalize companies.”

The justices spent relatively little time on the merits of the shareholders’ claims. Roberts questioned the shareholders’ assertion – which, he noted, they described as “nationalization” – that their stock in Fannie and Freddie was rendered essentially worthless. Shares in the two companies, he observed, are currently trading at over $2 per share, which suggests that the shares “are worth something.” Doesn’t that, Roberts asked, render your nationalization rhetoric “just that” – rhetoric?

During his time at the lectern, Nielson acknowledged that the court “is going to have to answer some very hard questions” in this dispute. As nearly two hours of debate demonstrated on Wednesday, the questions were indeed hard, and the answers were far from clear. A decision is expected sometime next year.