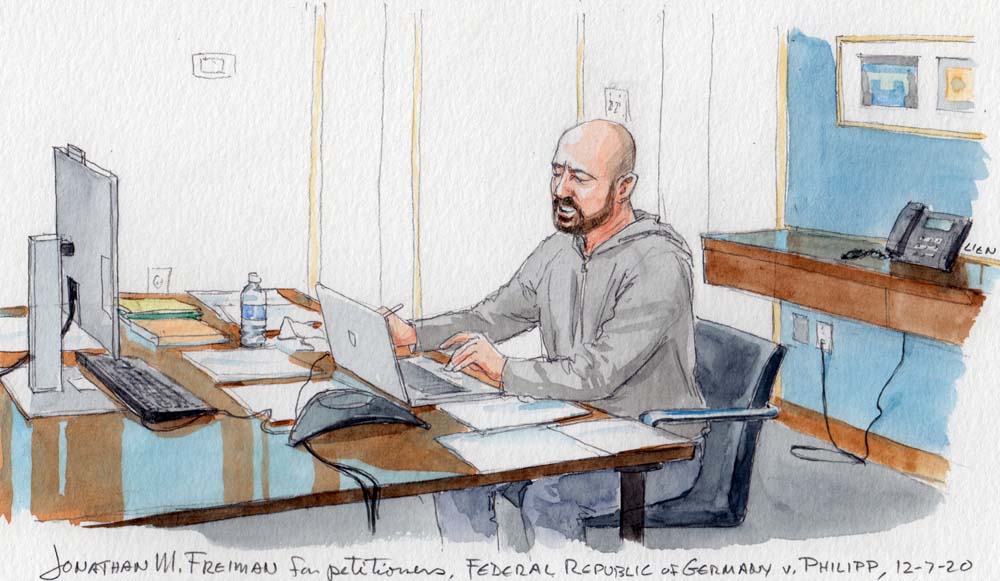 The Supreme Court heard oral argument on Monday in a dispute over a collection of medieval Christian art on display at a Berlin museum. The question before the justices in Federal Republic of Germany v. Philipp is whether the lawsuit, filed in Washington, D.C., by the heirs of several German Jewish art dealers who allege that the art was sold to the Nazis under duress, can or should go forward at all. The justices had tough questions for both sides, and when the case concluded after nearly 90 minutes of oral argument, it was not clear how the justices were likely to rule – a byproduct, perhaps, of the format that the court uses for remote arguments, in which each justice has a designated amount of time to question each lawyer. 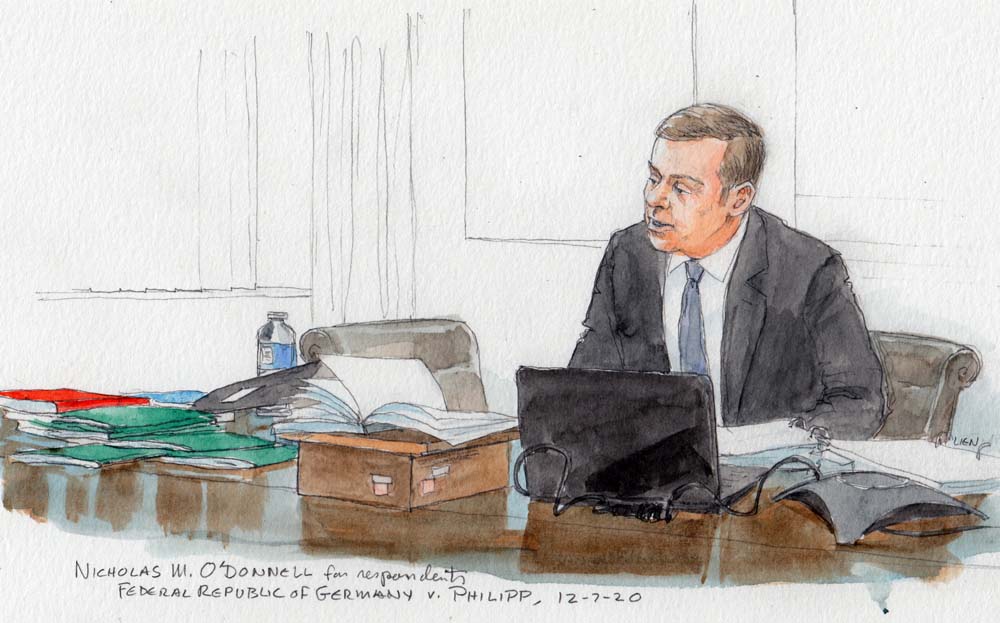 The art at the heart of the case is the Welfenschatz, known in English as the Guelph Treasure. The dealers, who lived and worked in Germany in the 1920s and 1930s, formed a consortium in 1929 to buy the collection, which included ornate crucifixes and portable altars. In the aftermath of the 1929 stock market crash, the consortium sold roughly half of the art, but it was unable to sell the other half until 1935, when it sold 42 of the 82 pieces in the collection to the Nazi-controlled state of Prussia for 4.25 million Reichsmarks, the equivalent of $1.7 million in 1935 dollars. The heirs argue that the sale was a forced one, at well below market value, while the German government counters that both the sale and the price were fair.

In their effort to recover the art, which is now valued at roughly a quarter of a billion dollars, the heirs went first to a commission created specifically by Germany to arbitrate Nazi-era claims. When the commission ruled for Germany, the heirs went to federal court in the United States, arguing that the art had been taken in violation of international law.

The Foreign Sovereign Immunities Act creates several narrow exceptions to the general rule that foreign governments cannot be sued in U.S. courts. This case involves one of those exceptions, known as the expropriation exception, which allows lawsuits against foreign governments when “rights in property taken in violation of international law are in issue.” The question before the court is whether the exception applies to claims that a foreign government took property from its own citizens within its own country.

Representing Germany, lawyer Jonathan Freiman told the justices that when it included the reference to “rights in property taken in violation of international law” in the FSIA, Congress intended only to refer to the international law of takings, which does not include cases in which foreign countries take their own citizens’ property. However, several justices pushed back against that argument, suggesting that the text of the exception applies more broadly and may include seizures of property as part of a genocide, which violates international law. Chief Justice John Roberts was the first to broach this possibility, followed quickly by Justice Clarence Thomas, who asked Freiman to “imagine that there’s a campaign” of genocide that includes “an effort to take all of the property, including jewelry, art, and even the extraction of gold teeth.” Thomas wanted to know if that taking would be subject to the expropriation exception from sovereign immunity.

Freiman insisted that the question for purposes of the FSIA is what Congress intended, and that the “gravamen” of what Thomas was describing was not a taking, but rather an act of genocide, which is not covered by the FSIA’s exception.

Justice Sonia Sotomayor pressed the argument again, reminding Freiman that the court normally relies on the “plain meaning” of the words in the FSIA, which refer to property taken “in violation of international law.” It seems clear, she said, that seizing property as part of a genocidal campaign would be an act of genocide (and thus violate international law), even when the property is taken from a country’s own citizens. “So,” Sotomayor queried, “why don’t we follow the plain meaning of the statute?”

Justice Elena Kagan echoed this point, telling Freiman that even if it was clear that Congress had the international law of takings in mind when it drafted the FSIA, the actual words that it used apply more broadly and seem to cover the situation in this case.

Justice Brett Kavanaugh quoted from Germany’s reply brief, in which the country acknowledged that it is “literally possible to read the exception to mean takings that violate any principle of international law.” Why, he asked Freiman, “isn’t that the end of the case”?

Some justices also expressed concern about the effect that Germany’s proposed rule would have on plaintiffs who had been stripped of their citizenship. Justice Samuel Alito was the first to raise this issue, asking Freiman whether the result would be different if the art dealers in this case had been stripped of their citizenship before the 1935 sale.

Freiman stressed in response that the art was owned by a consortium, rather than the dealers themselves, but Thomas returned to this point later on. He pointed out the difference in treatment between citizens and non-citizens, noting that the latter could sue under the FSIA but the former could not, while questions remain about a denaturalized or stateless person.

Although the justices did not seem particularly receptive to Germany’s argument that they should read the FSIA’s expropriation exception narrowly, they also appeared troubled by the lack of a limiting principle for the plaintiffs’ interpretation.

Arguing for the plaintiffs, lawyer Nicholas O’Donnell insisted that the exception would apply only to cases involving the seizure of property – and therefore would exclude, for example, allegations of torture. Responding to a question from Thomas, O’Donnell emphasized that it would not even apply to all cases of genocide. Here, he noted, the Nazis took the art as part of the effort to commit genocide, but the exception wouldn’t apply to a case in which the members of a group were killed and then their property was taken.

Justice Stephen Breyer suggested that there could be “loads of violations” of international law involving property. “Look what you are opening up,” he told O’Donnell.

Justice Amy Coney Barrett also was skeptical. She told O’Donnell that it was very hard to see how, for example, property taken in the course of enslaving people wouldn’t also fall into this category. Where, she asked O’Donnell, are the limits?

The justices spent virtually no time on the second question that they had agreed to review in the case: whether principles of “international comity” allow a federal court to refrain from resolving the plaintiffs’ claims even if the court has jurisdiction. The justices spent nearly 90 minutes debating that question during a separate argument on Monday in Republic of Hungary v. Simon, which also involves Nazi-era seizure of property from Jews. A decision in both cases is expected next year.