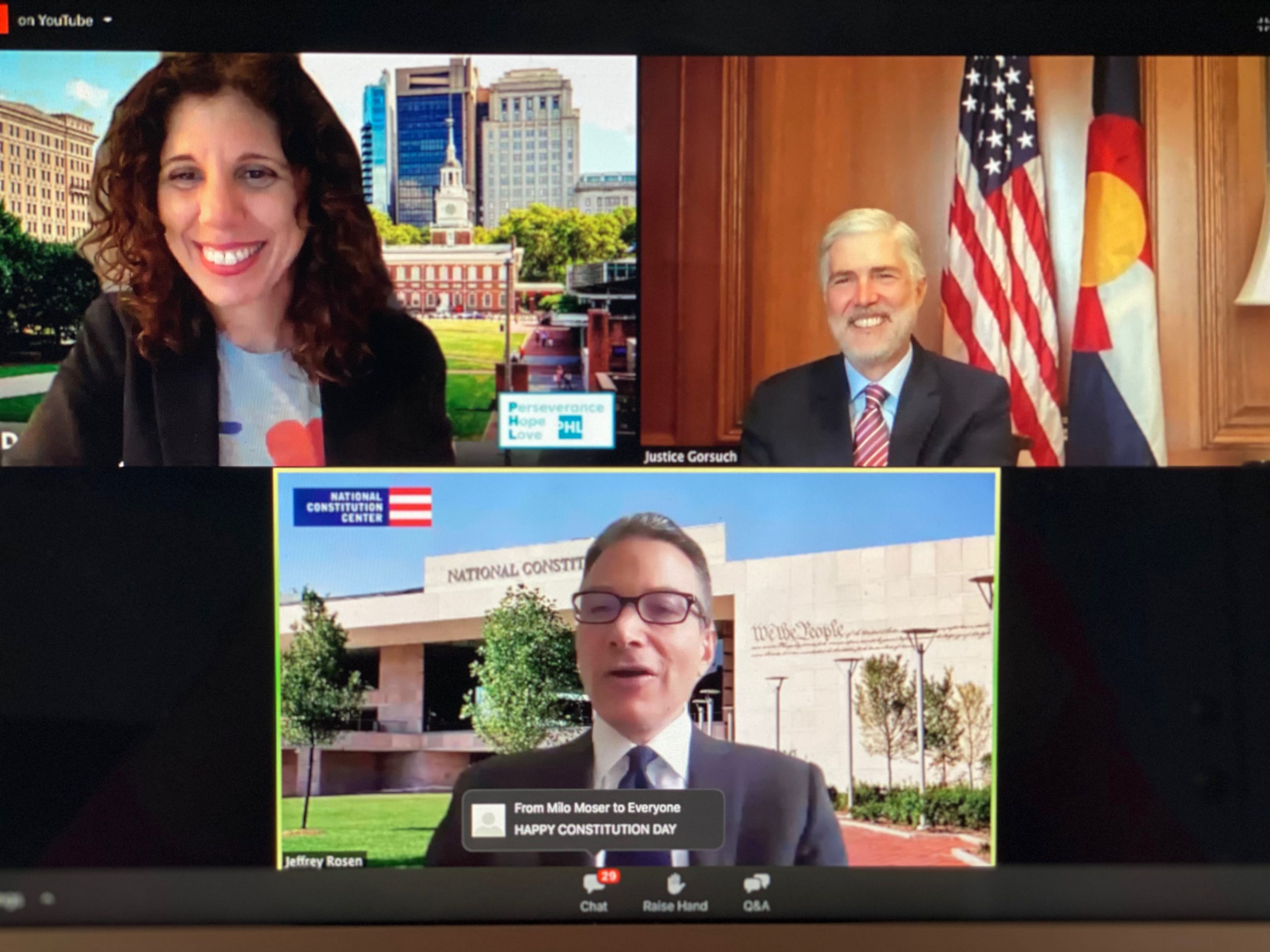 Justice Neil Gorsuch praised Justice Ruth Bader Ginsburg’s four decades of service as a judge, telling schoolchildren across America on Thursday to “think about the sacrifices she’s made on our behalf. We owe her a very great deal.”

Gorsuch’s comments came during a “Virtual Student Town Hall” hosted by the National Constitution Center. The event, streamed by classrooms in schools around the country, was part of a long line of festivities by the center to celebrate Constitution Day. The day’s events will conclude with a musical performance to commemorate Ginsburg’s receipt of the center’s 32nd annual Liberty Medal.

The town hall featured a conversation between Gorsuch and the center’s president, Jeffrey Rosen. They centered their discussion on the significance of the Constitution as a document, whose signing over 200 years ago we celebrate on the 17th of September. Gorsuch shared with students his belief that the Constitution is a “bulwark of human liberty like nothing else in human history.” Its utmost purpose to the Framers, he explained, was to enshrine the “primacy of the individual and our unalienable rights.” Asked whether government should prioritize liberty or order, Gorsuch expressed that a “baseline” of order is needed for rights to exist. “Your rights depend on your recognition of other peoples’ rights as well,” he said.

Honoring Ginsburg was a major theme of the discussion. Gorsuch and Rosen, who clerked together on the U.S. Court of Appeals for the District of Columbia Circuit while Ginsburg was a judge on that court, shared stories of their first interactions with her. As a clerk for Justice Byron White (the only other justice from Colorado and a “role model” to Gorsuch, as well as the justice whom Ginsburg replaced on the court in 1993), Gorsuch recalled being tasked with delivering White’s law clerk manual to Ginsburg when she took office – a manual she returned to him on his first day at the court some 25 years later. For his part, Rosen remembered meeting Ginsburg in an elevator, initially intimidated before he broke the silence by asking her about the opera. Thursday night’s performance, fittingly, will feature many favorite opera singers of Ginsburg, who is a well-known opera fan.

Rosen made sure to weave in plenty of questions from students in the audience.

One student asked what made Gorsuch want to become a judge. “I lived through 9/11 as a lawyer in private practice,” the justice answered. Although he felt he was too old to enlist in the military, Gorsuch still felt called to public service, and he happily accepted an offer to join the Department of Justice before his appointment to the bench, which he described as a happy “accident” and a chance to give back to a country that had been so good to him.

Others asked about the dynamic among the justices. Preferring the term “respectful disagreements”  – “and sometimes even fun” ones – to “arguments,” Gorsuch emphasized the camaraderie on the bench. He highlighted statistics showing that only a fourth to a third of all Supreme Court decisions come down 5-4, a proportion that has remained mostly steady since the 1940s, and he cautioned students not to “lose the forest for the trees” by viewing the court through a partisan lens. The justices’ weekly conference, he stressed, is known for “calm, reasoned discussion.” Gorsuch lamented that, like the conference, students’ experiences at school have largely gone virtual. It “breaks my heart,” he shared, that the learning environment has been so adversely affected for those whom he characterized as least threatened by the coronavirus.

The importance of education and activism for the youngest generation was a touchstone for Gorsuch. In closing, after thanking teachers for their service in the classroom, Gorsuch shared the story of one student, Gregory Watson, whose personal efforts were instrumental in ratifying the 27th Amendment (curbing Congress’ ability to raise its own pay) in the 1990s. Civic education should “empower the American youth to realize that this is their Constitution – it’s not mine,” Gorsuch said. “They’re gonna own it.”