Ginsburg to lie in repose at court on Wednesday, Thursday 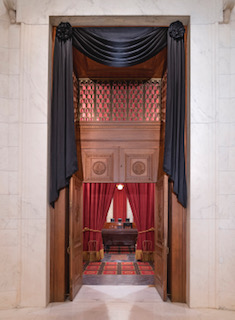 The Courtroom doors draped for the death of Associate Justice Ruth Bader Ginsburg, September 2020. Credit: Photograph by Fred Schilling, Collection of the Supreme Court of the United States.
Share

Justice Ruth Bader Ginsburg will lie in repose at the Supreme Court on Wednesday and Thursday, and she will lie in state at the Capitol on Friday.

Shortly before 9:30 a.m. on Wednesday, a brief public ceremony will occur on the front steps of the court as Ginsburg’s casket arrives, the court said in a news release. Court police officers will serve as pallbearers, carrying the casket as Ginsburg’s former clerks, serving as honorary pallbearers, line the front steps. The casket will be placed inside the Great Hall on the Lincoln Catafalque, which has been loaned by Congress for the occasion. A small private ceremony will be held in the Great Hall at 9:30, attended by Ginsburg’s family and close friends, as well as the other justices. Ginsburg’s portrait, painted by Constance P. Beaty, will be displayed in the Great Hall.

Members of the public will be able to pay their respects at an outdoor viewing from around 11 a.m. to 10 p.m. on Wednesday, and from 9 a.m. to 10 p.m. on Thursday. The casket will lie in repose under the portico atop the front steps of the court.

House Speaker Nancy Pelosi announced that Ginsburg will lie in state at the Capitol on Friday, following the two days of public viewing at the court. The casket will lie inside the Capitol’s Statuary Hall.

In a private interment ceremony, Ginsburg will be laid to rest next week at Arlington National Cemetery.

Posted in Justice Ginsburg dies at 87