Ask the author: Reuters on the consequences of qualified immunity for police officers 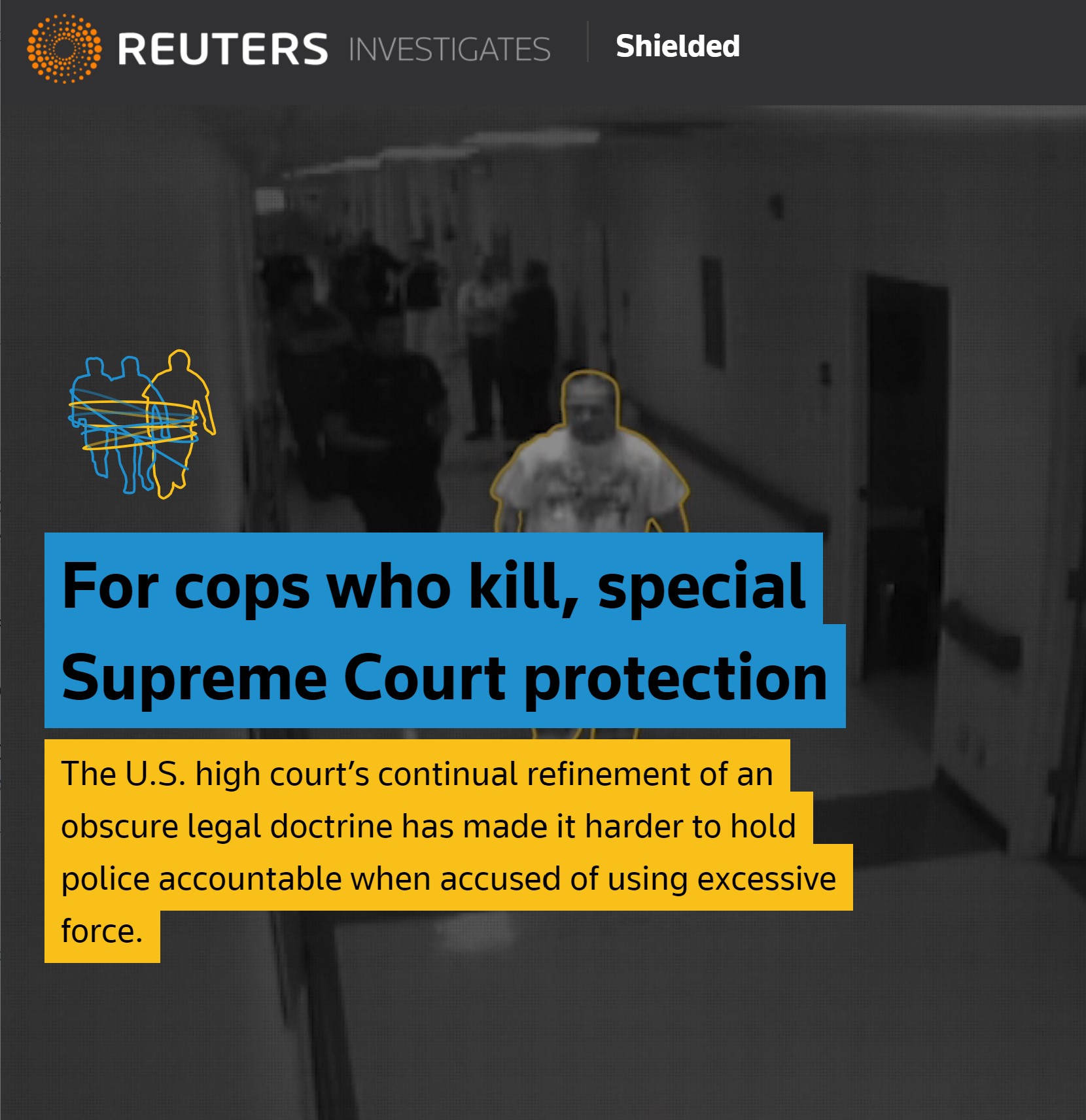 In the United States, police violence frequently dominates the news cycle. People who believe that police officers have subjected them to excessive force can bring civil suits for violation of their Fourth Amendment rights. But these lawsuits often run up against the legal doctrine of “qualified immunity,” which excuses officers from liability for official actions that do not violate clearly established law.

On May 8, Reuters published a special report, “For cops who kill, special Supreme Court protection,” that explains how the Supreme Court’s application of the qualified immunity doctrine has decreased the number of cases in which police officers have been held accountable for using excessive force. Lawrence Hurley, Andrew Chung and Andrea Januta, members of the Reuters reporting team, kindly agreed to answer a few questions about this report. Welcome, Lawrence, Andrew and Andrea, and thank you for doing this.

Question: When did your investigation into qualified immunity begin? Is there anything behind the timing of the release?

Reuters team: When the Supreme Court declined to hear an excessive force case in April 2017, a line in Justice Sonia Sotomayor’s dissent from denial caught our eye. In that case, Salazar-Limon v. Houston, she accused the court of handling appeals brought by plaintiffs less favorably than appeals brought by defendants. Justice Samuel Alito wrote his own opinion questioning Sotomayor’s conclusion, saying she had not shown any data to back it up. We thought it would be interesting if we could get a sense of who was right. With several qualified immunity appeals now pending at the Supreme Court, we worked to get the story out this term so that people better understand what is at stake.

Question: Your report spans multiple pieces and uses various mediums to showcase your data. Could you briefly summarize the key findings of your investigation?

Reuters team: Well, first – we’re not done yet! The story is just the first in a series. In terms of the data findings, there are three key takeaways:

Appeals courts are granting qualified immunity to police much more than they used to. We analyzed hundreds of appeals court rulings in Westlaw’s database from 2005 to 2019 and found a noticeable spike in grants in the last few years, in light of frequent Supreme Court interventions that favor defendants. In the first three years we looked at, appeals courts granted qualified immunity in 44 percent of cases, but by the last three years we looked at, that number had jumped to 57 percent.

We also discovered that the courts have changed how they are navigating the two-part qualified immunity test. We found that since 2009, when the Supreme Court ruled that judges do not have to answer the question of whether there was a constitutional violation but can instead focus solely on the “clearly established” prong, courts are indeed increasingly following that route, which is contributing to the overall increase in the rate at which qualified immunity is granted.

Finally, we answered the question that set us out on this journey: Did the Supreme Court grant more cert petitions brought by defendants? Our work built on what Professor William Baude has written about the court’s “special solicitude” for defendants in qualified immunity cases. We identified 121 cases in which cert was sought in an excessive force case involving claims against police in which qualified immunity was the key issue. Defendants and police file at roughly the same rate but the court is 3.5 times more likely to grant cert in a case filed by defendants. So yes, Sotomayor was right.

Question: As you note, your research showed that of the 121 Supreme Court petitions involving qualified immunity defenses from 2005 to 2018 (excluding pro se litigants), cases appealed by officers were 3.5 times more likely to be granted than were cases appealed by civilians. Did you look at any other factors in the content of the petitions that could explain this disparity?

Reuters team: We did look at other factors, as it was crucial that our analysis accounted for differences in the petitions. We performed a great deal of statistical analysis to study the effects of various circumstances of a case – such as whether plaintiffs were armed or resisted arrest, or which circuit decided the case and when, as examples. Our findings hold up when we control for these factors. We did similar analysis for our appellate court findings, as well. Also, we spent quite a bit of time ensuring that the question presented directly addressed qualified immunity and officer excessive force. We did not include cases that were not directly on point.

Question: Your team analyzed 529 federal circuit court opinions published from 2005 to 2019 in cases in which police officers accused of excessive force raised a qualified immunity defense. Why did you limit your data to published opinions? Do you have a sense of the general trends in the unpublished opinions?

Reuters team: To gather the data we needed to report this project, we used Westlaw extensively, both in terms of the database’s content and its search tools. We limited our data to published opinions for several reasons. First, published opinions set precedent for the circuits and thus carry more weight in shaping the law. Second, many unpublished decisions, in contrast to published ones, have little if any of the legal analysis we needed to properly perform our own analysis, which required a close reading of each opinion. On the other hand, we came across many unpublished opinions in the reporting of the story, including those with dramatic fact patterns or other details that made them indistinguishable from the many published cases we analyzed. We would be surprised if the qualified immunity trends among unpublished opinions did not track those of their published counterparts.

Question: To grant an officer qualified immunity from an excessive force lawsuit, judges apply a two-part test laid out in Saucier v. Katz, in 2001: 1) whether an officer used excessive force in violation of the Fourth Amendment and 2) whether the officer should have known that their actions constituted excessive force based on clearly established court precedent. In 2009, in Pearson v. Callahan, the Supreme Court ruled that lower courts can make a finding on part two of the test without addressing part one. In your report, you address the consequences of this decision:

In the decade since then, the Reuters analysis found, appeals courts have increasingly ignored the question of excessive force. In such cases, when the court declines to establish whether police used excessive force in violation of the Fourth Amendment, it avoids setting a clearly established precedent for future cases, even for the most egregious acts of police violence. In effect, the same conduct can repeatedly go unpunished.

Do you think that the unanimous court in Pearson realized that they were creating this “closed loop”?

Reuters team: It’s not clear what the Pearson court thought the real-world implications would be. But the justices certainly believed that freeing lower courts from the “rigid order of battle” imposed by Saucier just eight years earlier was necessary. As Alito’s reasoning in Pearson makes clear, criticism of Saucier had come from within the court and without. They believed it was costing precious judicial resources, among other problems. And though they explicitly recognized that jettisoning the Saucier framework risked constitutional stagnation, they were willing to take that route. Pearson similarly cannot be viewed in isolation from the court’s repeated reminders that qualified immunity is immunity from suit, not just a defense to liability, and its more recent, active policing of the doctrine, perhaps best explained by Alito’s footnote in the San Francisco v. Sheehan case from 2015, which emphasized qualified immunity’s “importance to society as a whole.”

Question: Sotomayor has called for the court to reconsider its qualified immunity doctrine. In a 2018 dissent in Kisela v. Hughes, Sotomayor said that the court has created an “absolute shield” for police officers accused of excessive force. Do the numbers in your report back up her statement?

Reuters team: The overall uptick in appeals courts granting immunity in the last couple of years appears to show that recent Supreme Court rulings in favor of defendants have had an impact. Although, while it’s certainly harder for plaintiffs to overcome immunity than it used to be, many still do.

Question: In 2017, Justice Clarence Thomas wrote in his concurrence in Ziglar v. Abbasi that “in the decisions following Pierson [v. Ray], we have ‘completely reformulated qualified immunity along principles not at all embodied in the common law.’” Thomas has suggested that the court should find an appropriate case to reconsider the doctrine. Do Thomas and Sotomayor have the same vision for the future of qualified immunity?

Reuters team: The fascinating thing about criticism heaped upon qualified immunity by Thomas and Sotomayor, in many ways ideological opposites, is that it reflects the breadth of a growing number of scholars, lawyers and jurists who also denounce the doctrine. Thomas’ approach is different from Sotomayor’s in that his concern in Ziglar seems to be that the court has gone off the rails of common law in shaping the contours of the defense, while hers is that the court’s current approach to qualified immunity is tantamount to an “absolute shield” that can tell police officers to “shoot first and think later.” Where they end up, however, might indeed be the same, as both might be open to revisiting the doctrine itself, a question that some of the pending cert petitions, like Baxter v. Bracey and Corbitt v. Vickers, present. Other cases might lend an opportunity to refine the doctrine in either direction, such as Kelsay v. Ernst, which is asking specifically about nonthreatening, nonresisting subjects.

Question: Decisions by the Supreme Court have far-reaching consequences that are sometimes hard to quantify. Do you have your eye on another project like this?

Reuters team: As we mentioned above, we’re not done with qualified immunity yet!