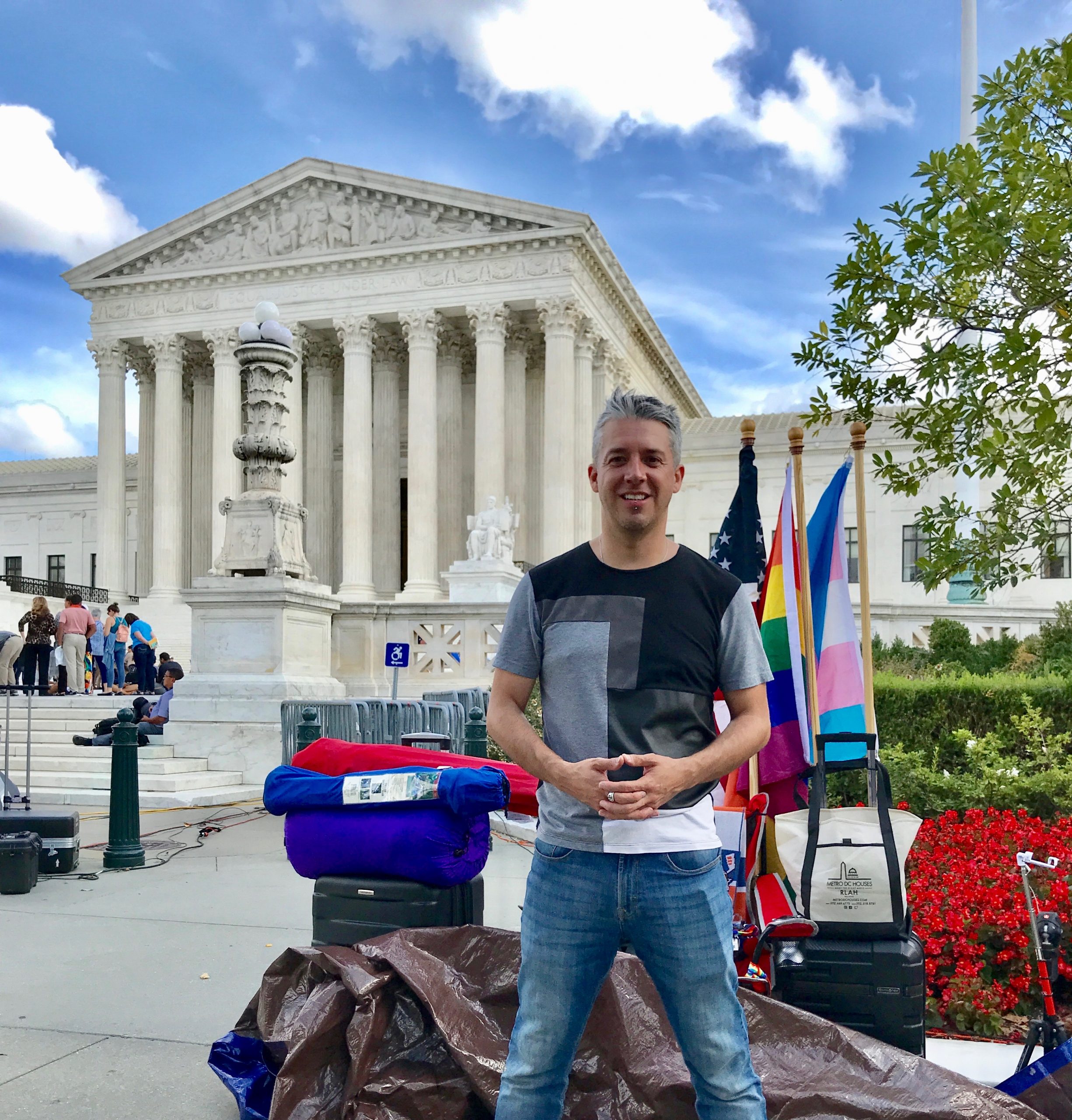 Eddie Reynoso from San Diego, California, has been traveling across the country to witness the justices argue cases concerning the LGBTQ community for years.

Beginning with Hollingsworth v. Perry, a challenge to California’s Proposition 8 defining marriage as between one man and one woman, Eddie and a small group from around the country have made an effort to be present for every major case in the LGBTQ rights space at the court – from Obergefell v. Hodges, in which the justices struck down state bans on same-sex marriage, to Masterpiece Cakeshop v. Colorado Civil Rights Commission, in which they ruled that the commission’s decision compelling a Christian baker to bake a cake for a same-sex wedding was tainted by hostility to religion.

So last year, when the justices scheduled arguments for Tuesday, October 8, in Bostock v. Clayton County, Georgia and Harris Funeral Homes v. Equal Employment Opportunity Commission, which together ask whether Title VII of the Civil Rights Act of 1964 bars workplace discrimination against gay and transgender employees, Eddie committed to return. He booked his accommodations and was set to travel to Washington to meet the others in his cadre, the earliest of whom arrived on October 1.

Then, just before he was about to depart, Eddie was struck by a car in a hit-and-run accident. Though he recovered, his injuries caused him to miss his flight. Dismayed, Eddie posted about his predicament on social media.

The response was swift. Friends and sympathizers rushed to donate, quickly raising enough money for Eddie to purchase a new flight, accommodations and food for the journey out, which he relates totaled nearly $1,500. Still only partially recovered, Eddie rebooked his travel and landed in Washington on Friday, October 4, at 4:30 p.m., still four days before the arguments.

Eddie recalls, “I showed up at the Supreme Court at 9:30 a.m. on Saturday, but I did not set up my campsite until 10:30 p.m. on Saturday night.” Because the cases had received so much attention, and perhaps also because they were the first marquee cases of the 2019 term and the weather was still warm, other people were already clamoring to line up outside the court to secure a spot in line. Eddie and his closest group organized an unofficial campaign to ask everyone not to set up camp until Sunday at 5 a.m., so that everyone could get an extra night’s sleep in a hotel bed.

That plan required one person to spend Saturday night on the sidewalk enforcing the campsite embargo. Eddie volunteered.

“I got hit by a vehicle [in a] pedestrian hit and run. I have a bad back. I’m popping pain medication all night just to be able to sleep on a concrete floor,” Eddie recounts. “It’s probably not the healthiest, and my doctor’s probably going to flip out. But if it’s what I have to do to carry that message home, then it’s what I’m going to do.”

After his solo night outside, Eddie relates, the line swelled quickly on Sunday morning, still two days before the argument. His closest group of three joined him at the head of the line at 5 a.m. By 8 a.m., the line hit 14 people. At 2:00 in the afternoon, a group of 22 paid line-standers arrived, believed to have been hired by the Alliance Defending Freedom, whose attorneys were defending the employer in Tuesday’s second argument. Though the group holding spots declined to answer questions, ADF attorneys were present on the morning of the argument, facilitating the change-over from those paid to hold spots, clad in shorts and T-shirts, to a group in suits and dresses.

All told, Eddie spent three nights outside the court to secure his spot at the front of the line. “I would hope that there’s a better solution so that people don’t have to spend four days and [three] nights out in the elements,” he says. Asked for his take on the current system, Eddie gives a mixed review. “The con is that it prevents an everyday American who doesn’t have the resources to camp out here – or the health.” But “there’s definitely a pro,” Eddie believes, to “limiting the amount of people that can get in. …  It forces people like myself to come out early. That gives us an opportunity to spend, whether it’s one day to four days, educating people on the issues that are being argued.”

That education, in the end, is the reason Eddie makes all the effort to attend arguments in the first place. “It’s important for everyday Americans to take the message that is being argued and relay that back to our communities,” he insists. “When we think of a court case … we forget that those very arguments and the issues that they’re arguing will affect all of us. By being here, I feel like I humanize some of those issues for people back home, and … people that might not agree with me.”