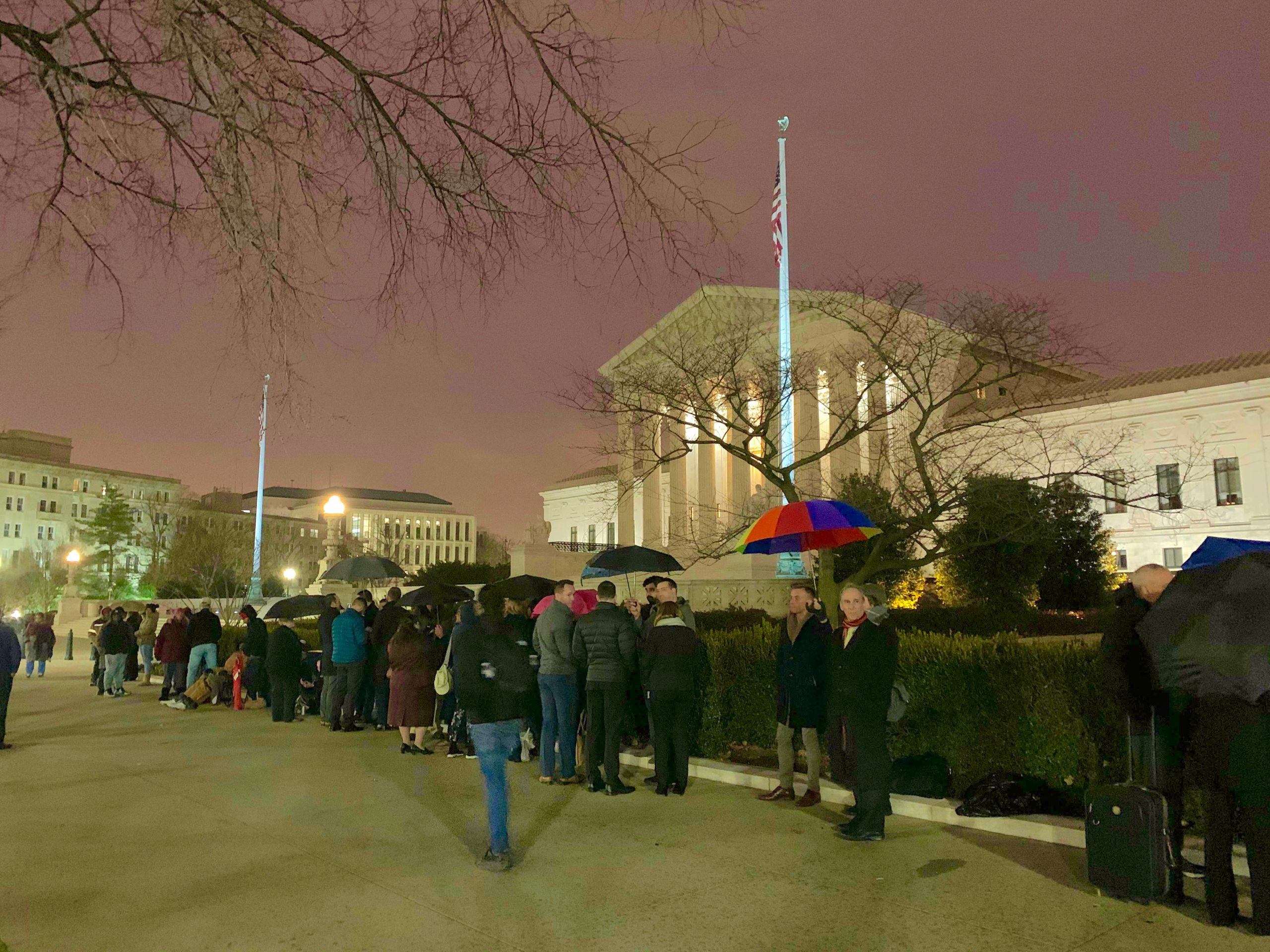 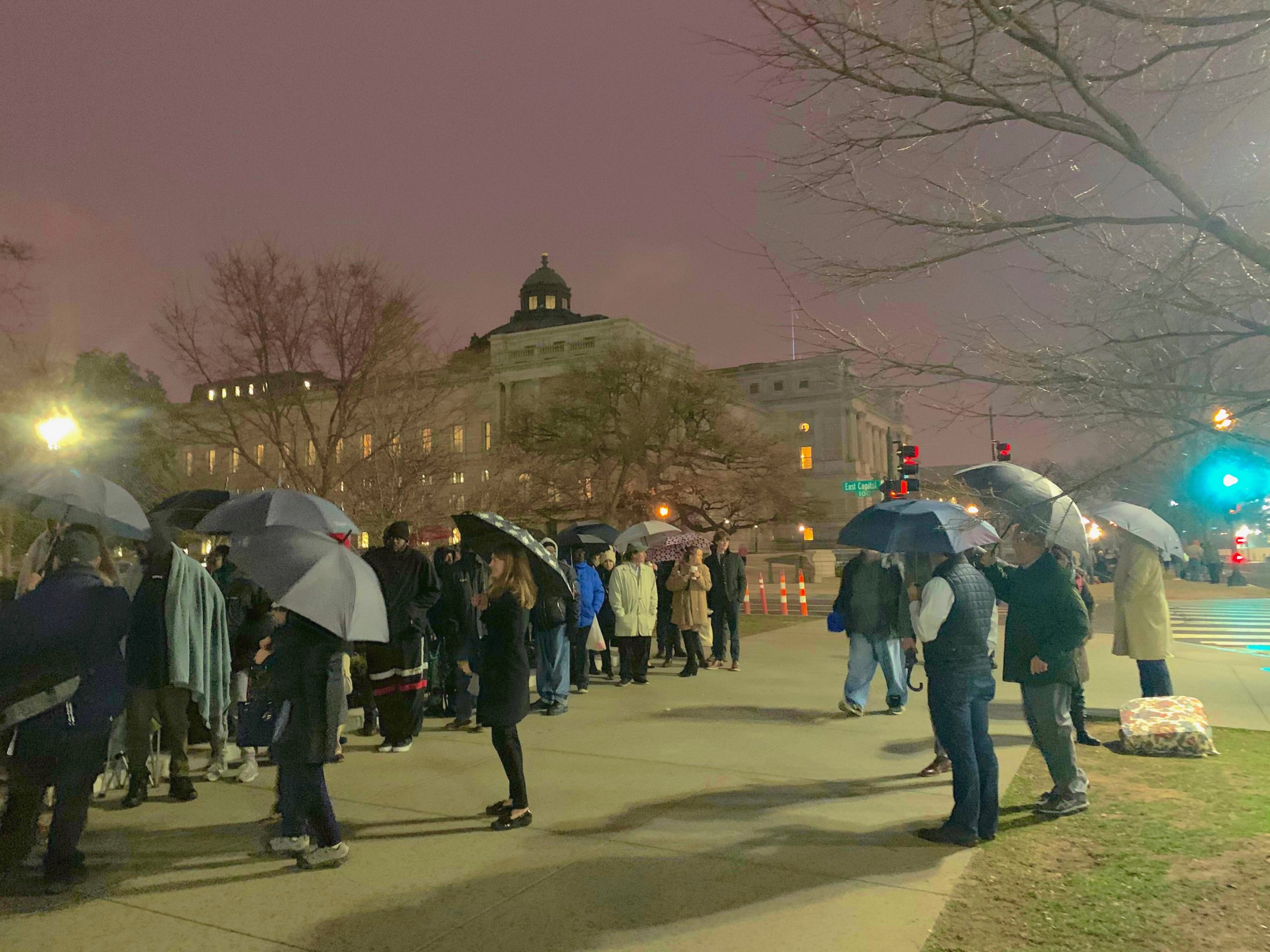 Line-standers swap out with clients in the pre-dawn light on January 14, 2020 (Casey Quinlan)

Preparation and research help when trying to see the Supreme Court in action. Sometimes, though, it also takes a little luck. Emily, a Boston University student from Bethesda, Maryland, discovered this on January 14, 2020, when she attended oral argument with her dad while she was home for winter break.

Lines to get into the court are often shorter in January, because the cold weather deters many would-be attendees from standing outside for hours on First Street NE. But that’s only on days without a big argument. On January 14, the justices were set to hear the case of Bridget Kelly, a former aide to New Jersey Governor Chris Christie who helped orchestrate the “Bridgegate” scandal in 2013.

After researching online to determine when to show up and how popular the cases would be, Emily “concluded 4am would be a good time” and “figured [she and her dad] would be towards the front of the line,” hoping they would be two of the 50 or so people to receive a ticket at 7:30 a.m. guaranteeing admission.

They got in. But what mattered more than her research, it turns out, were two decisions that seemed inconsequential at the time. The first was that Emily “booked a spot in a 24 hour parking garage near the court[,] which came out to $18.” (In hindsight, she would “highly recommend this garage,” which is connected to a hotel at 415 New Jersey Avenue, due to its low cost and proximity to the court.)

The second decision was even more spontaneous. True to their plan, Emily and her dad arrived “right around 4am.” Emily’s dad dropped her off “to save a spot in line” while he parked the car in the garage. “I’m positive if I [hadn’t] gotten out of the car and [instead had gone] to the garage with him,” Emily recalls, “we wouldn’t have gotten tickets. … I was lucky enough to be number 44!” Emily held spot 45 for her dad, and by the time he arrived the line had swelled beyond the 50-person cutoff.

Before getting their tickets, however, Emily and her dad had around three hours to wait. During all that time, they noticed something about the rest of the line: “Among the first 50 people in line[,] spots 1-39 and [46]-50 were just ‘line sitters.’” Line sitters, or “line-standers,” are individuals hired by third-party companies to stand in line outside the court, for hours or even overnight, to hold spots for clients willing to pay a tidy sum so they can swap in just before tickets are handed out. “I knew that paying others to hold a spot in line for you is common at events downtown,” Emily confesses, “but I didn’t realize how big the industry actually is.” The court does not regulate line-standing in the public line. “Many people who had traveled from out of state,” Emily notes, “were disappointed to show up and find that almost all of the spots were being held and there was no chance they were making it inside.”

Emily laments that “the seats allotted for the general public have been completely hijacked by big lobbying firms that make huge profits off of the ‘line sitters’ who [make] a fraction of what the lobbying firms receive.” She recalls the process on January 14 vividly. “Before the tickets are handed out,” Emily says, “hordes of people in suits that can afford to pay up to $600/hour (that’s what one of the ‘brokers’ in line told me) show[ed] up to switch spots.”

But there’s more to the phenomenon than the high price tag. Emily relates that the same broker also confessed “that a majority of [line-standers] are homeless,” including the man holding spots just behind Emily and her dad. He “was telling us he works multiple jobs to support himself,” Emily remembers, and “line sitting is one of them.” The swap-out behind them took on a political dimension when the paying clients arrived sporting Trump Hotel umbrellas. “The craziest thing,” Emily continues, is that “these people behind us with the Trump paraphernalia ended up being Bridget Kelly’s … kids and family.”

After that point, the morning unfolded drama-free, though not without more waiting. Emily recalls that the officers “handed out tickets just after 7am and didn’t let us in until 8ish,” after which “we had an hour and a half to wait around until they lined us up to enter the courtroom at 9:30.” Inside, they killed time by fueling up in the cafeteria and browsing the portraits of former justices lining the hallways. During the argument, Emily and her dad enjoyed their view from the public gallery in the back of the courtroom, “which in [her] opinion was the best seat in the house because we got a full wide view of everything going on and all the Justices.” “The coolest part,” Emily says, “was when we had to rise and got to see all the Justices enter the courtroom!”

Despite all that transpired during the morning, when asked whether she would try to attend another argument, Emily was certain: “Definitely!”