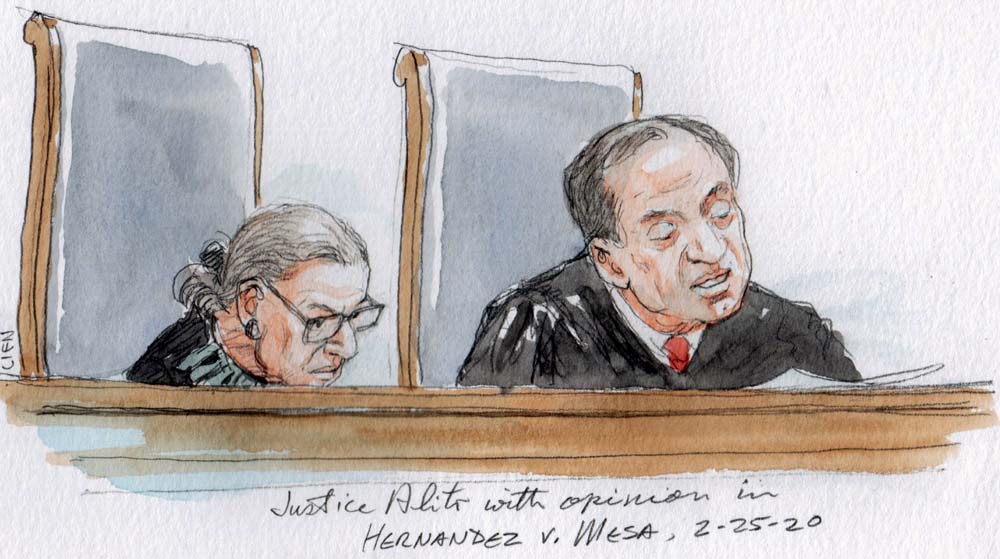 It has been 10 years since 15-year-old Sergio Hernandez was shot and killed by a U.S. Border Patrol agent, Jesus Mesa, while Hernandez was playing on the Mexican side of the border. The Hernandez family filed a lawsuit in federal court, seeking to hold Mesa responsible for their son’s death, but today the Supreme Court, by a vote of 5-4, ruled that the lawsuit cannot go forward.

The Hernandez family’s lawsuit contended that Mesa had used excessive force against Sergio, which violated the boy’s rights under the Fourth and Fifth Amendments to the Constitution. The family pointed to a 1971 case, Bivens v. Six Unknown Named Agents, in which the Supreme Court allowed a lawsuit seeking money damages from federal officials for violating the Constitution to go forward. But in 2017, after hearing oral argument in the family’s case for the first time, the Supreme Court sent the case back to the lower courts for them to reconsider in light of the Supreme Court’s decision in Ziglar v. Abbasi, holding that a Bivens remedy should not be extended to a “new context” when there are “special factors counseling hesitation” and Congress has not affirmatively authorized a suit for damages. When the case went back to the U.S. Court of Appeals for the 5th Circuit, the court concluded that the Hernandez family cannot rely on Bivens to bring their claims against Mesa. The Supreme Court upheld that ruling today.

In a decision by Justice Samuel Alito that was joined by Chief Justice John Roberts and Justices Clarence Thomas, Neil Gorsuch and Brett Kavanaugh, the court acknowledged that the case is a “tragic” one, but it ultimately concluded that Congress, rather than the courts, should decide whether to allow plaintiffs to seek money damages from a federal official. Alito began by noting that in the nearly 50 years since the decision in Bivens, the Supreme Court has only extended Bivens twice. Not only is the extension of Bivens “a disfavored judicial activity,” Alito stressed, but the justices “have gone so far as to observe that if the Court’s three Bivens cases [had] been … decided today, it is doubtful that we would have reached the same result.”

The court first determined that the Hernandez family’s Bivens claims “assuredly arise in a new context.” Bivens itself involved “an allegedly unconstitutional arrest and search carried out in New York City,” while Davis v. Passman, one of the decisions extending Bivens, involved “alleged sex discrimination on Capitol Hill.” “There is a world of difference between those claims” and the family’s “cross-border shooting claims,” the court emphasized, “where the risk of disruptive intrusion by the Judiciary into the functioning of other branches is significant.”

Turning to the second step of the test, the court found “multiple, related factors that raise warning flags.” The Hernandez family’s case implicates foreign relations, the court reasoned, because of the “legitimate and important interests” of both the United States and Mexico “that may be affected by the way in which this matter is handled.” “It is not our task,” the court said, “to arbitrate between them.” The case also implicates the “conduct of agents positioned at the border,” which has a “clear and strong connection to national security,” the court explained: Thousands of people cross the U.S.-Mexico border at ports of entry every day, and hundreds of thousands of people are caught every year attempting to cross the border illegally. “In sum,” the court wrote, “this case features multiple factors that counsel hesitation about extending Bivens, but they can all be condensed to one concern—respect for the separation of powers” between Congress and the courts.

Thomas wrote a concurring opinion that was joined by Gorsuch. Although he agreed that the Hernandez family’s lawsuit should not be allowed to go forward, he would have gone even further. In “my view,” Thomas argued, “the time has come to consider discarding the Bivens doctrine altogether.” Over the years, he explained, the court has “cabined the doctrine’s scope, undermined its foundation, and limited its precedential value. It is time to correct this Court’s error and abandon the doctrine altogether.”

Justice Ruth Bader Ginsburg dissented, in an opinion joined by Justices Stephen Breyer, Sonia Sotomayor and Elena Kagan. Ginsburg would have allowed the lawsuit to go forward: “Rogue U.S. officer conduct,” she argued, “falls within a familiar, not a ‘new,’ Bivens setting. Even if the setting could be characterized as ‘new,’ plaintiffs lack recourse to alternative remedies, and no ‘special factors’ counsel against a Bivens remedy.” Ginsburg also lamented that Hernandez’s death “is not an isolated incident” and warned that “it is all too apparent that to redress injuries like the one suffered here, it is Bivens or nothing.” “I resist the conclusion,” she wrote in closing, “that nothing is the answer required in this case.”