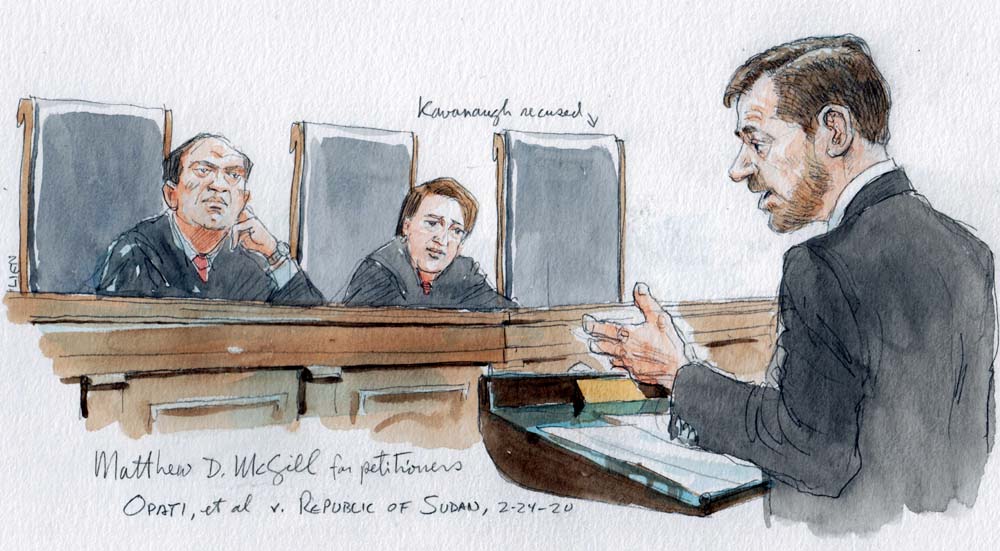 The Supreme Court heard oral argument this morning in a case brought by the victims of the August 1998 bombings of the U.S. embassies in Tanzania and Kenya. Although the bombings killed over 200 people and injured more than a thousand others, today’s discussion before the eight justices – Justice Brett Kavanaugh was recused – was almost entirely a technical one. The victims and their family members are seeking to hold Sudan responsible for its support of al Qaeda, which carried out the bombings, but a federal appeals court in Washington, D.C., ruled that the plaintiffs cannot recover punitive damages because Congress did not authorize such damages until 2008, 10 years after the bombings. After 60 minutes of debate this morning, it seemed possible, although not at all certain, that the plaintiffs might have at least five votes to reverse that decision.

The Foreign Sovereign Immunities Act, which governs the immunity of foreign countries to suit in the United States, carves out several exceptions to the general rule that foreign countries cannot be sued in U.S. courts. In 1996, Congress first enacted a “terrorism exception” to the FSIA, which allows a foreign country that has been identified as a “state sponsor” of terrorism to be sued in U.S. courts for (among other things) providing significant support for terrorists.

Twelve years later, in 2008, Congress amended the FSIA to provide that victims of terrorism have a right to sue a state sponsor of terrorism in federal court under the FSIA and to seek punitive damages, which the FSIA otherwise bars. The 2008 amendments also specified how the changes would apply to lawsuits based on events that occurred before 2008. One subsection of that provision, Section 1083(c)(2), allows plaintiffs to convert or refile under the new terrorism exception cases that had previously lacked a cause of action; the second subsection, Section 1083(c)(3), allows plaintiffs to bring lawsuits that are “related” to lawsuits that have already been filed under the terrorism exception.

Much of today’s oral argument focused on whether Congress made clear that it wanted punitive damages to be available in lawsuits based on conduct that took place before the 2008 amendments were enacted. Arguing for the victims and their family members, lawyer Matthew McGill emphasized that Sudan had “ample opportunity to conform its primary conduct to U.S. law” but opted not to. He explained that the rationale underlying the general presumption that laws do not apply retroactively, outlined in Landgraf v. USI Film Products, should not apply at all to foreign countries, because foreign countries “generally are not guided in their policymaking by changes to U.S. law.” But even if the presumption did apply, McGill continued, it is “abundantly clear” that Congress wanted punitive damages to be available in “two carefully defined categories of cases involving past acts of terrorism,” as it outlined in Sections 1083(c)(2) and 1083(c)(3).

Justice Samuel Alito was not necessarily convinced. What, Alito asked, “would be wrong with saying if Congress wants to make punitive damages retroactive it has to say so expressly?”

Justice Ruth Bader Ginsburg had a different concern. Is Sudan wrong, she queried, when it tells us that the Supreme Court has never allowed punitive damages to be applied retroactively?

Arguing for the federal government as a “friend of the court” supporting the victims and family members, Assistant to the Solicitor General Erica Ross acknowledged that the court’s decision in Landgraf would apply to this case, but she pushed back against Alito’s suggestion that Landgraf requires Congress to use “magic words” before a law can apply retroactively. When it enacted the 2008 amendments, Ross told the justices, Congress was “exceptionally clear” that it wanted punitive damages to apply retroactively.

“We’re taking a more practical approach,” Curran told the justices, with a “straightforward application” of Landgraf. But Ginsburg did not necessarily seem persuaded that Landgraf would come into play at all. “There’s something strange,” she told Curran, “about the whole discussion,” because the retroactivity doctrine is based on the idea of making sure that an individual or entity has notice. Are you saying, Ginsburg asked, that Sudan might have done something different if it had been aware that punitive damages could be levied against it?

Curran seemed to suggest that the answer was yes. Sudan might have supervised its 40 million residents more closely, he responded.