Academic highlight: The “Odd Party Out” theory of certiorari 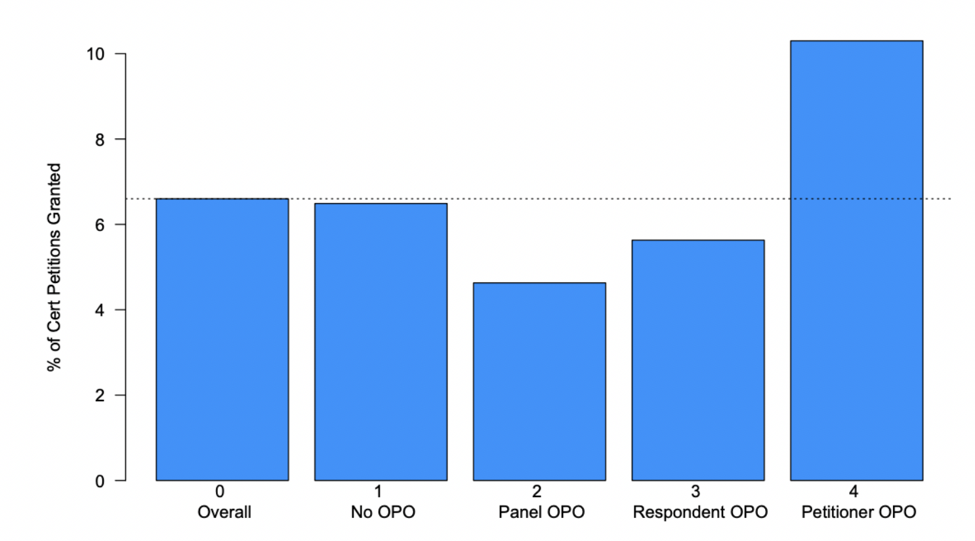 Each year, the Supreme Court justices and their clerks pore over thousands of certiorari petitions, but they only grant about 70 of those petitions for oral argument. Not only do the petitions that are granted go on to shape national discourse, but they also address some of the country’s most pressing legal and partisan controversies. This makes understanding what drives the decisions about which cert petitions to grant a subject of frequent debate among advocates and academics.

So what does explain which petitions are granted? Some scholars argue that the court operates as a kind of “principal” overseeing its many “agents” (the lower courts). When lower courts go too far afield, these scholars argue, the Supreme Court steps in to gently (or not so gently) “correct” the lower courts. Other scholars argue that the court uses the cert process as a way to identify and explore cases that are of high legal importance—that is, the justices want to devote their energy to cases that they think will influence jurisprudential development.

An important subtext to these arguments is the significance of ideology. For the court observers who believe that the court is primarily interested in “correcting errors,” ideology is an important proxy for what constitutes an error. Quantitative research has shown, for example, that the court is more likely to grant cert in cases decided by a federal appeals court that is ideologically distant from the Supreme Court itself—suggesting that the justices more closely monitor lower courts that are either much more liberal or much more conservative than the Supreme Court. And, for the court observers who believe that jurisprudential development is driving cert decisions, ideology also matters: Some of the most important cases heard by the court are cases in which the political parties are in conflict.

It helps to think about the Odd Party Out through an example. Suppose a case is being litigated between two conservative parties, and that the case is being decided by a fairly liberal appeals court panel—perhaps a particular panel in the U.S. Court of Appeals for the 9th Circuit. In this case, the panel is the Odd Party Out. Without more information, it would be reasonable to think that it is unlikely that cert will be granted. Because even though a liberal panel may be biased against conservative litigants, it is not obvious that this matters when both parties share the same ideology.

Finally, suppose the liberal panel rules in favor of the liberal party and against the conservative party, and it is the conservative party that is petitioning for cert. In this case, the petitioner is the Odd Party Out. (i.e., the petitioner is conservative, but the panel and respondent are both liberal). Here, it seems much more likely cert will be granted. Although the ruling may be totally legitimate and well-grounded in the law, an external observer might also see a risk of ideological bias: After all, liberal panels are naturally inclined toward liberal causes.

The three scenarios illustrate the core intuition of the Odd Party Out theory. In the working paper we just released, we test this theory using one of the largest data sets on Supreme Court cert petitions yet assembled by academic researchers. These data include all cert petitions from federal courts of appeals filed from 2003 to 2015. To determine ideology, we matched the lawyers and lower court judges to measures of ideology from the largest database of political contributions, the Database on Ideology, Money in Politics, and Elections. (In the paper, we show that lawyers’ ideologies are a good proxy for the ideologies of the parties that they represent at the Supreme Court.)

Our analyses show very strong support for the Odd Party Out theory. In the universe of cases for which we have complete ideology data, as the above figure shows, the Supreme Court granted roughly 6.6 percent of cert petitions from appeals courts for either oral argument or as a GVR (Grant, Vacate or Remand order). As expected, the probability of cert is lower when the panel or respondent is the Odd Party Out. But, importantly, this baseline grant rate was roughly 3.7 percentage points higher when the petitioner was an Odd Party Out, which we can see in the column to the right. Given the low probability of cert petitions’ being granted, this translates into roughly a 56 percent increase in the probability that a cert petition was successful.

So, is whether the petitioner is an Odd Party Out the only thing that matters for predicting cert? Of course not. The standard set of considerations that Supreme Court-watchers expect will matter are obviously important. These include the presence of circuit splits, the decision by the lower-court panel to hear the case en banc, whether a circuit court judge wrote a dissent and whether the solicitor general filed the petition. However, the presence of an Odd Party Out is another case characteristic that provides information to the justices, and is thus another factor for court-watchers to keep an eye out for. And, as our country becomes more polarized, we suspect that the Odd Party Out theory will become even more predictive of cert decisions.