Argument analysis: The court once again considers the relevance of historic trust law in an employee-benefits case 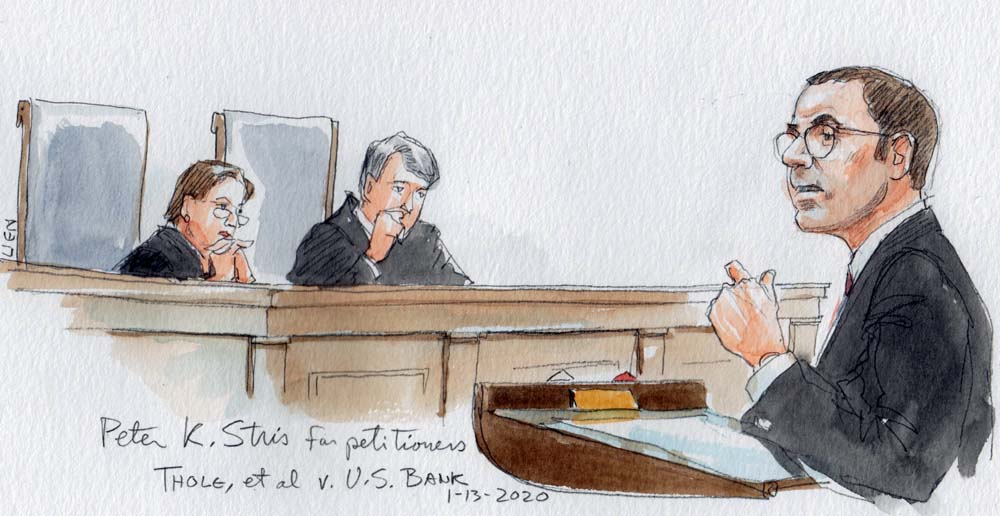 The justices’ questions in yesterday’s argument in Thole v. U.S. Bank addressed 15th-century trust law, the risk of being hit by a meteorite and practical concerns with being able to identify the risk of loss of pension benefits. At issue is whether participants and beneficiaries in fully funded defined-benefit plans have standing to sue plan fiduciaries for alleged breaches of their statutory fiduciary duties under the Employee Retirement Security Act.

James Thole and Sherry Smith are retired from U.S. Bank and have received all of the benefits promised to them under its defined-benefit pension plan. Defined-benefit plans promise a set lifetime benefit to participants and beneficiaries. Thole and Smith alleged in their ERISA lawsuit that investment decisions made by the plan fiduciaries in breach of their duties of loyalty and prudence caused the plan to lose more than $758 million. The district court held that Thole and Smith had standing under Article III of the Constitution because the plan’s underfunded status put it at increased risk of default, but dismissed their claims for breach of the duty of loyalty as being outside the statute of limitations. It allowed their prudence claims to move forward. After the plan sponsor fully funded the plan, the U.S. Court of Appeals for the 8th Circuit held that ERISA’s remedial provisions did not provide a basis for the claims because neither Thole nor Smith’s benefits had been reduced. The Supreme Court granted certiorari to address a circuit split on the issue.

Chief Justice John Roberts, who appeared skeptical that standing exists, asked Stris whether his arguments relied on a forward-looking or a retrospective theory of injury. Stris responded that Thole and Smith had suffered a variety of injuries, and that since the 15th century, trust beneficiaries have had present property rights to prevent current damage to trust assets so long as they possibly could benefit from the assets. The chief justice seemed disinclined to look beyond the likelihood that Thole and Smith would receive their full benefits from the plan.

In contrast, Justice Stephen Breyer, after triggering laughter in response to his comment that he doesn’t remember the 15th century, acknowledged that historically, trust beneficiaries had the ability to bring suits alleging fiduciary breach even in situations when the trust benefited from self-interested fiduciary acts. He questioned, though, whether Thole and Smith had standing to pursue their claims of a prudence violation. In response, Stris pointed to English Chancery Court decisions dating to the early 1800s that permitted beneficiaries with contingent interests to bring prudence claims. The debate then turned to the technical question of whether participants and beneficiaries in ERISA plans are more like remaindermen in traditional trusts or contingent beneficiaries.

At that point Justice Samuel Alito, after saying “you have some strong arguments,” fast-forwarded the discussion to the 21st century and whether Thole and Smith are at an imminent risk of harm. He questioned whether the risk of Thole and Smith’s not receiving their full benefits is greater than the risk of being hit by a meteorite. Stris responded that defined-benefit plan funding levels are market-based financial investments. Congress gave participants and beneficiaries an interest in benefit plans’ undivided and unsegregated trust assets to avoid the need for case-by-case assessments of the risk that benefits would not be paid.

Next up was Assistant to the Solicitor General Sopan Joshi, who appeared as amicus curiae on behalf of Thole and Smith. He began by arguing that under traditional trust law, “even discretionary beneficiaries could sue a trustee for breach of trust.” Justice Neil Gorsuch was concerned that this principle would mean that every beneficiary in a defined-contribution plan (a plan in which participants and beneficiaries are entitled only to the assets in their individual accounts) with surplus assets would have standing to sue even if their own account assets had never been affected by a fiduciary breach.

At that point, Justice Brett Kavanaugh, who had previewed his concerns in questions to Stris, indicated that he was torn between historical trust law, which he thought supported standing, and the near total lack of risk that Thole and Smith will not receive all the benefits promised to them. The dueling concerns caused Kavanaugh to see this as “a close case.” He pressed Joshi on whether the Pension Benefit Guaranty Corporation’s guarantee of defined-benefit plan benefits should be a consideration in determining whether sufficient risk of harm exists.

The practical aspects of Kavanaugh’s qualms became clear after Joseph Palmore began his argument on behalf of U.S. Bank. Kavanaugh asked Palmore about where to draw the line between sufficient and insufficient increased risk if the court holds that ERISA plan participants and beneficiaries must plead that an alleged fiduciary breach caused an increased risk that they would lose benefits. Initially Palmore advocated the standard developed by the U.S. Court of Appeals for the 5th Circuit, which would require both that the plan be underfunded and that the employer “was unwilling or unable” to fund the plan. Kavanaugh clearly was uncomfortable with a standard that would be difficult for the lower courts to apply, asking, “[I]f we don’t have clarity on the line, is it worth the candle of trying to draw a line rather than just going with the historical approach advocated by the other side?” Later, Kavanaugh returned to the question of whether the PBGC’s guarantee should make any difference to the risk analysis. Palmore responded that the guarantee does matter and conceded that the logical implication of that view is that any participant or beneficiary whose benefits are fully protected by the PBGC never would have standing under Article III to bring a claim for alleged fiduciary breach regarding the investment of plan assets.

Justices Ruth Bader Ginsburg, Sonia Sotomayor and Elena Kagan all seemed to lean in favor of finding standing. In her questioning of Stris, Ginsburg concentrated on identifying the nature of the fiduciary’s actions and whether the claims for both loyalty and prudence violations survived the 8th Circuit’s decision. In response to Palmore’s argument that even if participants and beneficiaries cannot bring claims for fiduciary breach, the Department of Labor and co-fiduciaries may bring claims, Ginsburg observed that the DOL itself indicated that the agency does not have the resources to pursue all potential violations of fiduciary duty. Sotomayor seemed to find the historical argument compelling, stating that “trust law has been clear forever” that plan participants can sue fiduciaries for self-dealing. In an extended dialogue with Palmore, Kagan appeared skeptical of his assertion that the plan, rather than the participants and beneficiaries, has the equitable interest in the plan.