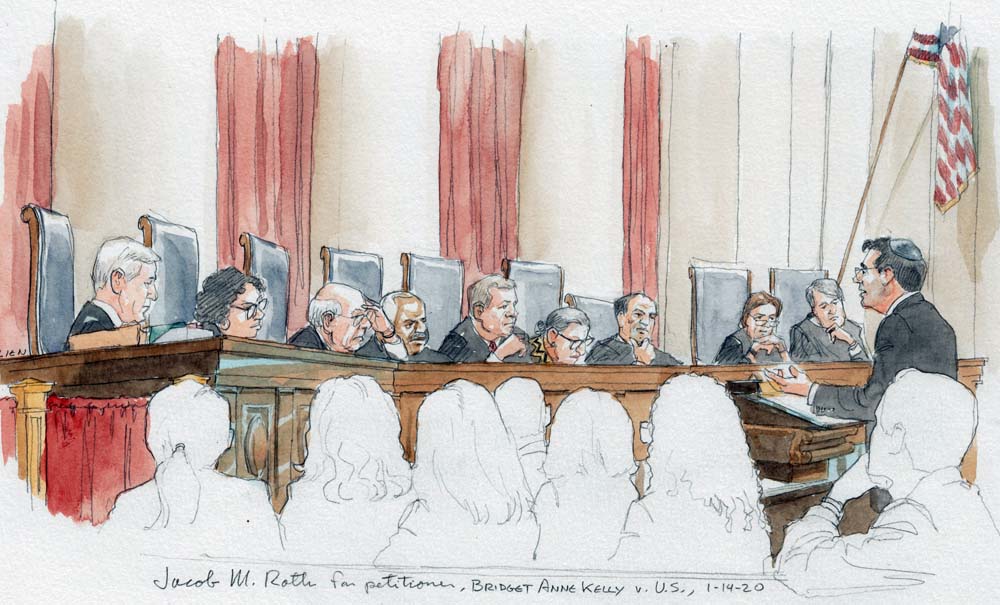 It has been nearly six and a half years since allies of Chris Christie, then the governor of New Jersey, created gridlock on the streets of Fort Lee by eliminating two of the three lanes on the George Washington Bridge reserved for drivers accessing the bridge from the New Jersey city. William Baroni, whom Christie had named as a senior official to the Port Authority of New York and New Jersey, which operates the bridge, and Bridget Kelly, Christie’s deputy chief of staff, planned the incident along with David Wildstein, an aide to Baroni, to punish the Democratic mayor of Fort Lee for his failure to endorse Christie during Christie’s 2013 reelection campaign. To explain the changes to the traffic pattern, Baroni, Kelly and Wildstein concocted a fictitious traffic study, but the regular lanes were restored three days later, when the executive director of the Port Authority learned about the changes. Wildstein pleaded guilty to conspiracy charges, and Baroni and Kelly were found guilty of violating federal property-fraud laws. Baroni and Kelly were at the Supreme Court today, asking the justices to throw out those convictions. During an hour of oral argument this morning, the justices had tough questions for both sides and appeared divided – although not necessarily on ideological lines.

Arguing on behalf of Bridget Kelly, lawyer Jacob Roth cautioned the justices that if the convictions are allowed to stand, they will have a “chilling effect” on “honest public servants” and will run the risk of “criminalizing ulterior motives” even when public officials don’t receive payments or kickbacks. Many of the questions for Roth came as the justices struggled to understand how, under Kelly’s theory, prosecutors would draw a line between this case and cases in which the property-fraud statute would apply, such as the case of a public official directing a government employee to paint the official’s house or use a municipal snowplow to plow the official’s driveway. Roth stressed that the property-fraud statute makes it a crime to implement a fraudulent “scheme to obtain property,” but the decision to realign the lanes was a regulatory decision. So even if Kelly and Baroni lied about the decision, Roth concluded, they weren’t lying to obtain property.

Some of the justices appeared unconvinced. Chief Justice John Roberts suggested to Roth that the line he was proposing could be a hard one to draw, while some of Roberts’ colleagues were more skeptical in their questioning. Justice Samuel Alito was perhaps the toughest interrogator during Roth’s time at the lectern. Alito focused on the extra money – for overtime for toll collectors and for the engineers to conduct the fake traffic study – that the scheme to realign the lanes had cost the Port Authority. If money is property and money was lost, Alito asked, why doesn’t that fit within the language of the property-fraud statute? And when Roth emphasized that the point of the defendants’ scheme was to influence the decision about the alignment of the lanes, Alito pushed back. “I thought,” Alito said dryly, “that the scheme was to make life difficult for Fort Lee.”

Justice Sonia Sotomayor also seemed unsympathetic to Roth’s argument. I can’t see a headline, she told Roth, that says that it is “OK for government officials to use government money in a way that is unauthorized, for private ends.”

Justice Ruth Bader Ginsburg was also not entirely receptive. When Roth dismissed the costs of the employees’ time as “incidental” and not the “object” of the defendants’ scheme, Ginsburg countered that the employees’ time was “essential to the scheme” – presumably meaning that, without it, the realignment of the lanes and the traffic study that supposedly justified the realignment would not have occurred.

In his last few minutes at the lectern, Roth acknowledged that no one wants government officials who act for personal or partisan reasons. Indeed, he pointed out, New Jersey has a law that could address this scenario. But the federal property-fraud law, he made clear, is not the remedy. If the facts in this case resemble those covered by any federal laws, he observed, it would be the federal laws that bar schemes to deprive someone of the right to “honest services” – but the Supreme Court has ruled that the “honest services” laws only apply in cases of bribes or kickbacks. 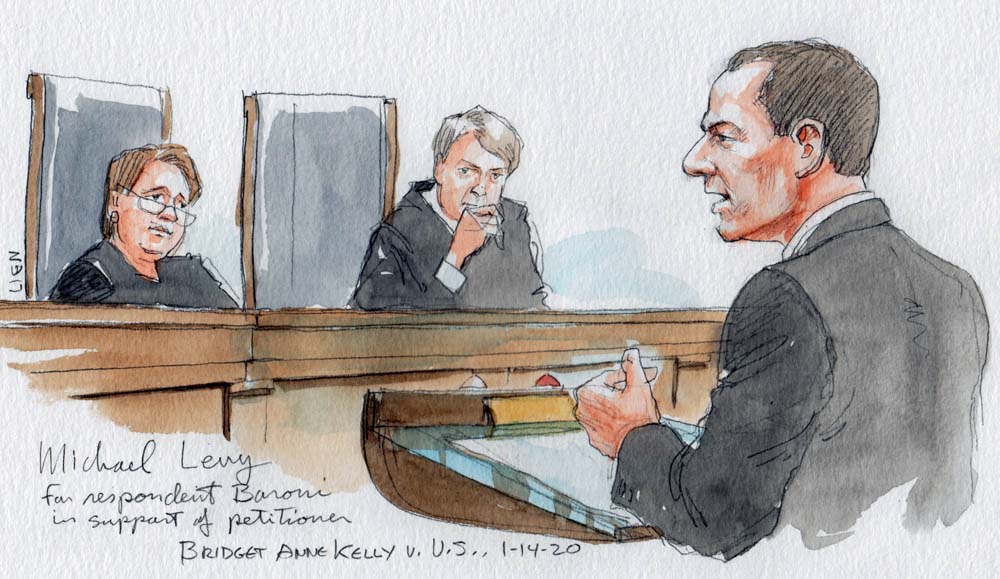 Michael Levy for Baroni in support of petitioner (Art Lien)

Arguing for Baroni, lawyer Michael Levy told the justices that a public official does not commit fraud when he lies about his motives for a decision if he had the authority to make the decision in the first place. Much of Levy’s 10 minutes at the lectern was then spent debating whether Baroni did in fact have the authority to order the lane change. Sotomayor wondered aloud why the defendants would have had to make up the traffic study if Baroni had the power to realign the lanes anyway. Doesn’t the fact that Wildstein had to lie to Port Authority employees about the executive director’s knowing about the scheme, she queried, show that Baroni didn’t have the authority? 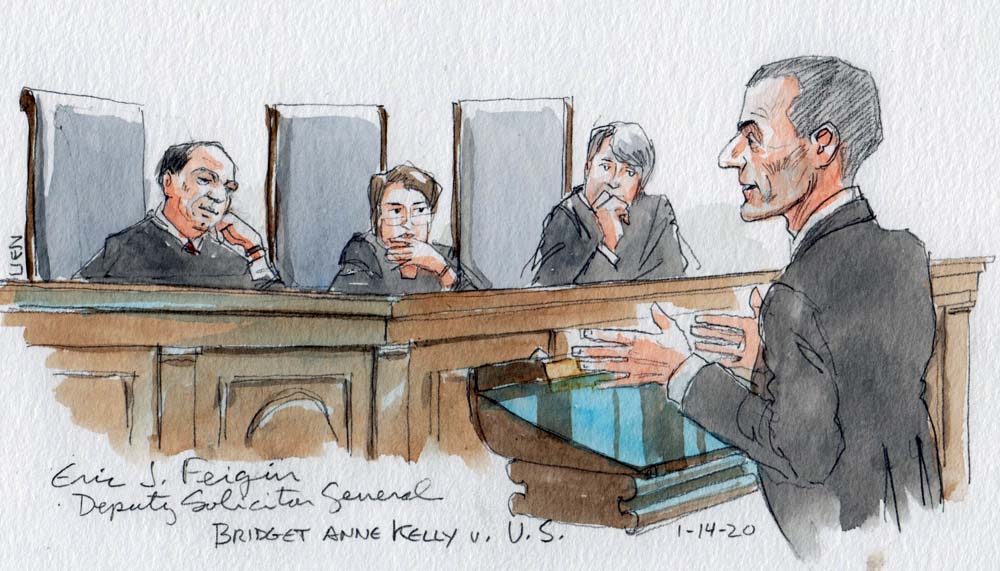 Arguing on behalf of the United States, Deputy Solicitor General Eric Feigin told the justices that Kelly and Baroni committed fraud when they told a lie to take control of the lanes on the bridge. Without a lie, he stressed, they could not have realigned the lanes.

In Justice Stephen Breyer’s view, however, accepting the government’s argument would mean criminalizing precisely the kind of conduct that the Supreme Court had said could not be criminalized under the “honest services” statute. If you don’t have the authority to take something, Breyer said, but you put what you take to public use, how is “honest services” fraud not back in the statute? There is nothing in the government that doesn’t require someone to spend money – whether in the form of employee time or office paper – to achieve a purpose.

Feigin tried to distinguish this case, telling Breyer and the other justices that Baroni and Kelly’s conduct amounted to “commandeering fraud,” which occurs when the perpetrator takes over the property in the victim’s hand and manages it as if the property were the perpetrator’s own. But Roberts saw things differently. He countered that although a public official doesn’t have the authority to direct a government employee to plow the official’s driveway, an official can have the power to say how the traffic lanes are used. The lanes are still being used for a public purpose, Roberts noted, because people are still driving on them.

Alito grilled Feigin for several minutes about the government’s contention that Baroni was guilty of fraud because he lacked the power to order the lane realignment. You say that the jury found that Baroni was not authorized, Alito said, but “I see no reason to believe the jury made any such finding.” “I’ve never seen a criminal case,” Alito continued, “where we’re asked to defer to a jury’s finding that the jury didn’t find.” And Alito posited that Baroni could have had the authority to order the lane realignment but still lied about his motives because the real reason would not have been well-received. To illustrate this theory, Alito observed that if an employer hired his brother-in-law, describing him as the best-qualified candidate, but the real reason for the hire was that the employer’s wife wanted her husband to hire her brother, “does that mean he doesn’t have authority?”

By the end of the hour, it was not at all clear how the justices are likely to decide this case, particularly because Justice Brett Kavanaugh asked only one question and two justices – Justices Neil Gorsuch and Clarence Thomas – did not ask any at all. And some of the justices who did speak up – such as Kagan and Roberts – had tough questions for both sides. But the court’s recent concerns about what many justices see as prosecutors’ overly expansive interpretation of federal fraud and corruption laws, as well as qualms about the government’s position that Baroni didn’t have the power to order the lane realignment, could bode well for Kelly and Baroni. A decision is expected by summer.