This morning the Supreme Court heard oral argument in a challenge to the constitutionality of a New York City rule that barred gun owners from taking their licensed guns outside the city. The gun owners argued that the rule violated their right to “keep and bear arms” under the Constitution’s Second Amendment. But it’s not clear that the justices will reach the merits of the gun owners’ complaint. Instead, it seemed possible (although far from certain) that they could throw out the case because the dispute is now moot – that is, no longer a live controversy – after the city repealed the rule last summer. 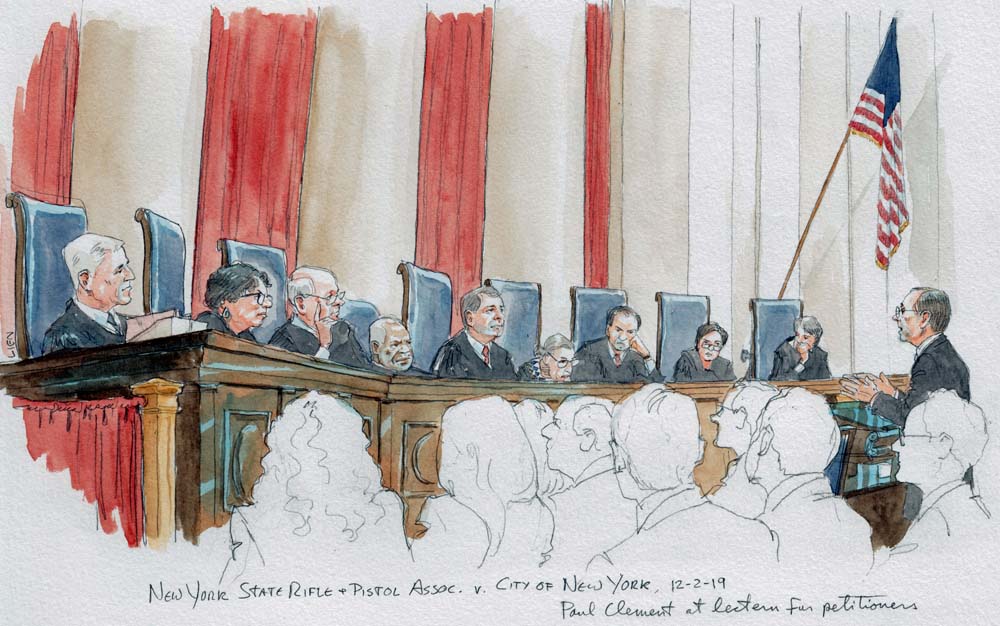 The lawsuit before the justices today was filed by New York City residents who have licenses to have guns at their homes. The gun owners wanted to be able to take their guns to target ranges and weekend homes outside the city, but they were barred from doing so by the city’s transport ban.

After a federal district court and the U.S. Court of Appeals for the 2nd Circuit upheld the ban, the gun owners went to the Supreme Court, which agreed to review the case in January. That announcement was significant, because the justices had not taken on a Second Amendment case for nearly a decade. But over the summer the city urged the justices to dismiss the case before it could be argued, explaining that because it had repealed the ban and the state had changed its laws, the gun owners had received everything that they had asked for. The justices declined to do so, instead setting the case for oral argument today. 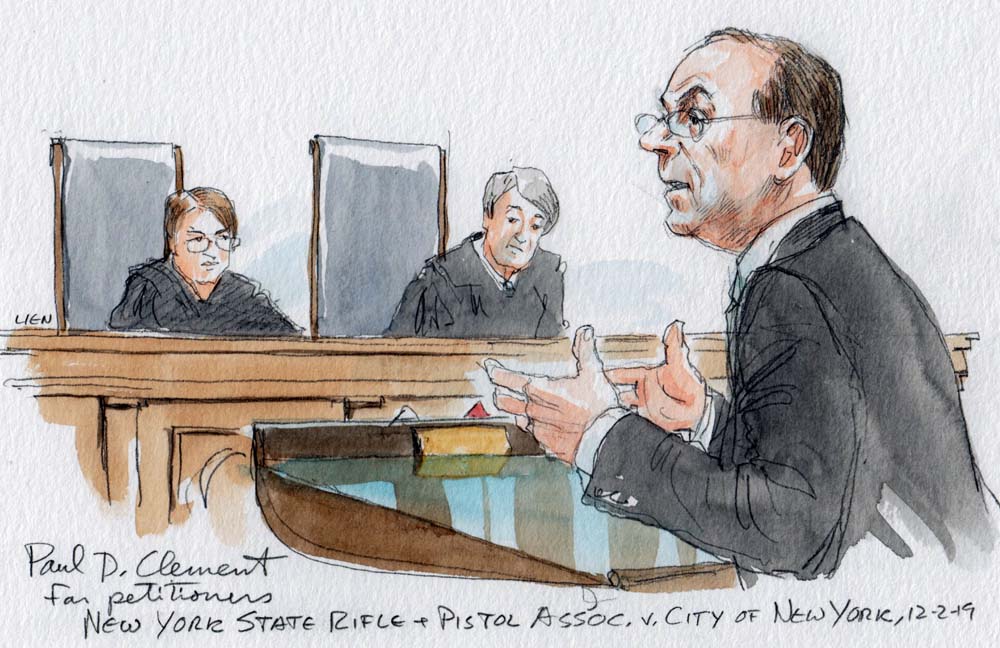 Arguing on behalf of the gun owners, former U.S. solicitor general Paul Clement told the justices that the text and history of the Second Amendment make clear that the city’s transport ban was unconstitutional. Complaining that the city has “struggled mightily to make this case go away,” Clement spent much of his time at the lectern fielding questions about whether the court should decide the Second Amendment question at all.

Justice Ruth Bader Ginsburg led the way, asking Clement what was left of his case, if his clients had already received everything they wanted. Justice Sonia Sotomayor echoed Ginsburg’s concern. She told Clement that he was asking the justices to take a case “in which the other side has thrown in the towel” and “opine on a law that’s not on the books anymore.”

Clement maintained that there is still a live controversy for the justices to tackle because, if his clients had prevailed in the district court, they would have asked for a declaration that the transport ban was unconstitutional and an order that would not only bar the city from enforcing the ban in the future, but also would prohibit it from considering past violations of the ban in future licensing decisions. Moreover, Clement added, the new scheme only allows continuous and uninterrupted travel outside the city, which means that gun owners can’t make stops for coffee or to use the restroom. More broadly, Clement continued, allowing a government to moot a case after the Supreme Court grants review would set a bad precedent. 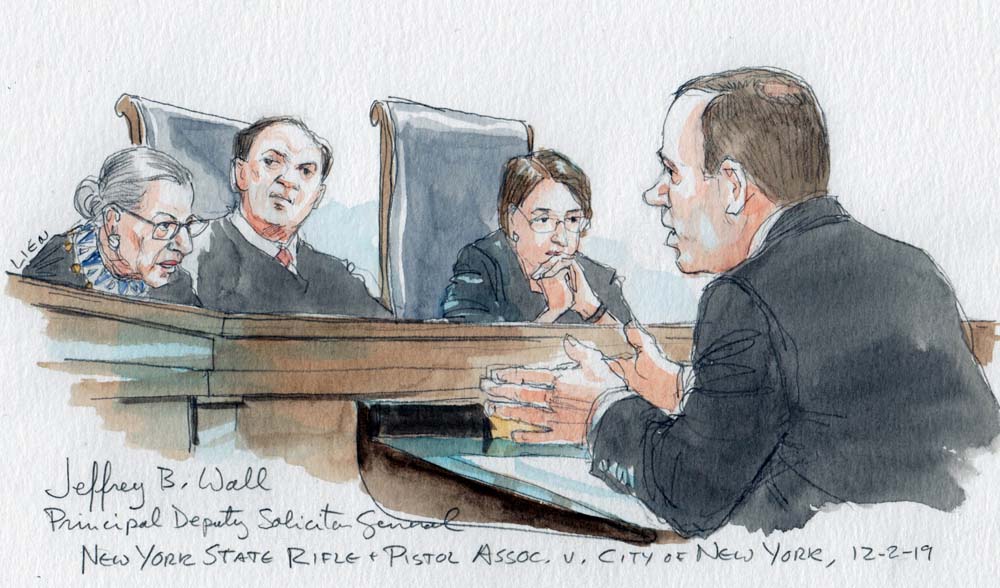 Jeffrey Wall, the deputy solicitor general who argued on behalf of the United States in support of the gun owners, agreed with Clement that the text and history of the Second Amendment “condemn” New York City’s transport ban. But like Clement, Wall spent most of his time discussing whether the case is moot. Just over two weeks ago, the federal government told the justices that the case is not moot because the gun owners could still seek money from the city as compensation for the violation of their Second Amendment rights, and Wall reiterated that position today.

Justice Neil Gorsuch seemed more sympathetic, however. When Wall described the gun owners’ theory that the case is still a live controversy because of the restrictions on their ability to stop for coffee or a restroom break while traveling as a “close call,” Gorsuch asked aloud, “Why isn’t that good enough? Why isn’t there a live controversy?” 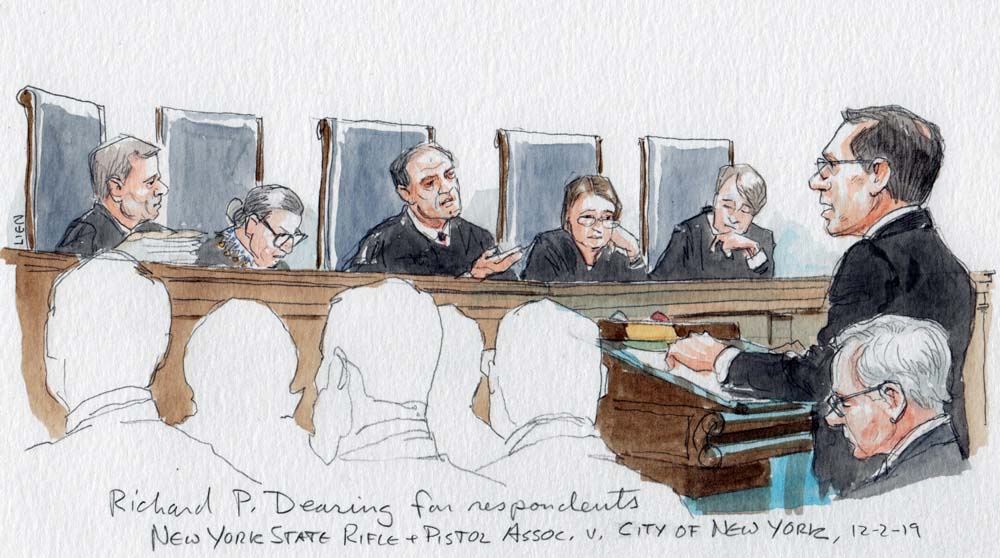 Arguing for the city, Assistant Corporation Counsel Richard Dearing assured the justices that the case is indeed moot because the gun owners have gotten everything they wanted. It is a good thing, Dearing posited, when the government responds to litigation by resolving matters through the democratic process. Dearing sought to cut off any concerns about the gun owners’ ability to stop for coffee, telling the justices that under the current scheme – which is provided by state law – it is “entirely permissible.”

Dearing faced skeptical questions from Justice Samuel Alito. What if, Alito asked, a gun owner won on the merits and wanted to stop to visit his mother on his way to a shooting range in New Jersey? Would that violate any law? When Dearing responded that it wasn’t clear, Alito pounced, asking Dearing, you don’t know?

Dearing reiterated that the focus should be on what the gun owners asked for in their complaint, which in this case was the ability to take their guns to shooting ranges and second homes outside New York City. The tide then seemed to turn slightly, as Chief Justice John Roberts asked Dearing whether gun owners would face any consequences, such as the ability to qualify for a license to keep a gun in their homes under the new law, for past violations of the transport ban.

When Dearing assured the justices that they would not, Kagan followed up to be sure. Do you have a way to communicate to the office that makes the licensing decisions, she pressed Dearing, that there should be no consequences? Yes, Dearing responded.

Alito and Gorsuch voiced concern that it would be unfair to dismiss the case as moot when the gun owners would not have had any reason to include a request for damages or worry about the prospect that the city would take the “extraordinary step of trying to moot the case” after the justices granted review. Why, Gorsuch asked, isn’t the prospect of damages enough, particularly when the district court could allow the gun owners to amend their complaint?

Alito and Gorsuch were the only justices who spoke up as staunchly opposed to dismissing the case as moot. The court’s more liberal justices all seemed inclined to do so, and the only comments that Roberts made suggested that he might be open to doing so as well. Justices Brett Kavanaugh and Clarence Thomas did not ask any questions.

There were relatively few clues as to how the justices might rule on the merits if they decide that the case is not moot, if only because so little of the argument time was devoted to the question of whether the transport ban violated the Second Amendment.

Clement suggested that the case is “straightforward,” telling the justices that the ban should be struck down because there is “no historical analogue” for this kind of rule. But Kagan saw the issue differently, observing that New York City has two different kinds of gun licenses: One, known as a premises license, confers the right to have a gun in the home, while the other confers the right to carry a gun outside the home. Your clients, she told Clement, are attacking the premises license, but why aren’t you attacking the carry-license scheme instead?

Wall similarly urged the court to adopt a test that focuses on whether a restriction on gun is consistent with the text, history and tradition of the Second Amendment, describing such a standard as following from the court’s 2008 decision in District of Columbia v. Heller. Sotomayor was dubious, dismissing it as a “made-up new standard.”

As on the mootness issue, Dearing’s toughest questions on the constitutionality of the transport ban came from Alito, who pressed him to concede that the Second Amendment protects the right to have a gun outside the home in at least some circumstances. Dearing countered that to be able to use a gun in the home effectively, the gun owner will sometimes need to be able to take the gun outside the home – for example, to a shooting range to practice. But the locations where people could practice with their guns have historically been regulated, and on this record, the transport ban passed muster. Moreover, Dearing added, although courts should start with the text, history and tradition to determine whether a particular rule violates the Second Amendment, those tools frequently will not answer the question conclusively.

The justices will meet this week to vote on the case. Even if a majority believes that the case is moot, we may not know for some time, because a ruling on mootness would almost certainly be accompanied by an opinion (and a dissent) explaining the justices’ views. If the justices don’t reach the Second Amendment question this time around, there are several other cases waiting in the wings.