This morning the Supreme Court heard oral argument in a relatively obscure case in which billions of dollars are at stake. At issue is whether health-insurance companies that lost money offering policies on the “health benefit exchanges” established by the Affordable Care Act are entitled to compensation for their losses, or whether Congress repealed any obligation that the government might have had. After 60 minutes of oral argument today, it seemed very possible – although not entirely clear – that the insurers have at least five votes in their favor.

The dispute centers on the “risk corridors” that Congress created as part of the Affordable Care Act to balance out the risks that insurers faced from offering health insurance on the exchanges. Congress recognized that the insurers would have relatively little information about the kinds of costs that their customers would incur because many customers would not have previously had insurance. Section 1342 of the ACA set up a mechanism by which insurers would share both profits and losses for the first three years in which the exchanges operated: Insurers that collected premiums that exceeded their costs would have to make “payments in” to the government to share the benefits, while insurers whose costs exceeded the premiums they collected would receive “payments out” from the government to help compensate for their losses. But in 2014 and the years that followed, Congress limited the funding that would be available to compensate insurers for their losses, which grew into the billions.

When the insurers went to court to recover the money, a federal appeals court agreed with them that Section 1342 requires the government to make the risk-corridor payments, but it ruled that the appropriations bills passed in 2014 and subsequent years “repealed or suspended” this requirement. The justices agreed to review that ruling earlier this year.

Arguing for the insurers, former U.S. solicitor general Paul Clement told the justices that this case presents a “massive government bait and switch” and the “fundamental question of whether the government must keep its word.” The government’s promise to pay the insurers, Clement suggested, would have been hollow if it hadn’t been clear that they would be reimbursed for their losses; because of that promise, Clement contended, the insurers undertook to sell insurance policies on the exchanges.

Justice Samuel Alito was the least sympathetic of the justices to the insurers’ position, and he peppered Clement with questions throughout Clement’s initial stint at the lectern. What if, Alito queried, the measures limiting the funds that were available to compensate the insurers had been included in the original legislation? Would it have made a difference? Or, Alito continued, what if the law had specifically provided that the money to reimburse the insurers would come only from the “payments in”?

Clement stressed that the ACA contained a “clear money-mandating promise” to pay the insurers. But that answer prompted a question from Justice Ruth Bader Ginsburg, who observed that the Supreme Court has been reluctant to read a right to sue into a law when Congress has not expressly provided one.

Clement countered that the ACA’s promise to pay the insurers has to create a right to sue. Even the late Justice Antonin Scalia (for whom Clement clerked), he noted, was generally skeptical about finding an implied right to sue, but Scalia recognized that the phrase “shall pay” in a statute gives rise to a right to sue the government.

Alito remained dubious. What is the difference, he asked, between a statute giving a nonmonetary right to sue and a statute establishing a right to be paid? Why should we be more sympathetic, he inquired, to the latter – is there a “special solicitude for insurance companies”?

Justice Elena Kagan chimed in, asking Clement whether there would be any limits on the right to sue the government to recover funds, or whether plaintiffs can simply rely on the phrase “shall pay” in a statute.

Clement allowed that there might be some limits – for example, courts might consider whether the statute specifies the amount of money to be paid, to whom and under what circumstances. But all of those criteria, he emphasized, are met in this case. Moreover, he added, in a point to which he would return again and again, the government clearly believes that the “shall pay” language creates a mandatory payment obligation when it is used in the same statute to require insurers to pay into the system when their premiums exceed their costs.

Chief Justice John Roberts also voiced some doubt. Your argument, he told Clement, is that the insurers were “basically seduced” into this program. But “they have good lawyers,” Roberts posited, who should have insisted on a specific funding provision for the risk corridors before they put the companies “on the hook” for $12 billion.

Clement pushed back, telling Roberts that although the “money-mandating promise” in the ACA could have been better, it was good enough – indeed, he reiterated, the government thought that the “shall pay” language was good enough to require insurers to make “payments in.”

Alito continued to press Clement, asking whether there was any other fund that the government could have used to pay the insurers, and whether Clement could identify any fund, other than the fund used to satisfy judgments against the United States, that would be used to compensate the insurers for a ruling in their favor.

Clement responded that he could not. But the obligation to pay the insurers, he told the justices, doesn’t go away just because the government doesn’t pay it. If, in 2014, Congress had indicated either that it would not make any more “payments out” or that the payments would be very limited, the insurers would have done things differently. 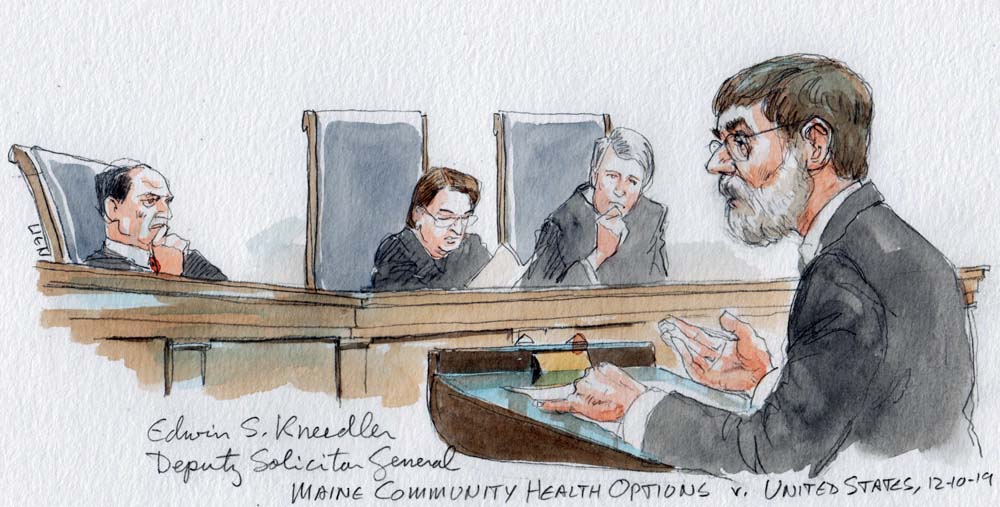 Edwin Kneedler, a deputy U.S. solicitor general, argued on behalf of the federal government. He told the justices that Section 1342 did not itself appropriate any money to pay the insurers; any payments to the insurers were contingent on Congress’ appropriating the funds. Congress may have only appropriated the “payments in” to compensate the insurers, but that is not a violation of Section 1342 for which a right to sue can be implied. A contrary ruling, Kneedler warned the justices, would impose “unprecedented liability” on the United States.

Kneedler faced even more questions than Clement, starting with Justice Stephen Breyer, who wanted to know why Section 1342 didn’t create a contract between the insurers and the government that would require the government to pay. Kneedler resisted any effort to compare the statute to a contract, telling Breyer that it was “very far from a contract,” but later in the argument both Roberts and Justice Sonia Sotomayor seemed to agree with Breyer.

Ginsburg pointed out that other legislation had been introduced that would have explicitly repealed the government’s obligation to pay the insurers. But those bills failed, she observed, and appropriations bills are only temporary legislation for a particular year. Why, she asked Kneedler, isn’t that significant? Kneedler responded that there was no significance to the rejection of the bills.

Roberts asked whether the government agreed that insurers would not have participated in the risk-corridors program if the government had not promised to compensate them for their losses. Kneedler acknowledged only that the insurers had “a number of incentives,” which prompted somewhat incredulous responses from both Roberts and Kagan, who asked whether he was saying “companies would have done the same thing without a promise to pay.”

Justice Brett Kavanaugh pressed Kneedler about Clement’s argument that Congress knows how to prevent the government from being financially obligated when it wants to – for example, by adding the phrase “subject to appropriations” after the phrase “shall pay.” Kagan added that using such language would put “people on notice” that the funds were not guaranteed, but Kneedler downplayed the significance of the argument as an “overreading” of the statute.

Toward the end of Kneedler’s time at the lectern, Kagan returned to the point that Clement had made: The government relied on the “shall pay” language to require insurers to pay into the program, but argued that it was not required to make “payments out.” “You pay in, we pay out if we feel like it. What kind of a statute,” Kagan asked rhetorically, “is that?”

With the tide seeming to shift in his favor, Clement ended his rebuttal by trying to address any concerns that the justices might have had about the magnitude of a potential $12 billion ruling against the government. You “shouldn’t lose sight of the fact,” he reiterated, that the government saved billions of dollars that it would have had to pay to subsidize health-insurance policies because insurers kept their premiums low, in exchange for a promise that the government would compensate them for their losses. Although predicting the outcome of oral argument is often tricky, particularly because neither Justice Clarence Thomas nor Justice Neil Gorsuch asked any questions, Alito seemed to be the only justice who was staunchly opposed to the insurers’ position, making it very possible that they will be able to pull together at least five (if not more) votes to reverse the lower-court’s ruling in favor of the government.