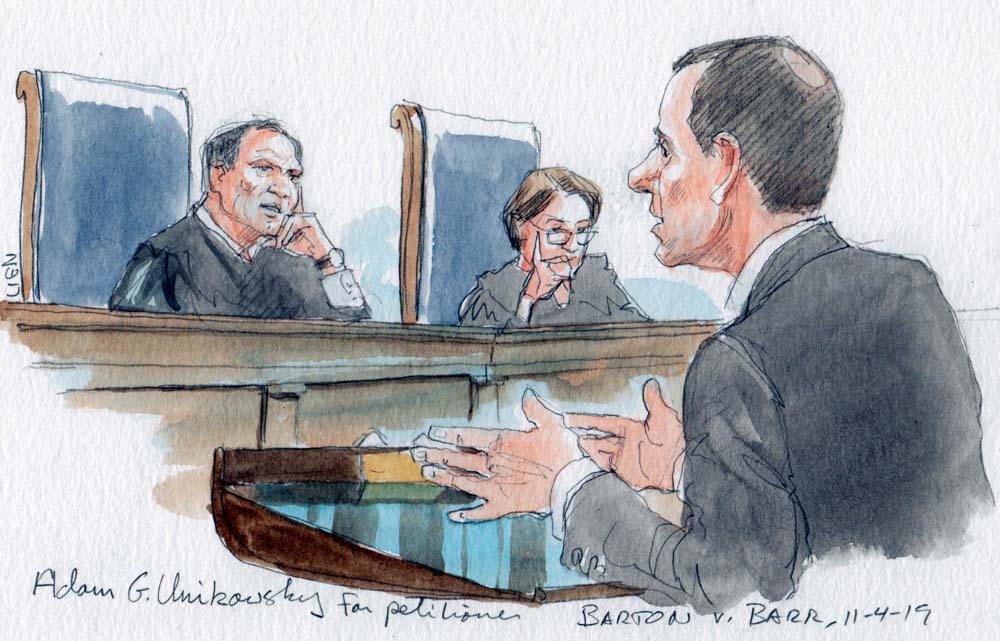 On Monday morning, the Supreme Court heard oral argument in Barton v. Barr, a case that requires the justices to decipher the stop-time rule, an oddly worded provision in the Immigration and Nationality Act. Congress embedded this rule within the statute governing cancellation of removal, an important form of relief for noncitizens in removal proceedings. Lawful permanent residents seeking cancellation of removal must demonstrate, among other things, seven years of continuous residence in the United States. The stop-time rule complicates that calculation by laying out occurrences that freeze the seven-year clock. Under the rule, the clock will stop

The wording of the stop-time rule implicates a core distinction in immigration law between inadmissibility (lack of fitness to be admitted to the United States) and deportability (susceptibility to expulsion following a lawful admission). In Barton, the justices must determine whether a past crime can “render[] … inadmissible” a lawfully admitted permanent resident who is not actually seeking admission to the United States. The U.S. Court of Appeals for the 11th Circuit said yes, reasoning that inadmissibility is a type of status that transcends the specific procedural posture of a case. After an hour of oral argument, the justices seemed to agree on only one thing: The stop-time rule is inartfully written. In the colorful words of Justice Stephen Breyer, “[I]t wasn’t a genius who drafted this.”

Attorney Adam Unikowsky, representing petitioner Andre Martello Barton, argued that the language of the stop-time rule presumes an actual adjudication of inadmissibility or deportability in the proceeding in which the rule is invoked. In other words, a crime “renders the alien inadmissible” and forecloses relief only if an immigration judge found the noncitizen to be inadmissible in the first phase of proceedings. To bolster his interpretation, Unikowsky highlighted two neighboring INA provisions: Section 1226, which relates to mandatory detention, and Section 1252, addressing appellate jurisdiction over immigration cases. In both provisions, the term “inadmissible” references an actual determination made in the noncitizen’s removal proceeding.

Justice Samuel Alito asked Unikowsky to address the INA provisions that mention inadmissibility in contexts in which the noncitizen is not seeking admission. Unikowsky maintained that some of these, including the sections relating to adjustment of status and temporary protected status, can be analogized to admission because they involve “affirmatively seeking … a new status.” After further prodding by Justice Sonia Sotomayor, Unikowsky discussed two provisions from the Immigration Reform and Control Act of 1986 that invoke “inadmissibility” in entirely different circumstances.  Assistant to the Solicitor General Frederick Liu, who argued the case for the government, heralded these IRCA provisions as evidence that inadmissibility determinations can be delinked from the process of seeking admission. Anticipating this line of argument, Unikowsky stressed that Sections 1226 and 1252 are more persuasive analogs than the IRCA, as they were enacted around the time of the stop-time rule, relate to the same subject matter, and are relatively adjacent in the INA.

Early in Unikowsky’s argument, Alito asked Unikowsky to concede that inadmissibility is a status that transcends the act of seeking admission to the United States. Unikowsky held firm in his position, insisting that a noncitizen must be deemed inadmissible in the context of an actual removal proceeding, and not just as a theoretical matter. Justice Brett Kavanaugh also pushed Unikowsky to embrace a more expansive reading of the statute, suggesting that Congress intended that a broad swath of criminal activity would trigger the stop-time rule. Justice Ruth Bader Ginsburg, who was relatively quiet during oral argument, posed a related question: “Why wouldn’t Congress want the clock to stop when an alien has committed a qualifying offense showing that he has abused the hospitality of the United States?”

Unikowsky pushed back, countering that the structure of the statute compels Barton’s reading. As he responded to the justices, Unikowsky put forth an argument based on statutory construction and legislative intent: If Congress had decided that particular conduct was not serious enough to trigger deportation, it would be illogical to conclude that legislators wanted the same conduct to foreclose discretionary relief. On the contrary, according to Unikowsky, Congress intended to “leave the door open a crack for cancellation of removal.”

Liu began his argument for the government by underscoring that the language of the stop-time rule says nothing about actually seeking admission. He then marched through the IRCA provisions from the 1980s that invoke inadmissibility outside of the context of seeking admission. This prompted a telling response from Chief Justice John Roberts, who described the parties’ battle of analogous provisions as “almost a wash.”

Breyer and Justice Elena Kagan kept Liu occupied as they challenged the government’s construction of the statute. Breyer noted that the government’s reading rendered an entire clause superfluous, prompting Liu to offer some interpretive rebuttals, and eventually to minimize the significance of that surplusage. Kagan signaled support for Barton’s central claim, offering that “the structure and the content of the statute, is all written to … refer to the essential dichotomy [between inadmissibility and deportability].” According to Kagan, the use of the disjunctive “or” in the statute supports Barton’s reading. Kagan emphasized that if Congress had intended to capture a broader range of conduct, it could easily have opted for simpler statutory wording. She also questioned Liu about the use of present tense rather than the subjunctive in the stop-time rule, suggesting that this grammatical choice indicates that Congress was referring to the actual removal proceeding, not some possible future proceeding.

Attempting to throw Liu a lifeline, Alito invoked an analogy offered by the lower court. According to this analogy, rot renders a fish “inedible” regardless of whether someone tries to eat it. Likewise, Alito implied, a noncitizen can be inadmissible if they are not actually seeking admission. Kagan quickly inverted this wordplay, offering that “you wouldn’t say a car is immovable if the car has just been moved.” Barton’s prior admission to the United States, Kagan was suggesting, makes all the difference.

Toward the end of the argument, Sotomayor pressed Liu on whether the government’s reading undermines Congress’ intent to preserve cancellation of removal as a remedy, especially for lawful permanent residents like Barton. Sotomayor emphasized the special solicitude the INA gives to long-term permanent residents.

At the end of the hour, Barton’s fate remained unclear. Breyer, Kagan and Sotomayor appeared to support Barton’s reading of the statute, while Alito and Kavanaugh seemed inclined toward the broader interpretation advanced by the government. With only brief interventions from Ginsburg and Roberts – and silence from Justices Neil Gorsuch and Clarence Thomas – the status of the remaining votes is uncertain. If the justices split on broader questions of congressional intent, consensus may ultimately emerge around the cleanest, most logical reading of the statute.