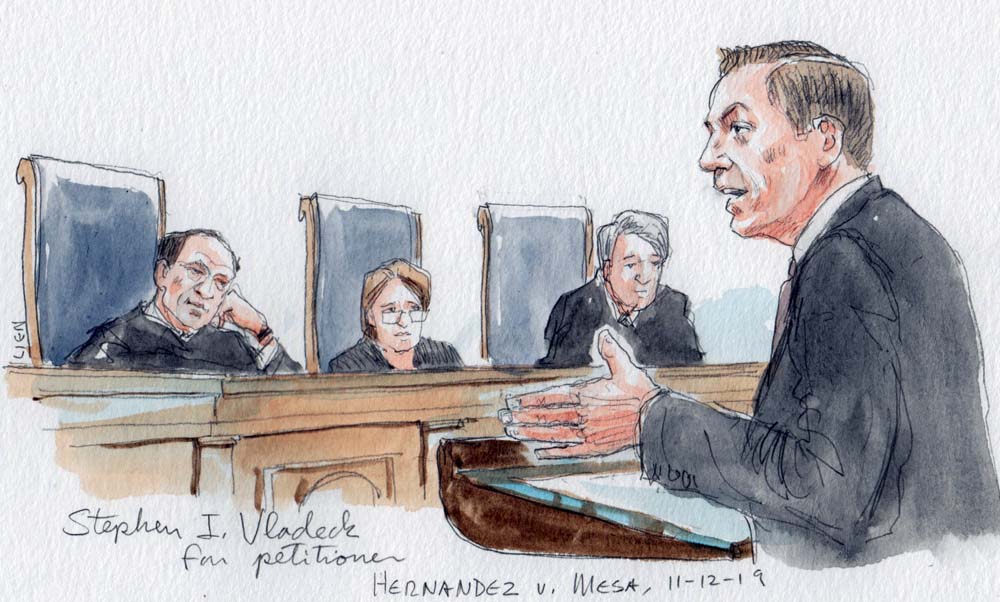 For the second time in less than three years, the family of Sergio Hernandez was at the Supreme Court today for oral argument. In 2010, Sergio – who was then 15 years old – was on the Mexican side of the U.S.-Mexico border when he was shot and killed by a U.S. Border Patrol agent, Jesus Mesa. The Hernandez family filed a lawsuit against Mesa in federal court in Texas, arguing that Mesa had used excessive force against Sergio, which violated Sergio’s rights under the Fourth and Fifth Amendments to the U.S. Constitution. The dispute now before the Supreme Court centers on whether the family’s lawsuit can go forward. After an hour of oral argument this morning, the family seemed to face an uphill battle, with the justices closely divided.

The Hernandez family’s case hinges on a 1971 case named Bivens v. Six Unknown Named Agents, in which the Supreme Court allowed a lawsuit seeking money damages from federal officials for violating the Constitution to go forward. When the family’s case was at the Supreme Court for the first time in 2017, the justices sent it back to the lower court for another look in light of their decision that term in a case brought against federal officials by Middle Eastern men who were in the United States illegally and were detained after the September 11 attacks. In that case, Ziglar v. Abbasi, the court concluded that a Bivens remedy should not be extended to a “new context” when there are “special factors counseling hesitation” and when Congress has not affirmatively created such a remedy.

When the case went back to the 5th Circuit, the full court ruled that the Hernandez family cannot rely on Bivens to bring their claim against Mesa. Writing for the court, Judge Edith Jones concluded that allowing the family’s case to go forward would require the court to extend Bivens to a “new context” because it isn’t clear whether the Constitution applies to a foreign citizen on foreign soil. And in any event, she continued, there are special factors suggesting that the court should hesitate before extending Bivens.

The Hernandez family returned to the Supreme Court, and the justices agreed to weigh in again. Arguing on behalf of the Hernandez family, lawyer Stephen Vladeck observed that everyone agrees that the family would be able to sue Mesa if Sergio had been standing on the U.S. side of the border. The fortuity of where the victim is standing, Vladeck told the justices, should not matter – particularly when the family does not have any other remedy available to it.

Vladeck faced a series of skeptical questions from the court’s more conservative justices. Chief Justice John Roberts, for example, was reluctant to create a new Bivens remedy that would apply to the family’s case. He reminded Vladeck that the court issued its decision in Bivens almost 50 years ago and suggested that there has been a “fairly dramatic change” since then in terms of “how we approach things as implying causes of action.” Moreover, Roberts added, it has been 40 years since the Supreme Court has recognized a new Bivens remedy. Can you “explain to us,” Roberts asked Vladeck, “why we should take your approach today?”

Like the government and the 5th Circuit, Roberts also expressed concern that allowing the family’s lawsuit to go forward would interfere with the relationship between the United States and Mexico. Roberts noted that there has been diplomatic correspondence between the two countries about this incident. If the courts step into this conflict and potentially start providing answers that conflict with what the U.S. government is saying, Roberts told Vladeck, “that is the type of thing that makes it a new context.” “I thought the country was supposed to speak with one voice,” Roberts concluded.

Justice Brett Kavanaugh observed that if Bivens were a law, there would be a presumption that it did not apply outside the United States and therefore wouldn’t apply here. “What,” Kavanaugh asked Vladeck, “is your answer to that?”

Vladeck countered that even if the presumption did apply to Bivens, the family’s case would still be different because Mesa was on U.S. soil when he shot Hernandez.

Justice Neil Gorsuch worried aloud about how far Vladeck’s rule would go. Would it mean, he asked, that any foreign national who is injured overseas by an action in the United States would be able to file a lawsuit? “I can think of a lot of cases that that’s going to encompass,” Gorsuch posited – “not just cross-border shootings” but all kinds of injuries.

Arguing for Mesa, lawyer Randolph Ortega stressed that the Hernandez family was asking the Supreme Court to create a cause of action where none has existed since the beginning of our country’s history. But both Ortega and Jeffrey Wall, the deputy U.S. solicitor general who argued on behalf of the United States, faced a barrage of questions from the court’s more liberal justices.

Although Roberts was troubled by the possible foreign-affairs implications of a ruling for the family, Justice Elena Kagan pressed Wall to explain the government’s concerns – especially, she noted, when the government of Mexico would prefer that the family be able to rely on Bivens. That led to a heated exchange between Kagan and Wall, in which Wall asked Kagan, somewhat incredulously, whether she really thought that “the next time we go in to talk to Mexico and take a position on something at the border, they won’t say, how is your representation credible? You told us last time that your officer didn’t do anything wrong. And your own courts, potentially even your own Supreme Court, told you you were wrong. I think it does directly undermine the credibility of the executive branch in working with a foreign government.”

Kagan shot back, “Why wouldn’t the United States then say, you know, we live in a country in which courts play an important role in determining whether conduct is lawful. And that’s not an embarrassment to the United States or the executive branch.”

Kavanaugh chimed in, asking Ortega why there wouldn’t also be foreign-policy consequences if a Mexican national were killed on the U.S. side of the border. “Those kinds of incidents,” Kavanaugh said, “create lots of international and foreign policy implications as well” – but a Bivens remedy would be available to the victim.

Kavanaugh also asked Ortega whether it should matter that, if a Bivens remedy is not available, the Hernandez family will not have any other avenue for relief.

Ortega responded, as Wall did later, that it should not. The Hernandez case is “heartbreaking,” Wall said, but any concerns about a remedy in these kinds of cases should come from Congress. Although a majority of the justices seemed inclined to agree, the answer could hinge on Kavanaugh’s vote.