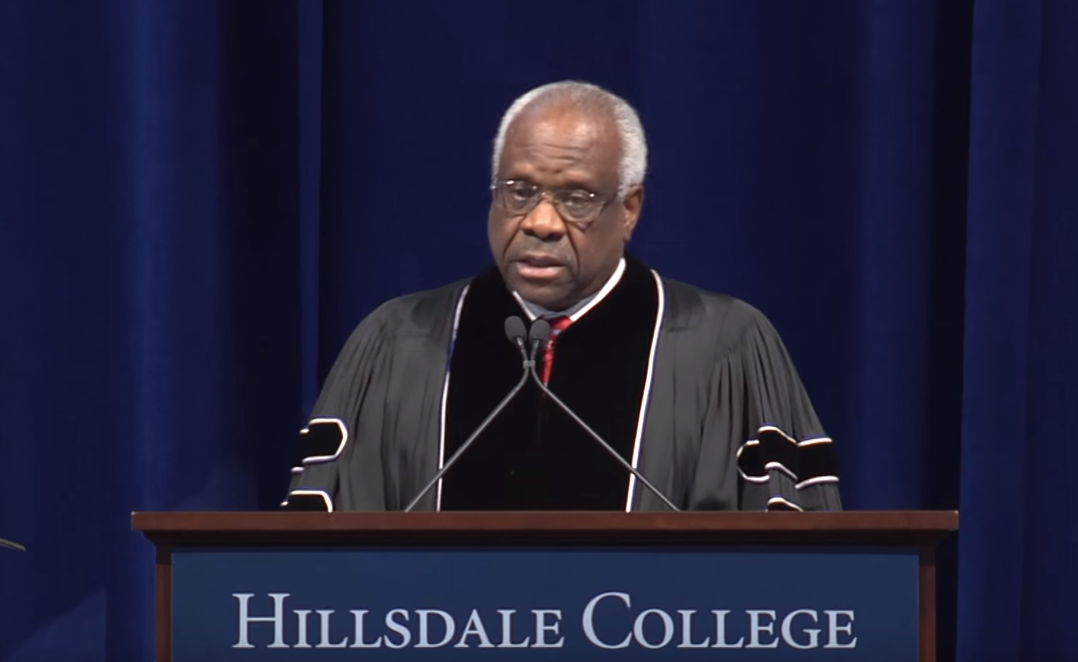 On Thursday morning, Justice Clarence Thomas gave remarks at Hillsdale College in Michigan to celebrate the private Christian college’s 175th anniversary and the dedication of its newly completed Christ Chapel. Known for his reticence on the bench, Thomas generally limits his speeches outside the courtroom, previously noting that “my personality is not such that I enjoy public appearances.”

Thomas largely shied away from commentary on the Supreme Court. Instead, the justice focused his remarks on the importance of faith in both his own life and higher education in general.

Raised Roman Catholic, Thomas conceded that in adolescence he “became greatly disillusioned with the Church.” Not until President Ronald Reagan recruited Thomas to chair the Equal Opportunity Employment Commission in 1982 – a time Thomas described as “one of the darkest periods of my life” due to both personal and professional challenges – did Thomas return to Catholicism. “In the midst of the hardship and grief,” he explained, “God drew me back to the Church.”

Leading the EEOC is not the only struggle through which Thomas credits his perseverance to religious conviction. “God used this renewed faith,” he disclosed, “to sustain me and my wife through my confirmation hearings” to the Supreme Court, which devolved into controversy when Thomas was accused of sexual harassment by his former employee Anita Hill.

Thomas then pivoted to consider the “broader significance” of Hillsdale’s new chapel. He lamented the gradual exodus of religion from higher education beginning in the 20th century amid “questions about the continuing relevance of religious instruction on campus” – questions that, Thomas suggests, “would have surprised the founders of those schools.” Thomas dwelled on this theme of founders, praising President John Adams’ view of religion’s integral role in our national fabric. “Our country was founded,” Thomas posited, “on the view that a correct understanding of God and the human person is critical to preserving the liberty that we so enjoy.”

Thomas painted the chapel’s construction as a counter to this trend of secularization in schools. In this “crucial time in our nation’s history,” Thomas proclaimed, “the construction of a college chapel” is both “a public declaration that faith and reason are mutually enforcing” and “a bold act of leadership.”

Such leadership, in Thomas’ view, plays an essential role in a “battle to preserve and promote freedom in our country.” And Christ Chapel, Thomas said, stands as a “declaration to a watching world that faith and learning are rightly understood as complements.” Citing Reagan’s caution that “freedom is never more than one generation from extinction,” Thomas issued a dire warning to the listeners crowded into the chapel: “The preservation of liberty is not guaranteed. Without the guardrails supplied by religious conviction, popular sovereignty can devolve into mob rule, unmoored from any conception of objective truth.”