Editor’s Note: An earlier version of this post ran on September 3, 2019, as an introduction to this blog’s symposium on Bostock v. Clayton County, Altitude Express v. Zarda and Harris Funeral Homes v. EEOC, as well as at Howe on the Court, where it was originally published. 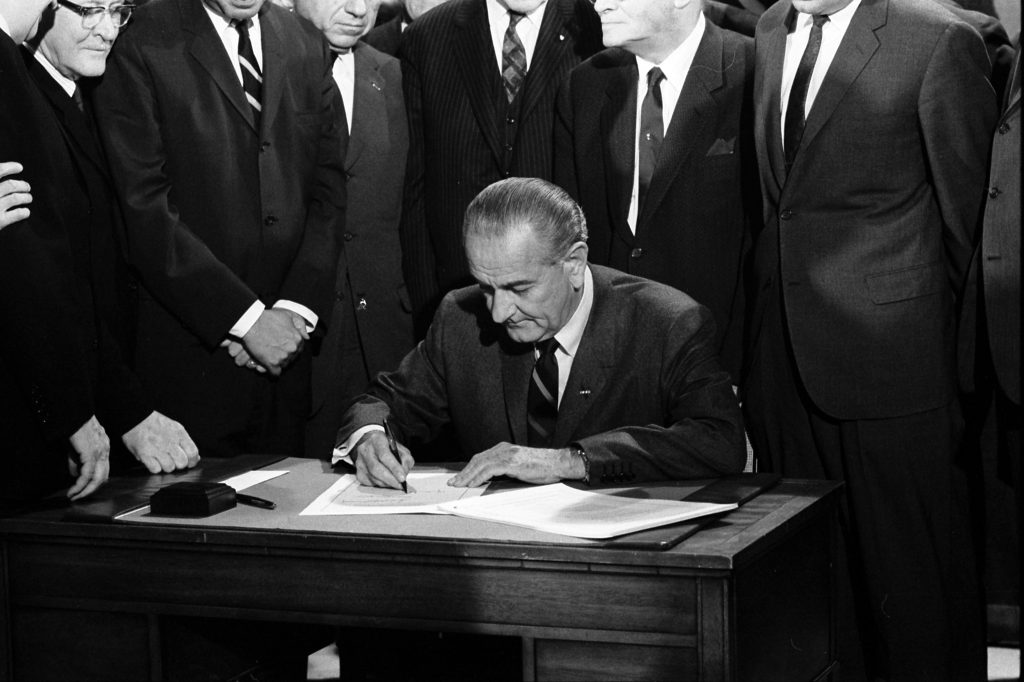 On Monday, October 7, the first Monday in October, the justices of the Supreme Court will return to the bench for the first oral arguments of the new term. The next day, the court will tackle a trio of cases that could prove to be some of the biggest of the term. At issue is whether federal employment discrimination laws, first passed by Congress in 1964, that bar discrimination “because of sex” protect gay, lesbian and transgender employees.

First up on October 8 are the cases of Donald Zarda and Gerald Bostock, which will be argued together. Zarda (who died in 2014, and who is represented in the Supreme Court by the executors of his estate) was a skydiving instructor who sometimes told female clients that he was gay to make them feel more comfortable when they were strapped to him for a jump. Gerald Bostock received good performance reviews while working as the child-welfare-services coordinator for Clayton County, Georgia, for over a decade. Both men were fired – according to them, because they were gay.

Zarda and Bostock went to federal court in New York and Georgia, respectively, where they argued that firing them because they were gay violated Title VII of the Civil Rights Act of 1964, which prohibits discrimination “because of sex.” The U.S. Court of Appeals for the 11th Circuit ruled that Bostock’s case could not go forward, because Title VII does not apply to discrimination based on sexual orientation. But the U.S. Court of Appeals for the 2nd Circuit reached the opposite conclusion: It reasoned that discrimination based on sexual orientation is a “subset of sex discrimination.”

Bostock asked the justices to review the 11th Circuit’s ruling, while Altitude Express – Zarda’s former employer – did the same for the 2nd Circuit’s decision. After considering the two cases at 11 consecutive conferences, the Supreme Court announced that it would take up both appeals.

The fact that Title VII’s ban on employment discrimination “because of sex” plainly encompasses discrimination based on sexual orientation, Bostock and Zarda continue, is all that matters, even if the Congress that enacted Title VII may not have intended to protect gay and lesbian employees. They point to a unanimous 1998 Supreme Court decision, authored by the late Justice Antonin Scalia, holding that same-sex sexual harassment can violate Title VII. In that case, Scalia wrote that although “male-on-male sexual harassment in the workplace was assuredly not the principal evil Congress was concerned with when it enacted Title VII,” “statutory prohibitions often go beyond the principal evil to cover reasonably comparable evils, and it is ultimately the provisions of our laws rather than the principal concerns of our legislators by which we are governed.”

Altitude Express and Clayton County push back, arguing that a ruling for Bostock and Zarda would “rewrite” Title VII. Title VII does not bar discrimination based on sexual orientation, they stress. All that Title VII does, Altitude Express contends, is ban employers from treating “employees of one sex better – or worse – than the other sex and doing so because” they are men or women. Title VII does not “reach – and certainly no one in 1964 would have thought it reached – employment actions based on sexual orientation, because those actions do not disadvantage employees of a particular sex.”

In any event, Altitude Express and Clayton County continue, this is a complicated issue that is best suited for Congress, rather than the courts, to resolve. They note that Congress has repeatedly considered whether to make clear that Title VII bars discrimination based on sexual orientation, but it has declined to do so.

As might be expected in such a high-profile pair of cases, each side has garnered an array of “friend of the court” briefs. Over three dozen separate briefs were filed in support of Bostock and Zarda, including one brief by 206 companies – including business giants such as Apple, Facebook, Uber, Walt Disney and Coca-Cola. The businesses tell the justices that a ruling that Title VII bans discrimination based on sexual orientation would not be “unreasonably costly or burdensome” for employers. In fact, they suggest, making clear that Title VII prohibits sexual-orientation discrimination would create benefits for businesses, from providing “consistency and predictability” nationwide to making it easier to “recruit and retain top talent.”

Clayton County and Altitude Express have slightly fewer allies, with just over two dozen “friend of the court” briefs supporting them. But significantly for them, the federal government filed a brief that echoes the defendants’ argument that Title VII’s ban on discrimination “because of sex” only bars employers from treating members of one sex differently from members of the opposite sex. The government adds that “Congress of course remains free to legislate in this area; and employers, including governmental employers, remain free to offer greater protections to their workers than Title VII requires.” (Indeed, the government notes, in April of this year Attorney General William Barr specifically barred discrimination based on sexual orientation and gender identity at the Department of Justice.) But, the government concludes, “those are policy determinations, currently left to political and private actors, not the courts.”

The second case on October 8 involves Aimee Stephens, who worked for six years as a funeral director and embalmer at R.G. & G.R. Harris Funeral Homes in Michigan. When Stephens began work at Harris Funeral Homes in October 2007, she dressed and appeared as a man and went by the name of Anthony. But when Stephens disclosed in 2013 that she intended to live and work as a woman for a year and would then have sex-reassignment surgery, the funeral home fired her. The owner of the funeral home, Thomas Rost, later testified that he fired Stephens because Stephens “was no longer going to represent himself as a man. He wanted to dress as a woman” – which Rost, who is a devout Christian, believes would violate “God’s commands.”

Stephens filed a discrimination charge with the Equal Employment Opportunity Commission, which filed a complaint against the funeral home in 2014. The EEOC alleged that firing Stephens because she is transgender violated Title VII. A federal district court agreed with the funeral home that Title VII’s protections do not apply to transgender employees, but the U.S. Court of Appeals for the 6th Circuit reversed. The funeral home asked the Supreme Court to take up its case, and last spring the justices agreed to decide whether Title VII bars discrimination against transgender people, either because they are transgender or because the law bans sex stereotyping.

Stephens’ arguments in her brief on the merits are analogous to those made by Bostock and Zarda. She emphasizes that discrimination occurs “because of sex” when someone is treated differently based on his or her sex. Even if Title VII only applies to the sex that an individual is assigned at birth, she contends, discrimination based on transgender status is still a decision made “because of sex”: In her case, if she had been “assigned a female rather than a male sex at birth,” the funeral home “would not have fired her for living openly as a woman.”

Stephens contends that the funeral home also violated Title VII when it fired her because she did not “conform to its owner’s views of how men and women should identify, look, and act.” The Supreme Court, Stephens explains, “has long recognized that discharging an employee because of the employer’s sex-based stereotypes violates Title VII.”

The funeral home counters that what matters is the meaning of sex discrimination when Congress enacted Title VII in 1964. “In 1964, as today,” it tells the justices, such discrimination occurs “when employers favor men over women, or vice versa, because of their sex. That is what Title VII forbids.” Because the funeral home would have treated a female employee who wanted to dress as a man the same way it treated Stephens, it concludes, there is no discrimination here.

The funeral home warns that a ruling for Stephens will have sweeping implications. Not only will it rob women and girls of fair chances in sports, but it may require doctors and hospitals to “provide transition services even in violation of their religious beliefs.”

U.S. Solicitor General Noel Francisco filed a brief on behalf of the EEOC – which had originally filed the complaint against the funeral home – arguing that the 6th Circuit’s ruling should be reversed. Just as Title VII’s bar on discrimination “because of sex” does not apply to discrimination based on sexual orientation, the government contends, it also does not ban discrimination based on transgender status “as such.” Instead, Title VII only bans employers from treating women less favorably than men in the same position, and vice versa.

Similarly, the government continues, discrimination against transgender people because they don’t conform to sex-based stereotypes about how men and women should behave does not, standing alone, violate Title VII. “Title VII’s protections apply fully to transgender individuals,” the government explains, “but the fact that a plaintiff is transgender does not change the legal standard or analysis”: A transgender plaintiff still must show “that an employer treated members of one sex less favorably than” members of the opposite sex in the same position.

Before his retirement in 2018, Justice Anthony Kennedy provided the key vote in several cases involving gay rights. During the oral arguments in October, all eyes will likely be on Kennedy’s successor, Justice Brett Kavanaugh, who in his first term on the court assumed (at least to some extent) Kennedy’s role as a swing justice. But another Trump appointee, Justice Neil Gorsuch, could also play a pivotal role: Gorsuch has followed in the footsteps of Scalia, whom he succeeded, in demonstrating his devotion to the text of the statute. And no matter how the case comes out, the Supreme Court is likely to issue its decision in the spring or summer of 2020, potentially putting the court front and center in the presidential election.