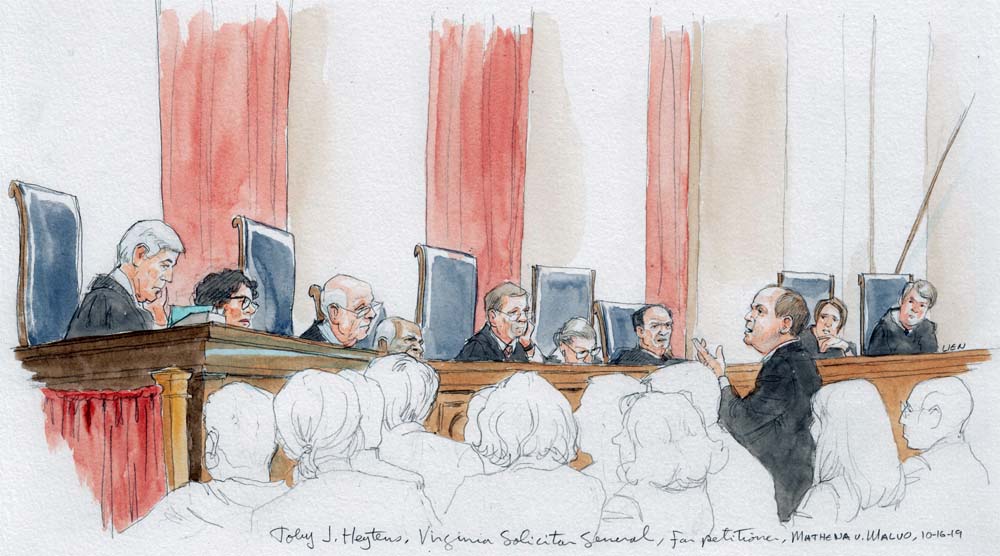 It has been 17 years since John Allen Muhammad and Lee Boyd Malvo, known as the “D.C. snipers,” shot and killed 12 people and injured six more. The Washington, D.C., area was paralyzed with fear until the then-42-year-old Muhammad and Malvo, who was then 17, were arrested at a Maryland rest stop. Muhammad was sentenced to death and executed in 2009, and Malvo was sentenced to life in prison without the possibility of parole. This afternoon the Supreme Court heard oral argument in Malvo’s challenge to that sentence. After an hour of oral argument, it seemed possible that Malvo’s case might not be over yet, with Justice Brett Kavanaugh potentially the pivotal vote.

Two cases are at the heart of the dispute before the justices. In 2012, in Miller v. Alabama, the Supreme Court ruled that mandatory life-without-parole sentences for defendants who were under the age of 18 violate the Eighth Amendment, which bars cruel and unusual punishment. And in 2016, in Montgomery v. Louisiana, the justices concluded that Miller’s prohibition of life-without-parole sentences applies to convictions that had become final before Miller was decided. Malvo went back to court in 2017, arguing that, as a result of the two decisions, his sentence was unconstitutional. The lower courts agreed and ordered Virginia to resentence him, reasoning that the judge and jury had not had a chance to consider whether a shorter sentence might be more appropriate because of Malvo’s age. The Supreme Court granted Virginia’s petition for review of that ruling earlier this year.

One theme in this afternoon’s oral argument was the basic question of whether Miller’s rule applies to Malvo’s case, or whether it is limited to mandatory life-without-parole sentences. Arguing on behalf of Randall Mathena, the warden at the prison where Malvo is serving his sentence, Virginia Solicitor General Toby Heytens told the justices that, if Miller is not about mandatory sentences, “much of it doesn’t make sense.” 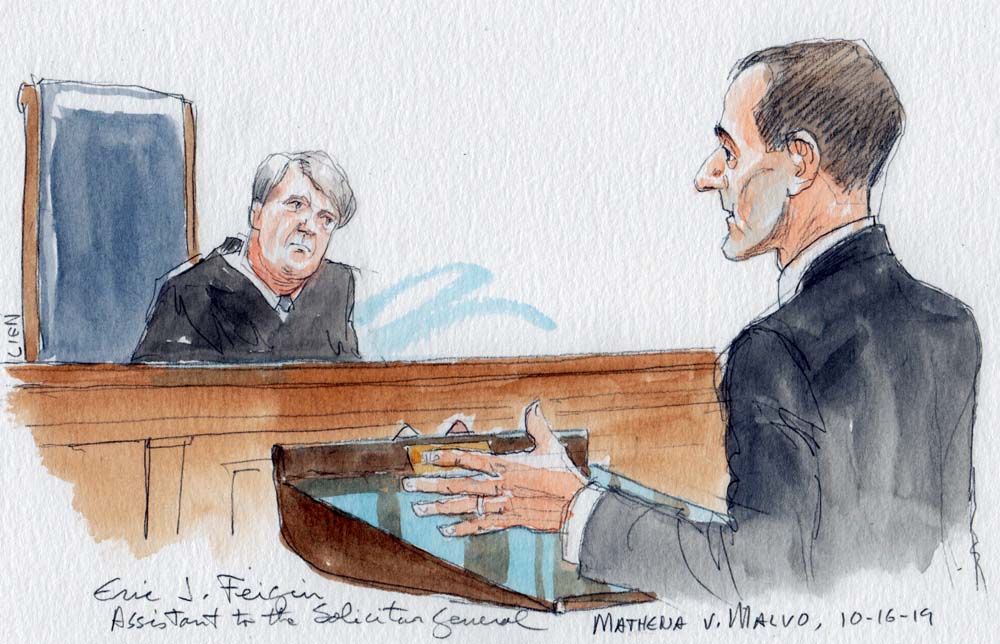 Eric Feigin, the assistant to the U.S. solicitor general who argued on behalf of the federal government as a “friend of the court” supporting Virginia, echoed this idea. Miller, he said, applies only to mandatory sentences of life without parole.

But Justice Elena Kagan took a different view. “I think Miller makes clear,” she said, “that youth matters.” Even if that case involved mandatory life-without-parole sentences, she stressed, the entire reasoning of the decision was that courts need to consider a defendant’s youth. 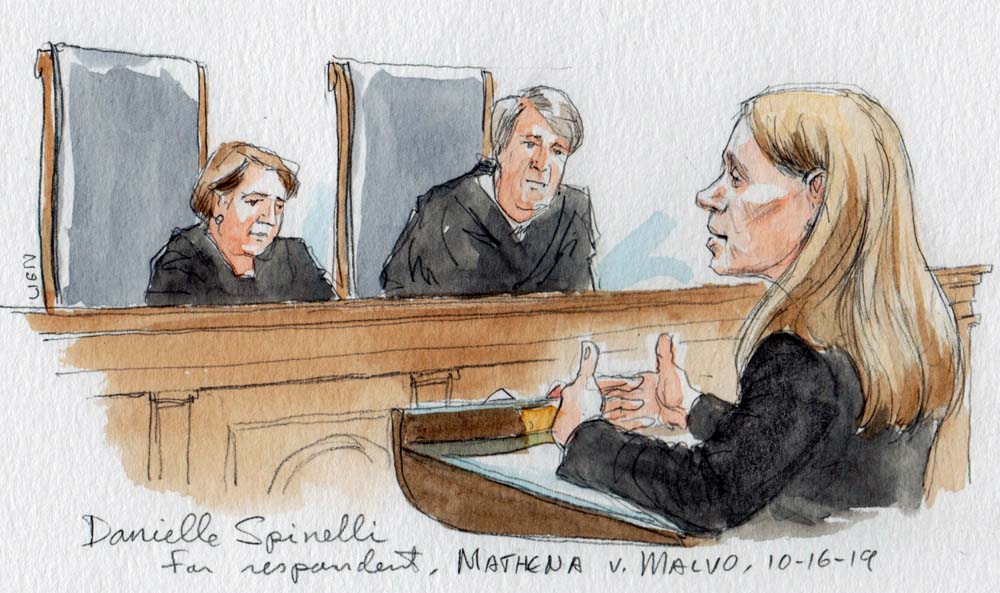 Lawyer Danielle Spinelli, who represented Malvo, agreed. In Miller, she said, the court ruled that the Eighth Amendment prohibits life sentences without the possibility of parole for juveniles.

Justice Samuel Alito challenged Spinelli. Where, he asked, does Miller say that? Miller bars only mandatory life-without-parole sentences for juveniles, he asserted.

A significant chunk of the oral argument was devoted to a discussion of two related issues: whether the judge or jury had in fact had an opportunity to consider Malvo’s youth, and what kind of scheme would satisfy the constitutional requirements created by Miller and Montgomery going forward.

Justice Ruth Bader Ginsburg was the first to broach the issue of how much discretion the judge and jury had actually had in sentencing Malvo, observing that the jury in his case had two choices: death or life without the possibility of parole. No one, she said pointedly, thought that there was any discretion to impose any other sentence.

Spinelli returned to this idea later on. Malvo, she reminded the justices, was sentenced before the Supreme Court’s 2005 decision in Roper v. Simmons, which banned capital punishment for juveniles. The only issue before the judge and jury was whether Malvo would be sentenced to death or instead to life in prison without the possibility of parole; it was “not at all clear” that Malvo could request any other sentence. And there was no way that the court could have considered his youth, as Miller now requires, when the Supreme Court hadn’t yet made clear that youth was a factor to be considered.

Kavanaugh asked both Heytens and Spinelli about the broader question of how courts should approach sentencing of juveniles. If Miller and Montgomery require the sentence to consider a defendant’s youth to determine whether he is incorrigible (and therefore should be sentenced to life in prison without parole) or instead simply immature (and therefore should have at least the possibility of parole), Kavanaugh asked, would that requirement be satisfied by a discretionary regime that includes the defendant’s youth among the factors that the sentence must consider or that allows the defense counsel to raise the issue? That proposal seemed to draw support from an array of justices, including Kagan, Justice Sonia Sotomayor and perhaps even Chief Justice John Roberts.

Justice Neil Gorsuch was less enthusiastic about Spinelli’s assertion that Miller and Montgomery require a hearing to determine whether a defendant is so “incorrigible” that a life-without-parole sentence is appropriate. Given the Supreme Court’s cases requiring juries to find facts that increase the penalty for a crime, Gorsuch posited, wouldn’t the Supreme Court have specified who – a judge or a jury – should make a determination about whether a defendant is “incorrigible”? The court’s failure to do so, he told Spinelli, is a “strike” against you.

Toward the end of the hearing, Sotomayor suggested that the justices were “in an awkward place” in dealing with Malvo’s case because of what she seemed to view as uncertainty about what Malvo’s attorneys could have done to raise the issue of his youth at his sentencing. Justice Stephen Breyer repeated this concern a few minutes later, telling Heytens that the “odds are greater than 50/50 that no one ever thought about whether” Malvo was “immature.”

By the end of the hour, Malvo’s fate was not clear. It seemed possible that a majority might try to navigate a middle ground that sends the case back for the lower courts to take a closer look at whether Malvo had a real opportunity to have the judge and jury consider whether his youth might warrant a lighter sentence. Andrew Cohen, a fellow at the Brennan Center for Justice, notes that – regardless of the outcome of today’s proceedings – Malvo himself is “unlikely to ever leave prison since he’s sitting on 10 life sentences.” But, as Spinelli told the justices, 13 other inmates who were juveniles at the time of their crimes are currently serving life-without-parole sentences in Virginia, so they too will be watching this case closely.