A “view” from the courtroom: Pop culture and protocol

Things were already going to be a little crazy outside the Supreme Court for today’s arguments in the Title VII cases. So, the discovery of two suspicious packages on the plaza this morning is most unwelcome. The packages are investigated by the authorities, but they disrupt foot and vehicular traffic around the court just as argument time approaches.

The building remains open, and reporters are escorted up to the courtroom well before 9:30 a.m., which gives us the chance to scope out the scene.

First, the VIP box. Yesterday, three of the justices’ spouses attended the first day of the term. Today, all the spouses are evidently staying home. Carrie Severino of the Judicial Crisis Network, the co-author of a recent book on the nomination of Justice Brett Kavanaugh, has a seat in the middle of that section.

A number of judges who won’t be casting votes in today’s cases are here. Patricia Millett of the U.S. Court of Appeals for the District of Columbia Circuit is in the bar section, where she will move the admission of a group in a few minutes. Meanwhile, Judge Loretta Preska of the U.S. District Court for the Southern District of New York is here, and she also will be pressed into bar-admission duties.

In the public gallery, another member of the D.C. Circuit is here — Judge Cornelia Pillard. Although her seat is farther back than those of her judicial colleagues, Pillard will soon be able to brag that perhaps she had the better seat. At 9:32, the star wattage of the room increases significantly with the arrival of Laverne Cox, the transgender actress and LGBTQ advocate. Cox has spoken out frequently in support of Aimee Stephens, the transgender woman at the center of today’s second case, R.G & G.R. Harris Funeral Homes Inc. v. Equal Employment Opportunity Commission.

Cox is seated by court personnel in the third or fourth row of the public gallery, and Pillard is close enough to greet her.

A few minutes later, Stephens arrives, using a wheelchair, and she takes a spot in the front row of the public section. Her case will be argued today by David Cole, the national legal director of the American Civil Liberties Union and the husband of Pillard. 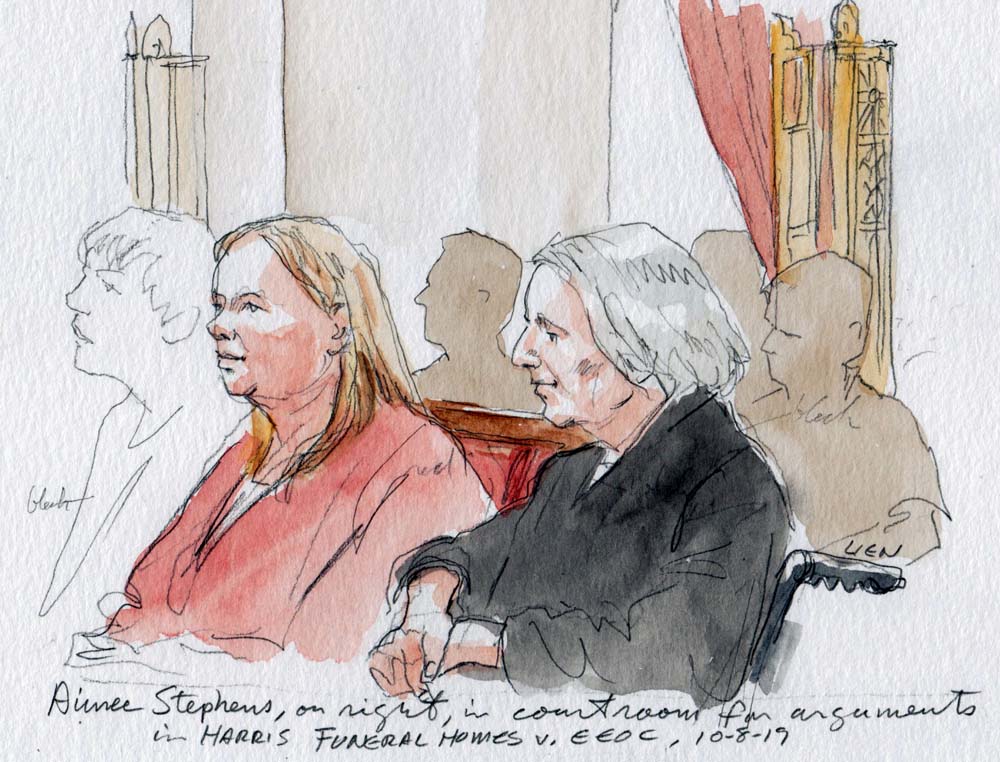 On the other side of this case, Thomas and Nancy Rost arrive and take seats in the middle section of the public gallery. Thomas Rost is the owner of Harris Funeral Homes.

Several participants in the first case set for argument, the consolidated cases of Bostock v. Clayton County, Georgia and Altitude Express Inc. v. Zarda are here, including Gerald Bostock, who alleges that he was dismissed from his job as a child-welfare-services coordinator because he is gay. Melissa Zarda, the sister of Donald Zarda, the skydiving instructor who alleged that he was fired because of his sexual orientation, is here. Her brother died in a skydiving accident after he filed his lawsuit. Donald Zarda’s former partner, Bill Moore, is also here. It is unclear whether anyone affiliated with Altitude Express or Clayton County is here other than their legal representatives.

When the court takes the bench at 10 a.m., Justice Clarence Thomas is back at work after missing yesterday with a touch of the flu. Two members of the court may have a spring in their step this morning after their favorite baseball teams won last night. The New York Yankees beat the Minnesota Twins 5-1 to complete a sweep that will send them on to the American League Championship Series. That should please Justice Sonia Sotomayor.

Earlier last evening, the Washington Nationals staved off elimination by beating the Los Angeles Dodgers 6-1, sending their divisional series back to L.A. for the fifth and deciding game, on Wednesday. And that should please Justice Brett Kavanaugh. I don’t know if the justice was at the games in Washington the last two nights, but The Wall Street Journal reported over the weekend that he had attended every Nationals postseason appearance since the team’s arrival in the nation’s capital in 2005.

(There was even postseason baseball being played early yesterday afternoon while the court heard its third argument of the day, though we doubt any notes were being passed to the justices updating them on the score of the Houston Astros-Tampa Bay Rays contest.)

The two hours of arguments in Bostock and Harris Funeral Homes are intense. Amy Howe has this blog’s main account.

She is asked by Justice Ruth Bader Ginsburg how she would answer the argument that sexual-orientation protection could not have been on the mind of Congress in 1964, when Title VII was passed.

“In 1964, those were the days of Mad Men,” she said in reference to the hit TV series depicting a swinging advertising agency culture of the 1960s. “So the idea that sexual orientation would have been reached, most courts didn’t find sexual harassment to be actionable until this court did.”

Later, Justice Samuel Alito asks Karlan about an employer who “makes a decision based on sexual orientation but does not know the biological sex of the person involved.”

Karlan fights the hypothetical at first, before concluding that this is “Saturday Night Live Pat.”

“Well, I’m not familiar with that,” Alito says.

Karlan tries to jog his memory about the memorable recurring character of ambiguous gender played by Julia Sweeney on SNL in the 1990s.

It’s “the person named Pat, and you can never tell whether Pat is a man or a woman,” Karlan says. Presumably, Alito’s clerks, or his children, can direct him to some archival “It’s Pat” video clips on the web.

Karlan makes the point several times that differential treatment based on sex does not always equate to discrimination.

“When I got up, the Chief Justice said to me, ‘Ms.’ Karlan,” she says. Referring to Jeffrey Harris, the lawyer arguing for the employers in the sexual-orientation cases, Karlan adds, “I am willing to bet any amount of money I have that when Mr. Harris gets up, he is going to say ‘Mr.’ Harris. He treated us differently because of sex. That is not discriminatory because neither of us has been subjected to a disadvantage.”

When it is time for Harris to begin his argument, the chief justice devilishly recognizes him by saying “Counsel” instead of “Mr. Harris.”

As the courtroom erupts in laughter, Roberts says, “Sorry.”

Harris delivers the traditional opening, but with a conscious emphasis on the first word: “Mr. Chief Justice, and may it please the court.”

“Touché,” Roberts replies, as the courtroom laughs some more.

Not everything is tinged with humor today. One odd moment comes after Alito expresses concerns about the court’s “deciding a major policy question that was not in Congress’s mind in 1964, and then Congress has repeatedly failed to address in the years since then.”

Karlan provides an answer, which is followed by one of Justice Stephen Breyer’s trademark long, drawn-out questions, during which he makes an offhand reference to the concern “that Alito is bringing up in one form.”

Alito briefly looks toward Breyer at this minor breach of protocol of not using the word “Justice.”

During the second argument, there is a snippy moment when Justice Neil Gorsuch asks John Bursch, the lawyer representing Harris Funeral Homes, about some lower court judges’ views about the reach of Title VII. Bursch gives an answer that fills two paragraphs in the transcript, which is about long enough for another justice to interrupt with a question. Justice Elena Kagan does just that, asserting that Bursch is making Title VII about groups instead of individuals.

Gorsuch seems slightly aggrieved, and before Bursch can respond to Kagan, Gorsuch interrupts his colleague. 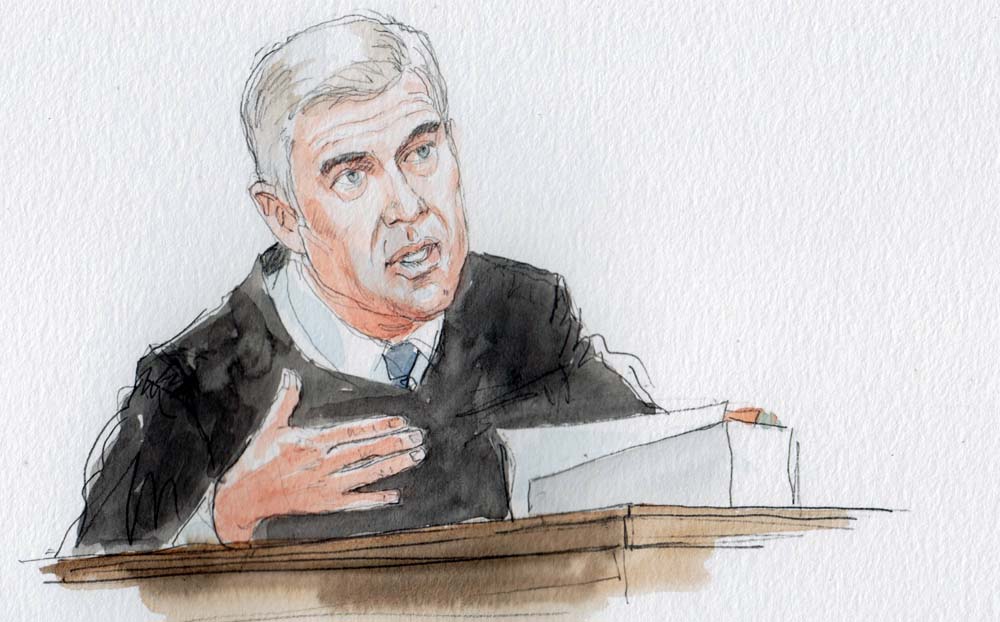 “That’s helpful,” Gorsuch says, “but I’m also curious what you have to say, Mr. Bursch.”

Bursch seeks to smooth things over by saying, “Let’s put both of those [questions] together.” (Kagan isn’t satisfied, and she tries her question again a few minutes later.)

Today was the second day of the court’s new procedures for allowing lawyers two minutes of uninterrupted time at the beginning of their arguments (one minute for amici), with additional changes to rebuttal-time procedures.

The justices seem to be getting into the groove. The lawyers, most of whom are not regular participants in Supreme Court oral arguments, seem a bit thrown off.

Barely six minutes into her argument today, Karlan is met with a lull in questioning, which prompts her to say, “Well, if no one has any further questions, I’ll reserve the remainder of my time for rebuttal.”

She would have had about 23 or 24 minutes left, which prompts laughter but also a look of mild alarm on the chief justice’s face.

“Well, I think we’ll have further questions,” he quickly says. And the justices do.

Later, when Harris’ white light comes on, to signal he has five minutes left, he seems disconcerted.

“I’m running out of time,” he says, before speeding up his rate of talking.

Soon enough, time runs out on these two hours of argument, and spectators make their way to the plaza, which has been cleared of suspicious objects. TV cameras are waiting, as are loud, competing rallies on the adjoining sidewalk.