A justice who never stopped learning 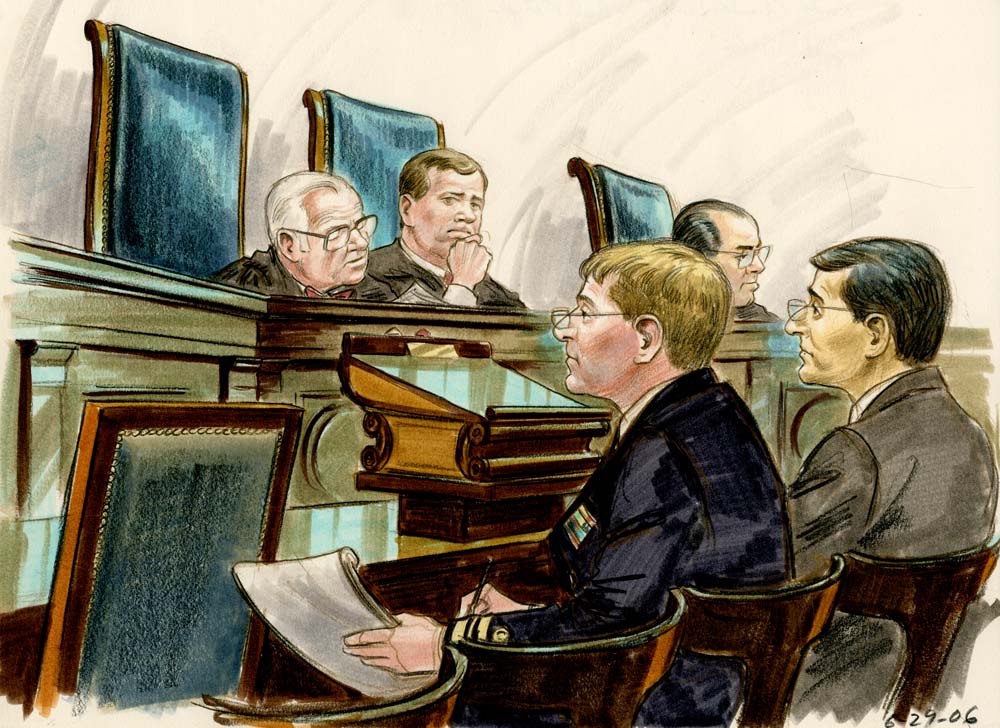 The sketch at top shows Justice Stevens delivering the opinion from the bench. In the foreground are Hamdan's two attorneys: Cmdr Charles Swift who represented Hamdan before the Military Commissions, and Neal Katyal who argued his case before the Supreme Court.
Share

Susan Estrich is a law professor at the University of Southern California School of Law and a partner at Boies Schiller Flexner. She clerked for Justice John Paul Stevens in 1978-1979.

John Arthur Spenkelink was the first about-to-be-executed man who petitioned the Supreme Court to save his life since the moratorium on the death penalty was lifted in 1976. (Gary Gilmore was the first man, but he did not authorize the petitions by others.)

Spenkelink was scheduled for execution at 7:00 a.m. on Wednesday, May 23, the first man to be executed in Florida under its newly revised death-penalty statute.

We were all told that at least one clerk from each chambers had to cover until midnight.

Jim Liebman and I did everything together (we were the two-clerk experiment with a more intimate chambers), including working until at least midnight every night), but neither of us expected the petition to stay Spenkelink’s execution to come to the junior justice.

The petition would go first to Justice Powell, who oversaw the U.S. Court of Appeals for the 5th Circuit, which included Florida. He would deny it. Then it would go to either Justice Brennan or Justice Marshall, who would sign it, giving us until the next morning to brief the justice.

At around 9:00, the eight other chambers were told that Justice Rehnquist, who was handling the matter because Powell was unavailable, had indeed denied the stay. As predicted. Brennan or Marshall?

The phone rang again. They were sending it to us.

We called the justice. He gave us directions to an apartment in Arlington, Virginia, where he had recently moved. I had very little idea where I was going. I had no interior lights in my aging Ford Maverick. I handed Jim the flashlight. He started reading. I started speeding.

For the next hour we sat with the justice, looking for a cert-worthy issue. It would take four votes to grant cert. It would, in short, take Justices Stevens and Stewart. The lawyers were smart.

We couldn’t find mistakes, at least not ones that changed anything that mattered.

We gave it our best shot. We came up with alternate arguments.

Justice Stevens called Justice Stewart. They went over our best shots. He hung up the phone and called the clerk to tell him we were on our way back with the unsigned petition.

Jim put down all the windows in case either of us threw up.  I broke more speed limits.

We ran to the Supreme Court’s side entrance at 11:45 p.m. Justice Marshall was waiting for us. “I think you have something for me to sign,” he said.

Spenkelink was executed on Friday morning, after the full Supreme Court lifted the stay.

My co-clerk Jim Liebman went on to be one of the leading lawyers and academics fighting the death penalty.

And it made perfect sense that I clerked for the most liberal justice on the Supreme Court, which is not what anyone was saying back in 1979.

Justice Stevens was fond of saying that it wasn’t that he had moved over the years; the court had.

When I saw the justice on his 90th birthday, I reminded him of what happened on May 22, 1979. He remembered.

That’s what has changed, he said to me. You don’t have two justices conferring late at night on possible errors by the trial court. You don’t have trial courts striving to avoid mistakes, and appellate courts looking carefully to make sure they won’t be called to task.

Death cases became routine. The law may say death is different, but if a majority of the court saw no error when the defense lawyer fell asleep during the trial, it clearly was not different enough. The lower courts got sloppy and the appellate courts didn’t stop them and at the Supreme Court, the stay applications and cert petitions were read by one clerk for the cert pool, which at various points has included as many as seven justices. Gilmore and Spenkelink were conveniently white; a disproportionate number of those who came later were not.

The system – including the Supreme Court – could not be relied on to put men and women to death. Doing so still costs more than imprisoning them for life, but it doesn’t buy anything approaching perfect justice. Mostly just endless delays.

By then, I knew how extraordinary Justice Stevens was. Not just as a lawyer and a writer and an advocate, although he was surely that.

He was an extraordinary judge. He approached his task with respect for precedent and for the legal process. He cared about the facts – if you write the facts clearly and convincingly, he taught me, you’re done – and he cared deeply about the law. He once told me he thought there was a right answer to most issues if you looked hard at it, and it was true more often than a properly politicized young lawyer at that time was ready to recognize.

But he also recognized his responsibility to judge, and he did so with as clear a compass as I have ever seen.

The Supreme Court did change, but of course so did he, in the best possible way. He never stopped learning. He had the courage to revisit his own decisions, and the wisdom to look again, and again. He didn’t have to be right. You didn’t have to agree with him.