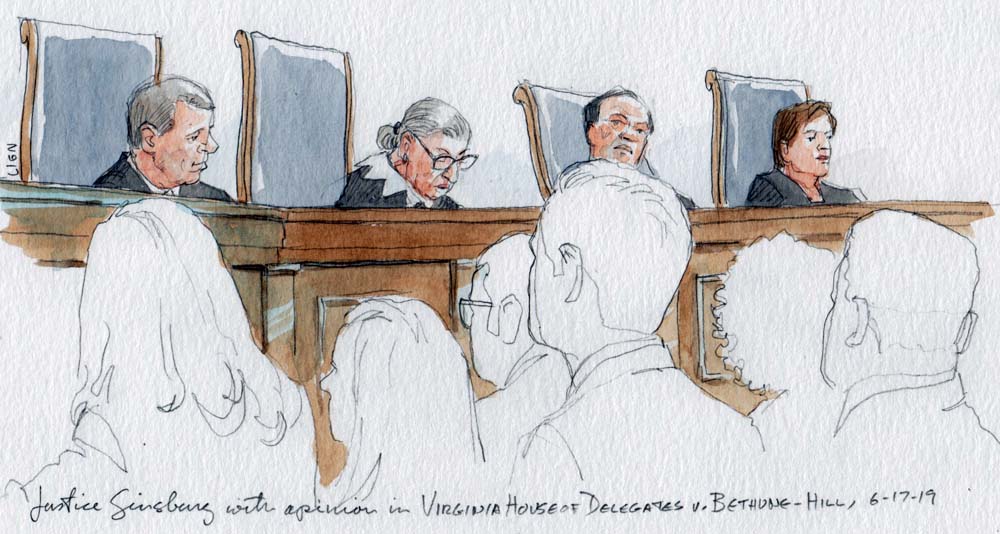 Last week Virginia held its primary election for the state’s House of Delegates. It used a new map, which had been drawn with the help of a court-appointed expert after a federal court threw out the old one. The lower court ruled that 11 districts were the product of unconstitutional racial gerrymandering – that is, the legislators who drew the districts relied too heavily on race. Today a divided Supreme Court left that decision in place, ruling that the state’s legislature did not have a legal right – known as “standing” – to appeal the district court’s decision to the Supreme Court. The decision means that the state’s general election in November will likely go forward using the same new map. 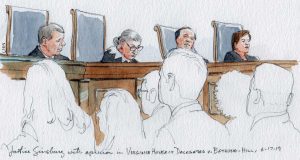 The lawsuit that led to today’s decision was filed five years ago by residents of 12 different legislative districts in Virginia. They argued that by creating districts in which 55 percent of the voters were African-American, the legislature had diluted the strength of African-American voters in neighboring districts, giving Republicans an advantage there. A federal district court rejected the residents’ argument, but the Supreme Court sent the case back for the lower court to take another look at 11 of the 12 districts.

When the case returned to the lower court, the district court struck down the old map. Race, the district court concluded, had been the primary factor behind the design of each district, and the legislature had not shown that each district needed to have a voting-age population that was 55-percent African-American. When Virginia’s attorney general declined to appeal the ruling to the Supreme Court, the state’s House of Delegates did so instead, and the justices heard oral argument in March.

By a vote of 5-4, the justices today dismissed the House of Delegates’ appeal. Justice Ruth Bader Ginsburg wrote for the majority, in an opinion that was joined by Justices Clarence Thomas, Sonia Sotomayor, Elena Kagan and Neil Gorsuch.

Ginsburg also rejected the House’s argument that it has standing to appeal in its own right. Addressing the House’s contention that it is “the legislative body that actually drew the redistricting plan” and would lose power to draw the new districts if a remedial order gave that power to the district court, Ginsburg observed that state law gives power over redistricting to the state’s General Assembly, “of which the House constitutes only a part.” This case is therefore different, Ginsburg reasoned, from a 2015 case in which the Supreme Court agreed that both houses of Arizona’s legislature could challenge the constitutionality of a referendum that gave authority over redistricting to an independent commission. Moreover, Ginsburg added, in the Arizona case the referendum permanently deprived the legislature of its role in redistricting, while in this case the remedial order “does not alter the General Assembly’s dominant initiating and ongoing role in redistricting.”

Ginsburg similarly dismissed the House’s argument that it had standing to appeal the district court’s order because the new maps would affect its membership: Even if that were true, she concluded, “the House as an institution has no cognizable interest in the identity of its members,” and changes to those members therefore would not provide the kind of harm that the House would need to have standing.

Justice Samuel Alito dissented, in an opinion that was joined by Chief Justice John Roberts and Justices Stephen Breyer and Brett Kavanaugh. Alito would have held that the House did have standing because the use of the new court-ordered map would “harm the House in a very fundamental way.” In particular, Alito explained, “it is precisely because of the connections between the way districts are drawn, the composition of a legislature, and the things that a legislature does that so much effort is invested in drawing, contesting, and defending districting plans.” “To suggest otherwise, to argue that substituting one plan for another has no effect on the work or output of the legislative body whose districts are changed,” Alito posited, “would really be quite astounding.”