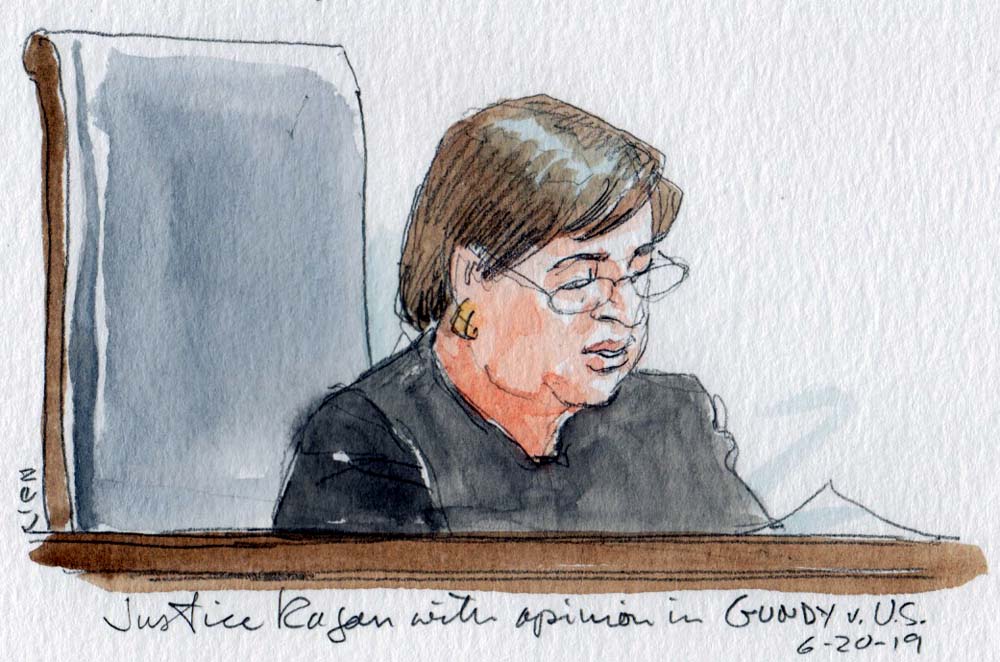 Justice Kagan with opinion in Gundy v. US
Share

The Supreme Court today refused to resurrect the nondelegation doctrine, the long-dormant principle that Congress cannot transfer its power to legislate to another branch of government. The case, Gundy v. United States, involved a provision of the Sex Offender Registration and Notification Act that confers on the attorney general the authority to “specify the applicability” of SORNA’s registration requirement to “sex offenders convicted before” the date of SORNA’s enactment. For Herman Gundy, the petitioner, the decision has a straightforward and immediate meaning: his sentence will stand. For the nondelegation doctrine, the significance of Gundy lies not in what the Supreme Court did today, but in what the dissent and the concurrence portend for tomorrow. 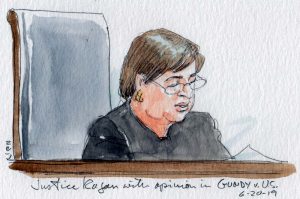 The Gundy vote was badly fractured and only eight justices participated in deciding the case, because Justice Brett Kavanaugh had not yet been confirmed to the court when the case was argued last October. Justice Elena Kagan’s plurality opinion was joined by Justices Ruth Bader Ginsburg, Stephen Breyer and Sonia Sotomayor. Justice Neil Gorsuch’s dissent was joined by Chief Justice John Roberts and Justice Clarence Thomas. Justice Samuel Alito concurred in the judgment only, which both deprived Kagan of a majority and prevented a 4-4 per curiam affirmance.

Gundy had contended that SORNA conferred “unguided,” “unchecked” and “plenary” power upon the attorney general to create, remove or revise registration requirements for pre-act offenders. If read that way, said Kagan, the provision would indeed pose a “nondelegation question.” But Kagan did not read the statute that way. Taking the approach hinted at by her questions at oral argument, Kagan instead construed SORNA “to require the Attorney General to apply SORNA to all pre-Act offenders as soon as feasible.” She pieced together support for this construction from SORNA’s declaration of purpose (to establish “a comprehensive national system” for sex-offender registration); its definitional provision (defining “sex offender” as an “individual who was convicted of a sex offense”); and its legislative history. Returning to the text of the key phrase, Kagan wrote that “‘[s]pecify the applicability’ … does not mean ‘specify whether to apply SORNA’ to pre-Act offenders at all, even though everything else in the Act commands their coverage. The phrase instead means ‘specify how to apply SORNA’ to pre-Act offenders if transitional difficulties require some delay.”

Is there a nondelegation problem with a statute that instructs the attorney general to apply registration requirements to pre-act offenders as soon as feasible? “That question is easy,” wrote Kagan: “[N]o.” Citing a string of very broad delegations that the Supreme Court has upheld since 1935, Kagan sized SORNA’s delegation as “distinctly small-bore” in comparison. Moreover, she added, “if SORNA’s delegation is unconstitutional, then most of Government is unconstitutional.” Congress is “dependent” on the “need to give discretion” to executive officials charged with implementing its programs. The court’s long-standing course of refusing to second-guess these “necessities of government” is, Kagan concluded, one of both “wisdom” and “humility.”

At 33 pages, Gorsuch’s dissent is nearly twice as long as Kagan’s 18-page plurality. On the question of how to interpret SORNA, Gorsuch took the polar opposite view of the statute from the plurality: SORNA “endow[s] the nation’s chief prosecutor with the power to write his own criminal code.” As Gorsuch read it, the breadth of SORNA’s delegation is “vast” and gives the attorney general “free rein.” The statute says “nothing about feasibility,” argued Gorsuch, and nothing in the particular provision at issue, the statute’s statement of purpose, its definitional terms or its legislative history can be regarded as cabining the breadth of the power that SORNA delegates to the executive or as supplying a standard by which to exercise that power.

That statutory analysis of SORNA bookends the dissent. Its long middle portion contains Gorsuch’s analysis of the history of the nondelegation doctrine and why it should be revived. Gorsuch argued that nondelegation doctrine honors the Constitution’s original text and design, and that it promotes stability, fair notice, the protection of minority rights, political accountability, and broad social consensus in lawmaking.  Noting that the court has “an obligation to decide whether Congress has unconstitutionally divested itself of its legislative responsibilities,” he next asked: “[W]hat’s the test?” Gorsuch set out three types of delegations that are constitutionally permissible: (1) legislation in which Congress makes the important policy decisions but leaves it to the executive to “fill up the details”; (2) legislation in which Congress prescribes the rule but leaves it to the executive to conduct fact-finding when the rule is applied; and (3) legislation that allows the executive broad discretionary power concerning matters that also fall within a zone of executive power, such as foreign affairs.

Gorsuch then pointed to “the evolving ‘intelligible principle’ doctrine” as the explanation for the Supreme Court’s “quiescence” since the 1930s on the delegation front. Gorsuch did not disapprove of the decision in J.W. Hampton, Jr., & Co. v. United States, in which the court announced the intelligible principle doctrine, instead rationalizing it as consistent with older tests; “the [J.W. Hampton] Court’s reference to an ‘intelligible principle’ was just another way to describe the traditional rule that Congress may leave up to the executive the responsibility to find facts and fill up details.” Instead, Gorsuch wrote, it was in the late 1940s that the “mutated version” of the intelligible principle test appeared. In subsequent years, he explained, the court has sometimes reached the right result while applying this test, for example in cases such as Loving v. United States, which involved the president’s independent Article II power. In other areas, he said, other doctrines have picked up the slack: “We still regularly rein in Congress’s efforts to delegate legislative power; we just call what we’re doing by different names.” Gorsuch cited the major-questions exception and vagueness cases as examples of these “hydraulic pressures” at work.

Gorsuch closed by explaining that SORNA is unconstitutional under this stricter version of the nondelegation doctrine. He argued that SORNA does not involve filling up the details or “deciding the factual predicates to a rule set forth by statute”; nor does it involve an area of “overlapping” inherent Article II authority, such as the field of foreign affairs. Allowing SORNA’s delegation to stand, Gorsuch said, would “invite the tyranny of the majority that follows when lawmaking and law enforcement responsibilities are united in the same hands.”

Finally, Alito concurred only in the judgment, saying: “If a majority of this Court were willing to reconsider the approach we have taken for the past 84 years, I would support that effort.” Alito thus indicated that he would be receptive to future nondelegation challenges, but that he was not willing to rule in Gundy’s favor here: “[I]t would be freakish to single out the provision at issue here for special treatment.”