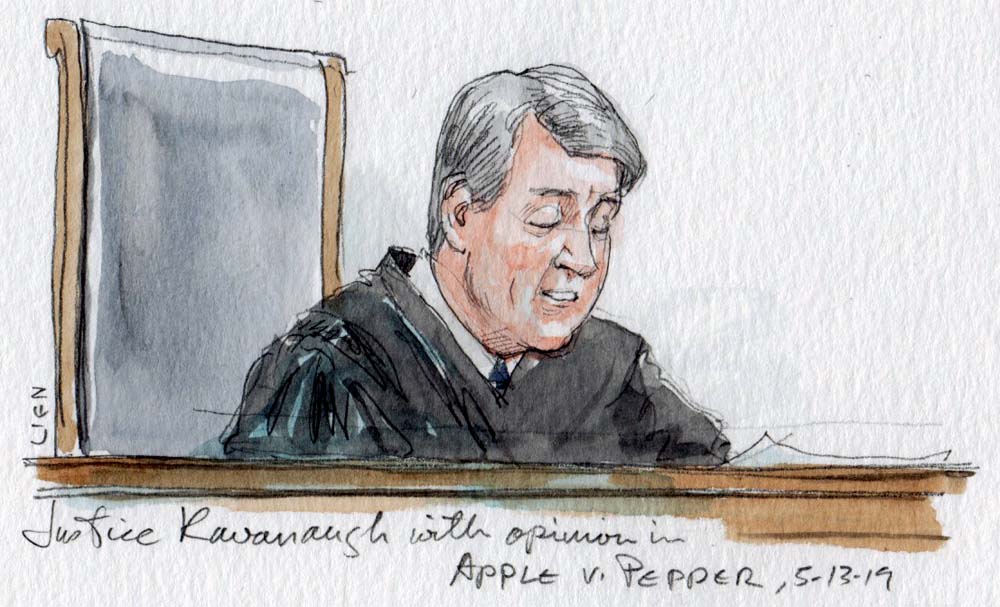 This morning a divided Supreme Court handed a major victory to the plaintiffs in a massive antitrust lawsuit against technology giant Apple. By a vote of 5-4, the justices allowed the lawsuit, brought by a group of iPhone users who allege that Apple is violating federal laws by requiring them to buy apps exclusively from Apple’s App Store, to go forward. In an opinion by its newest justice, Brett Kavanaugh, the court rejected Apple’s argument that the lawsuit should be shut down because the company was selling the apps at prices set by the app developers, so that the iPhone users’ claims were prohibited under the Supreme Court’s antitrust cases. 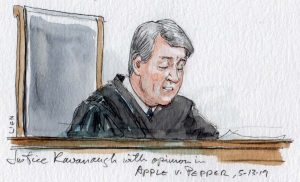 Today’s decision was the latest chapter in a dispute that dates back several years. It began when the iPhone users filed their lawsuit in a federal trial court in California, which threw the case out. The lower court relied on a 1977 case called Illinois Brick Co. v. Illinois, in which the Supreme Court ruled that triple damages for violations of federal antitrust laws are not available to an “indirect purchaser” — a plaintiff whose claim isn’t that he was personally overcharged, but instead that the defendant overcharged someone else, who passed the extra charge on to the plaintiff. In the trial court’s view, that’s exactly what happened here: App developers paid Apple a 30 percent commission and then passed that 30 percent mark-up on to the iPhone users, which meant that the iPhone users were not direct purchasers from Apple.

On appeal, the U.S. Court of Appeals for the 9th Circuit reversed and reinstated the iPhone users’ lawsuit. The court of appeals regarded the case as much simpler: In its view, Apple is a distributor which sells the apps to iPhone users directly through its App Store. Today a majority of the justices agreed.

The Supreme Court’s decision in Illinois Brick, Kavanaugh explained, “established a bright-line rule that authorizes suits by direct purchasers but bars suits by indirect purchasers.” Here, it was clear to Kavanaugh (as well as to Justices Ruth Bader Ginsburg, Stephen Breyer, Sonia Sotomayor and Elena Kagan, who joined his opinion) that the iPhone users were direct purchasers from Apple and therefore could bring an antitrust lawsuit against the company, because they “bought the apps directly from Apple.”

Kavanaugh’s opinion for the court rejected Apple’s argument that the iPhone users could not bring their lawsuit because the app developers, rather than the company, set the retail prices that the iPhone users ultimately paid. First, the opinion stressed, such a theory is inconsistent with both the text of federal antitrust laws – which allow “any person” who has been “injured” by an antitrust violator to bring a lawsuit – and with Illinois Brick’s “bright line” between direct and indirect purchasers. Second, the majority explained, if a retailer is violating antitrust laws and consumers are paying higher prices as a result, the consumers’ ability to bring a lawsuit shouldn’t hinge on how the retailer has set up its relationships with suppliers. Third, the majority reasoned, “Apple’s theory would provide a roadmap” for it and other companies to set up their relationships to “evade antitrust claims by consumers and thereby thwart effective antitrust enforcement.”

The majority acknowledged that, as Apple had suggested, it might be hard to calculate the damages that iPhone users have suffered if they ultimately prevail. But, Kavanaugh wrote, that is “hardly unusual in antitrust cases” and certainly not a reason to squelch such lawsuits altogether: “Illinois Brick is not a get-out-of-court free card for monopolistic retailers to play any time that a damages calculation might be complicated.” Nor did the prospect that app developers could also sue Apple, seeking to recover the profits that they might have earned in a competitive retail market, weigh against allowing the iPhone users’ lawsuit to go forward, because “the two suits would rely on  fundamentally different theories of harm and would not assert dueling claims to a common fund.”

Justice Neil Gorsuch dissented from the ruling, in an opinion joined by Chief Justice John Roberts and Justices Clarence Thomas and Samuel Alito. Gorsuch criticized as overly simplistic what he characterized as the majority’s “revisionist” view of Illinois Brick. The iPhone users’ claims rest “on just the sort of pass-on theory that Illinois Brick forbids,” Gorsuch concluded. But if all that matters is whether the plaintiff transacts directly with the defendant, Gorsuch suggested, then the court’s rule “exalts form over substance,” and Apple will be able to get around the test by restructuring its contracts so that the iPhone users pay the app developers, who in turn pay a commission to Apple. If the court is going to “begin whittling away” Illinois Brick “to a bare formalism,” Gorsuch complained, it should do so after a more thorough airing of the issues, rather than in a case in which even the plaintiffs affirmatively declined to ask the court to overrule its precedent.

Although today’s decision only allows the lawsuit against Apple to go forward, it could ultimately prove quite costly: If Apple is later held liable on the merits, it could have to pay millions of dollars of damages. And other companies that operate similar “electronic marketplaces” could also find themselves the targets of lawsuits in the future.