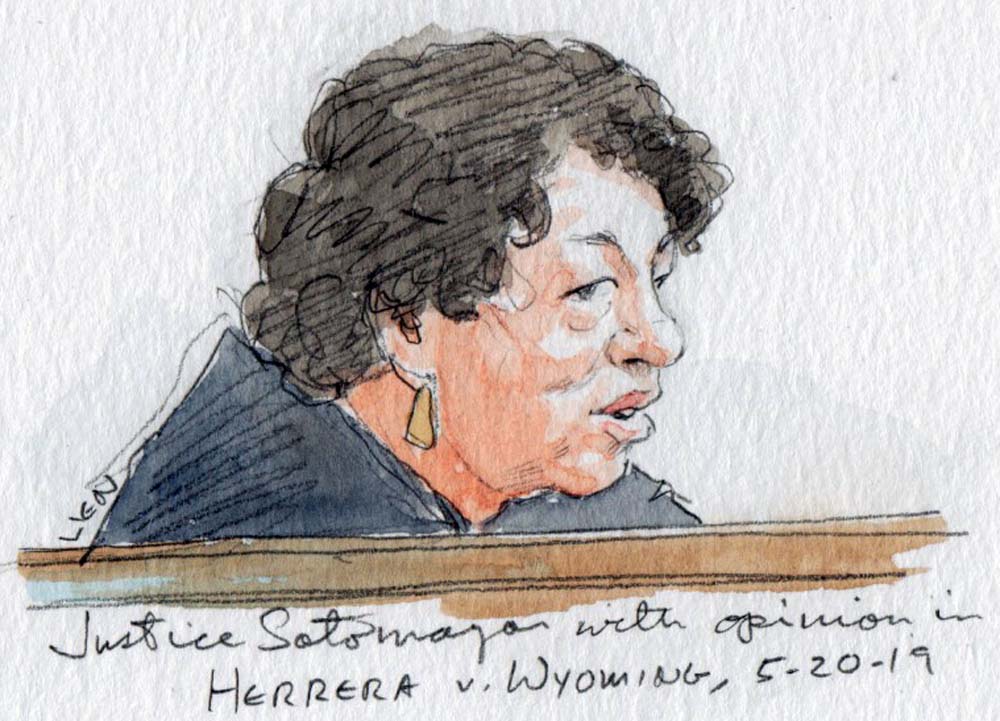 In Herrera v. Wyoming, the Supreme Court today overruled the Wyoming courts and held that the Apsáalooke Nation, also known as the Crow Tribe, retains its treaty-guaranteed right to hunt on unoccupied lands outside its reservation. Although the case turned on complicated questions of precedent and preclusion, the decision is perhaps most significant for what it augurs for future struggles for tribal rights before this court.

Wyoming convicted Clayvin Herrera, a Crow tribal member, for violating state hunting laws, notwithstanding the promise in an 1868 federal treaty that the tribe and its members preserved the right to hunt on “unoccupied” lands. The lower courts had reasoned that an earlier decision of the U.S. Court of Appeals for the 10th Circuit, Crow Tribe of Indians v. Repsis, which held that the tribe’s treaty right was abrogated when Wyoming became a state, precluded Herrera from arguing that the treaty right was still valid. In an opinion by Justice Sonia Sotomayor, the Supreme Court disagreed. 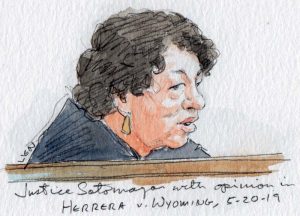 Repsis did not bind Herrera, the court reasoned, because there had been a significant intervening change in the law that barred issue preclusion. Repsis had relied on an 1896 Supreme Court decision, Ward v. Race Horse, which had held an identical treaty hunting provision incompatible with statehood. But after Repsis, the Supreme Court in its 1999 decision Minnesota v. Mille Lacs Band of Chippewa Indians firmly rejected the application of Race Horse in a similar dispute. The court observed today that Mille Lacs had “methodically repudiated” the “logic” of Race Horse. Although Mille Lacs had declined to explicitly overrule Race Horse, today’s decision took that next step: “[W]e make clear today that Race Horse is repudiated to the extent it held that treaty rights can be impliedly extinguished at statehood.”

Without Race Horse or Repsis, the state could not successfully argue that statehood had ended the tribe’s treaty right. The court dismissed the state’s historical argument to the contrary, based on a “potpourri of evidence,” as “severely flawed.”

The court further held that Bighorn National Forest did not become categorically “occupied” when the forest was created, which would have voided the treaty right. The treaty term “unoccupied,” the court stressed, must be interpreted as the Crows understood it, and the court cited historical evidence that, to the Crows, “unoccupied” would have meant “free of residence or settlement by non-Indians.” The court rejected an argument that this issue, too, had been settled in Repsis, noting in a lengthy footnote that the Wyoming courts had not addressed the case’s preclusive effect on the issue and declining to decide it in the “first instance.”

In affirming the tribe’s treaty hunting right, the court stressed that this right is not unlimited. Portions of the national forest may be legally “occupied” under the treaty language, it noted, and Wyoming retains the power to impose nondiscriminatory conservation regulations on tribal treaty rights under well-established precedent.

Four justices dissented. Writing for the minority, Justice Samuel Alito argued that issue preclusion should have prevented the court from interpreting the treaty. After suggesting at length that the relationship between Mille Lacs and Race Horse was “by no means clear,” Alito noted that he “would not decide that question” at all. Rather, accusing the majority of “hairsplitting,” he would have held that Repsis had concluded that the national forest was “occupied,” which would have precluded Herrera from relitigating the validity of the treaty hunting right.

For Clayvin Herrera and other members of the Apsáalooke Nation, whose briefs stressed their reliance on subsistence hunting, the Supreme Court’s decision vindicates a right they believe essential. For Indian country more broadly, the court’s specific reasoning is less significant than its tone. The court’s repeated emphasis that treaty terms must be interpreted “in the sense in which they would naturally be understood by the Indians” reiterates a long-standing Indian law principle that recent Supreme Court decisions have sometimes honored in the breach. Perhaps most notably, Justice Neil Gorsuch’s willingness to break with the other conservative justices and join the court’s more liberal wing — hinted at in earlier Indian law decisions — may signal an emerging coalition in favor of the rights of Native nations.