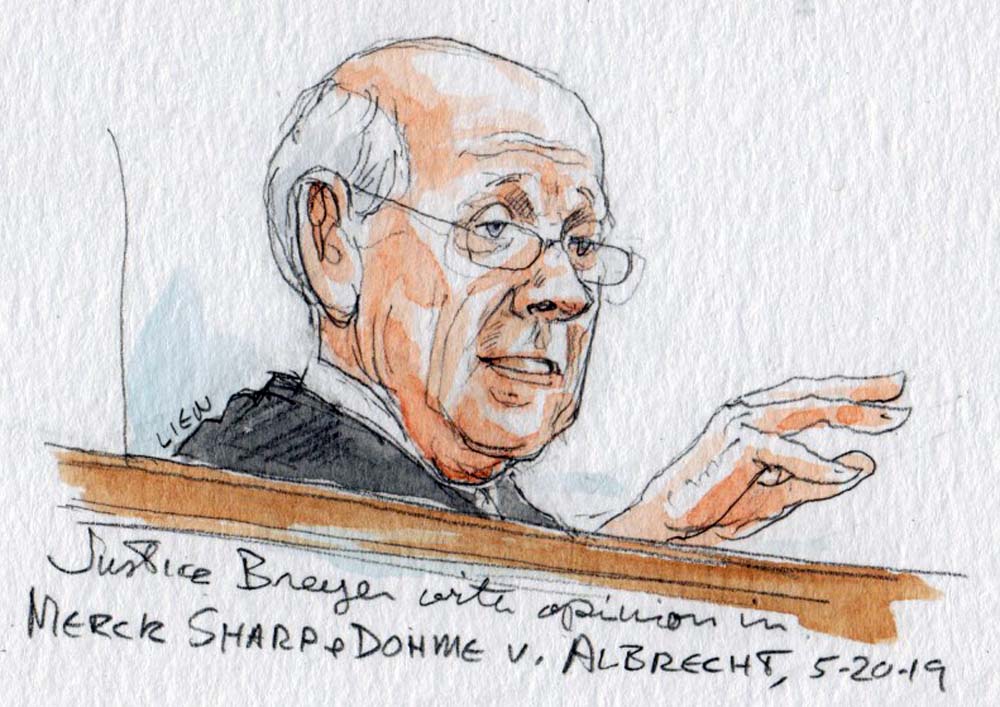 In Merck Sharpe & Dohme v. Albrecht, the Supreme Court yesterday issued the latest in its burgeoning canon of drug pre-emption cases, offering clarity on the procedure for deciding pre-emption defenses, but little additional elucidation on the contours of those defenses. The court first held that judges, rather than juries, should decide whether FDA actions pre-empt state tort suits alleging failure to warn consumers of adverse effects. This is a strategic win for drug manufacturers, clarifying that their go-to defense of “impossibility preemption” – the claim that federal regulation would have prohibited the additional warnings plaintiffs allege state tort law required – can be decided on motions before the case reaches a jury. A decade ago in Wyeth v. Levine, the court held that to succeed with the impossibility pre-emption defense, defendants had to produce “clear evidence” that the FDA would have prohibited an additional warning. Yesterday’s opinion in Albrecht attempted to clarify Wyeth’s application by explaining abstractly that the “clear evidence” standard contemplates an irreconcilable conflict between federal and state law, rather than a heightened standard of evidentiary proof. 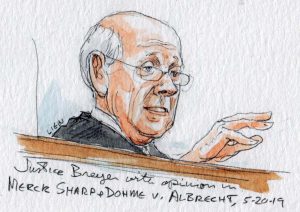 Albrecht came to the Supreme Court from a large multi-district litigation in which thousands of patients alleged that FDA-approved drugs for osteoporosis treatment carried the risk of severe bone breaks called “atypical femoral fractures” that the manufacturers failed to fully disclose in their labeling. The plaintiffs claimed that the failure to warn of these fractures violated state tort law; the defendants argued that the FDA actually rejected or would have rejected their request to add the new warnings and that federal prescription drug regulation therefore pre-empts the state tort claims. The years-long back-and-forth between Merck and the FDA about clinical evidence of these fractures associated with its drug, Fosamax, presented the Supreme Court with a narrow factual and procedural window in which to address wider questions about products liability pre-emption: Who should decide the ultimate impossibility question (judge or jury), and how to determine when simultaneous compliance with state tort law and federal FDA regulation is impossible (what “clear evidence” of impossibility means).

Yesterday, the Supreme Court vacated the 3rd Circuit’s decision. The court unanimously agreed on who should decide (a judge) and what Wyeth’s “clear evidence” standard means (an “irreconcilable conflict,” rather than a standard of proof).

Justice Stephen Breyer’s opinion, joined by five justices, held “that a judge, not the jury, must decide the pre-emption question,” breezily “elaborate[d] Wyeth’s requirements along the way,” and echoed the emphasis on administrative law and deference to FDA expertise that Breyer had raised during oral argument in January. The court categorized the “question of agency disapproval” of additional warnings as a question of law based on its complexity and potentially broad impact. First, administrative agency workings are complex and unfamiliar in ways that require some legal skill to comprehend. Second, to the extent that the FDA memorializes its disapproval in written instruments, those documents are appropriate for construction by judges under Markman v. Westview Instruments and the Administrative Procedure Act. Third, judges are in a better position than juries to assess the statutory and regulatory context for the agency’s action and should, in theory, produce more uniform interpretations – “normally a virtue when a question requires a determination concerning the scope and effect of federal agency action.”

The court further explained that even the kind of “brute factual questions” that inform the judge’s construction of the FDA’s decision, such as whether the manufacturer submitted complete information to the FDA, need not be submitted to a jury. They can be “subsumed within an already tightly circumscribed legal analysis,” as the court recently explained in the patent-construction context in Teva Pharmaceuticals USA Inc. v. Sandoz.

The opinion then heeded the 3rd Circuit’s urging that the Supreme Court help lower courts by clarifying the “clear evidence” standard from Wyeth. “Clear evidence,” the court explained, “is evidence that shows the court that the drug manufacturer fully informed the FDA of the justifications for the warning required by state law and that the FDA, in turn, informed the drug manufacturer that the FDA would not approve a change to the drug’s label to include that warning.” The court rejected the 3rd Circuit’s surmise that “clear evidence” referred to heightened standards of proof. Instead, Wyeth’s clear evidence analysis requires that the judge “simply ask himself or herself whether the relevant federal and state laws ‘irreconcilably conflic[t].’”

The majority opinion broadly defined the “relevant federal law” in this case as “the statutory and regulatory scheme through which the FDA regulates the information that appears on brand-name prescription drug labels,” though even that definition is not as straightforward as it might sound. Later, the majority opinion carefully noted that “the only agency actions that can determine the answer to the pre-emption question, of course, are agency actions taken pursuant to the FDA’s congressionally delegated authority.” Under the current regulatory regime, the FDA may reject manufacturers’ labeling by several methods including the formal “complete response letter” method employed in this case. The majority opinion left scrutiny of the FDA’s method and its legal effect for the lower courts on remand.

Justice Clarence Thomas joined the opinion, but, as he often does in pre-emption cases, wrote separately to reiterate his distinct perspectives on both pre-emption and administrative law. Thomas’ reading of the supremacy clause leads him to the position that federal law has a narrower definition, but a wider pre-emptive reach, than current precedent acknowledges. Thomas’ concurrence espoused a pre-emption doctrine invalidating both state laws that “logically contradict” federal ones, and the narrower category of conflicts that manifest in a “physical impossibility” of compliance. Thomas believes, however, that only the federal statute and those regulations that “necessarily flow” from it are entitled to pre-emptive effect. He would therefore go further than the majority and hold that Merck’s pre-emption defense fails because Merck relies on mere FDA letters as evidence that it could not have added warnings. In Thomas’ lone opinion, the FDA’s response letter “was not a final agency action with the force of law, so it cannot be ‘Law’ with pre-emptive effect.”

Justices Samuel Alito, joined by Chief Justice John Roberts and Justice Brett Kavanaugh, concurred in the judgment and the majority’s classification of impossibility pre-emption as a question of law. Whereas Thomas explained how he would reach an ultimate conclusion of non-pre-emption, Alito used his concurrence to imply that the court of appeals should reach the opposite conclusion. Alito quibbled with the majority’s summaries of FDA law and procedures, preemption precedent after Wyeth, and the facts of the case. Based on these quibbles, he expressed concern about how the 3rd Circuit may apply the “clear evidence” definition on remand, and all but instructed the court of appeals what he would do in its place. In Alito’s view, the FDA was “for years … aware of this [atypical femoral fracture] issue, communicating with drug manufacturers, studying all relevant information, and instructing healthcare professionals and patients alike to continue to use Fosamax as directed.” He stressed as “highly relevant” the FDA’s statutory duty to require label changes when the agency becomes aware that scientific evidence warrants a change. Alito also emphasized the legal arguments made by the solicitor general on the agency’s behalf – namely, the argument that the FDA’s initial decision to accept a label change only to the “Adverse Reactions” section constituted a rejection of the suggestion to change the “Warnings & Precautions” section.

Yesterday’s decision did at least half of what Merck hoped it would: It classified the impossibility-pre-emption issue as a question of law for the judge to determine. This point of procedural clarity has enormous strategic value for products-liability defendants because it confirms that courts may conclusively rule on the pre-emption defense as early as a pre-answer motion, though the factual complexity of FDA communications likely will push the issue in many drug-pre-emption cases to summary judgment. As for how lower courts should rule, the majority opinion did not decide whether this case ultimately represents the pre-emption yin to Wyeth’s no-pre-emption yang. In their concurring opinions, Thomas, Alito, Roberts and Kavanaugh made fairly plain what divergent conclusions they would reach on the ultimate issue. But Breyer’s majority opinion leaves it for the 3rd Circuit to hash out on remand, using the newly announced definition of “clear evidence.” The majority’s opinion also leaves intact the gestalt pre-emption guideposts of the presumption against pre-emption for “the historic police powers of the States” and the consumer-protection motivation of the FDA’s enabling statutes. Overall, Albrecht delegates to the lower courts the task of deciding impossibility pre-emption and offers them only a limited measure of clarity on how to approach that important work.

A surprising stat at this point in the term: Both Kagan and Breyer have been in the majority slightly more often than Alito.

Kavanaugh continues to have the highest rate (as he has for most of the term). Sotomayor has the lowest.

Still 15 cases left. So this could all change.

The first two pieces in our symposium on yesterday's decision in Fulton v. Philadelphia are up. First, @JimOleske dissects the decision in light of the court's shadow-docket ruling in Tandon v. Newsom, which took a very different approach to free exercise.

This article is the first entry in a symposium on the court’s decision in Fulton v. City of Philadelphia. ...

Number of pages written by each justice in the five decisions handed down this week (majority opinions, concurrences, and dissents all included):

While today's decision in Fulton v. Philadelphia is a win for a Catholic group seeking to participate in the city's foster program, it stops short of the broad endorsement of religious freedom the challengers had hoped for. Here's @AHoweBlogger's analysis:

In a clash between religious freedom and public policies that protect LGBTQ people, the Supreme Court ruled Thursday...

Now do we say that Sonia Sotomayor and the other liberals supported child slavery by all voting for Nestle today? Of course not. And Nestle’s lawyers like @Neal_katyal obviously don’t either. The cheap attacks on the court and thoughtful lawyers did not age well. -tg

The claim @nealkatyal was defending slavery is flat wrong & libelous. Here is what he actually said, which is the reverse: child slavery is abhorrent, criminal, horrific. Remember in a pending case he can't comment, so read what he really said in full.

Tired from this morning's momentous opinions? Get ready to do it all again next week -- three times. The court just revealed that next Monday, Wednesday and Friday will all be opinion days.