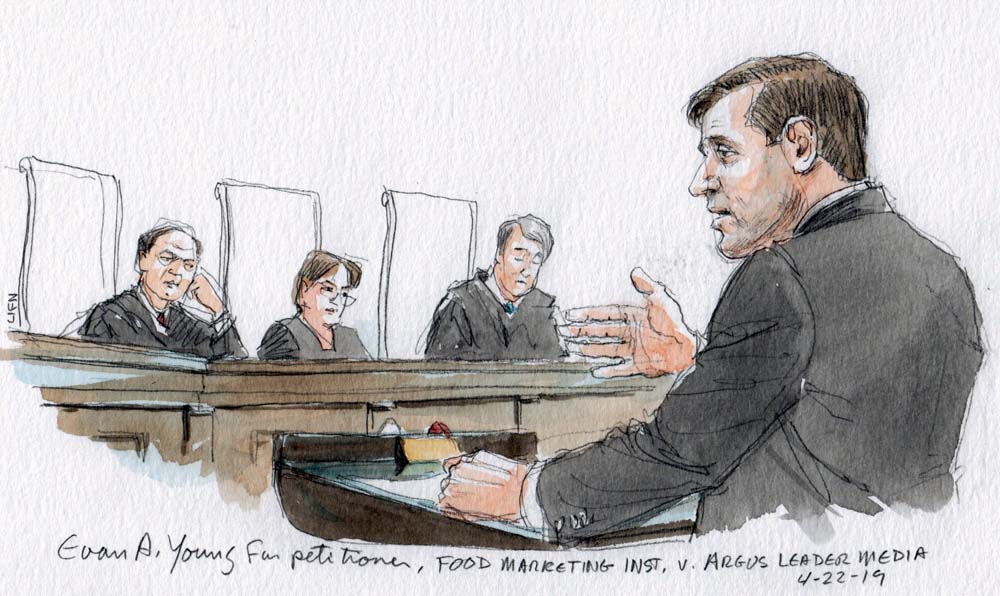 An observer might be excused if she was confused by Monday’s oral argument in Food Marketing Institute v. Argus Leader Media. The case concerns the application of the term “confidential” commercial or financial information in Exemption 4 of the Freedom of Information Act to grocery-store data collected from transactions involving debit cards issued to Supplemental Nutrition Assistance Program benefits recipients. A South Dakota newspaper had requested the data as part of its investigations into the SNAP program. FOIA cases typically inspire at least gestural exhortations about the necessity of an informed public and the danger that excessive governmental disclosure poses to the nation. Instead, the justices first spent a fair amount of time on complex justiciability issues that arose late in the litigation and then focused on dry questions of statutory interpretation. This was in part the product of the factual and procedural issues in this case, but it suggests that the court may follow the lead of 2011’s Milner v. Department of Navy and reverse purpose-driven lower-court interpretations of FOIA in favor of statutory textualism. 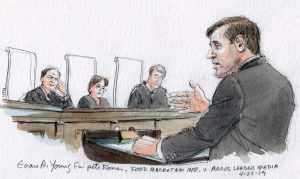 Up first, representing the Food Marketing Institute, which had sought review of the U.S. Court of Appeals for the 8th Circuit’s holding that grocery stores’ SNAP data does not fall within Exemption 4, was Evan Young. He immediately faced tough questions from Justice Sonia Sotomayor about whether his client had standing to challenge the decision. How was FMI’s injury redressable and the appeal therefore justiciable, the justice asked, if the government — the original named defendant below — had decided not to challenge the circuit court’s decision? Even if FMI persuaded the justices to overturn the lower court’s decision, the U.S. Department of Agriculture could nevertheless decide to release the data.

Young’s response, aided by a brief intervention from Chief Justice John Roberts, was to note that USDA now takes the position that it would refuse to release the data unless required to do so by the Supreme Court’s affirmance. This response did not appear to appease Sotomayor, and Justice Stephen Breyer soon echoed her justiciability concerns by suggesting that a recent farm-bill amendment bars disclosure of the SNAP data under 7 U.S.C. § 2018(c), which may render the appeal moot. When Assistant to the Solicitor General Anthony Yang (appearing as amicus in support of FMI) rose to represent the government’s position, nearly the first words out of his mouth were, “The government will not release disputed records … if a FOIA exemption applies. So long as the government is not judicially compelled to do so.” This, he hoped, would settle the justiciability question, because if the government depended on the FOIA exemption to withhold the SNAP data, the controversy would be live and a reversal by the Supreme Court would clearly redress the injury to FMI from disclosure of the data. 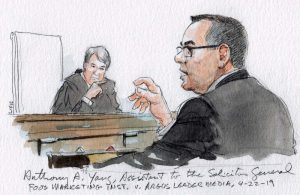 But Sotomayor and Breyer continued to pursue the question of justiciability. In an earlier decision that the government did not appeal, the 8th Circuit held that the pre-amendment version of Section 2018(c) did not bar disclosure of the SNAP data requested by the newspaper. The justices argued that either this earlier decision still applies because neither the government nor FMI appealed it, or the current case has been rendered moot because of Congress’ amendment. In either instance, the justices suggested, the current controversy is not justiciable.

This series of colloquies occupied more than half of FMI’s time, and nearly one-third of the government’s, revealing the complexity of the case’s procedure, facts and applicable law, but appeared to interest only two justices.

It is quite possible that the government’s fairly simple current position will be enough for a majority of the justices to reach the merits. And the merits discussion, by contrast, was far less complex. No justice explicitly supported the standard that the 8th Circuit applied, established first in 1974 by the U.S. Court of Appeals for the District of Columbia Circuit in National Parks & Conservation Association v. Morton, which interprets the term “confidential commercial and financial information” narrowly to exempt only records whose disclosure would “cause substantial harm to the competitive position of the person from whom the information was obtained.” Robert Loeb, representing the Argus Leader newspaper, faced pointed challenges from Justices Elena Kagan and Neil Gorsuch in his effort to defend the National Parks test. Addressing their skepticism about how the 8th Circuit (and many others) can read “confidential” so narrowly, Loeb argued that the common-law use of the term, along with lower courts’ longstanding and widespread acceptance of the National Parks standard, gave a justifiably narrow meaning to “confidential.” Congress’ frequent amendment of FOIA without touching Exemption 4, as well as Congress’ use, in other statutes, of similar language to Exemption 4, demonstrates that the legislature has not merely acquiesced to the term but has ratified it. 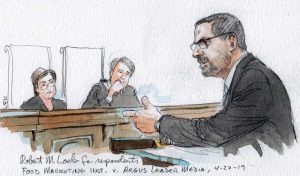 This argument appeared not to persuade the more textualist justices. Kagan asked Loeb why this case is not merely a repeat of Milner v. Department of Navy, in which the Supreme Court reversed the U.S. Court of Appeals for the 9th Circuit’s interpretation of the term “personnel” in Exemption 2. The 9th Circuit’s interpretation — following the interpretation first established by the D.C. Circuit in 1981 — was consistent with how three other lower courts had read the statute. Despite this three-decade old precedent, the Supreme Court overruled the 9th Circuit and held that the plain language of “personnel” required a narrower understanding. Only Breyer dissented from Kagan’s decision in Milner.

Loeb attempted to distinguish Milner from the current case before the court. Unlike in Milner, he argued, nearly every circuit court has adopted National Parks. Congress’ actions in the intervening years in turn demonstrated that it approved of the D.C. Circuit’s narrow interpretation of “confidential.” But Loeb’s efforts did not appear to persuade any of the doubting justices. Gorsuch, in a comment echoed later by Justice Ruth Bader Ginsburg, noted that the other circuits did not apply National Parks in the same manner, suggesting they had in fact not reached a consensus about the meaning of “confidential.” Justices Brett Kavanaugh and Samuel Alito each challenged Loeb’s claim that lower-court consensus and the passage of time could somehow give greater weight to an erroneous interpretation.

In the absence of support for the 8th Circuit’s approach and National Parks, some of the justices gave thought to an appropriate test for a broader meaning of “confidential.” FMI and the government offered a two-prong approach that looked to a private entity’s protection of records it submits and an agency’s representation of how it would handle them. On behalf of FMI, Young proposed that the court consider the private entity’s efforts to keep secret the proprietary information it shares with the government, as well as the entity’s efforts to communicate that information in confidence. Yang for the government proposed that the court review the “assurances” that an agency provides to private entities that it will keep confidential the records it collects. If the court adopts some version of their suggestions to consider both private efforts and government assurances, it would move all Exemption 4 cases closer to the D.C. Circuit’s 1992 approach in Critical Mass Energy Project v. Nuclear Regulatory Commission. The Critical Mass test, which unlike National Parks does not consider the likelihood of competitive harm, currently applies only to information that is voluntarily provided to the government. The information in this case was collected as part of the SNAP program; applying the Critical Mass test here would expand the test’s application to cover all confidential commercial or financial information the government collects. A more expansive test would likely allow FMI to prevail here, because at trial the grocery stores showed that they keep the SNAP data private and that they have received assurances of confidentiality from USDA but could not show substantial competitive harm from the data’s disclosure.

FOIA’s purpose of forcing government disclosure barely arose at oral argument. Early in Young’s time at the podium, Ginsburg complained that Congress was clearly concerned about government officials who did not want to disclose records, perhaps because their agency had been captured by private interests. “To say the government can control this by making a promise that it won’t disclose [records],” she protested, “seems to run counter to the whole idea of FOIA.” If the justices take a textualist approach to this case, as the oral argument seemed to suggest a majority will, such concerns will not carry the day. It would then be up to Congress to amend Exemption 4 with a narrower term or definition of “confidential.”