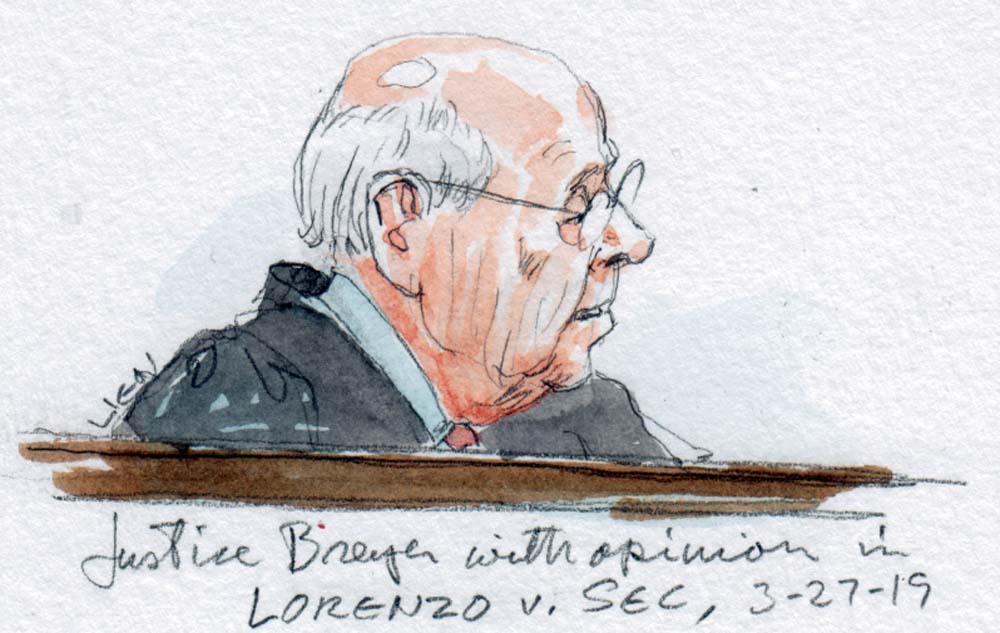 This morning’s decision in Lorenzo v. Securities and Exchange Commission brings no surprises, as the court’s holding follows the views apparent at the oral argument (discussed in my earlier post). Specifically, Justice Stephen Breyer’s opinion for six justices holds that defendant Francis Lorenzo is liable for participating in an unlawful scheme to defraud by distributing false statements written by his supervisor, even though the supervisor’s role protected Lorenzo from any liability for “making” the statements himself. 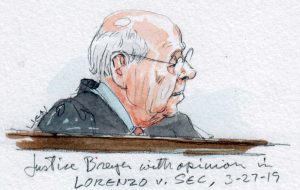 Although the case affects several related provisions of the securities laws, its principal application is Rule 10b-5 of the Securities and Exchange Commission. That rule has three subsections, and this case involves the distinction between the second subsection and the first and third subsections. On the one hand, subsection (b) specifically proscribes “mak[ing] any untrue statement of a material fact”; on the other, subsections (a) and (c) more generally proscribe “employ[ing] any device, scheme, or artifice to defraud” and “engag[ing] in any act, practice, or course of business which operates … as a fraud or deceit.” With regard to subsection (b), we know from the Supreme Court’s 2011 decision in Janus Capital v First Derivative Traders that only the “maker” of the statement is liable for its falsity. Here, where Lorenzo is not responsible as the “maker” of false statements drafted by his supervisor, the question arises whether he still can be held responsible for fraud under the more general provisions of subsections (a) and (c) because he sent those statements in personal emails to his individual customers.

A majority of the justices (including all four of the dissenters from the 5-4 decision in Janus) hold that Lorenzo is liable. As you would have expected from the argument, Breyer’s central point is a plain-language move: “It would seem obvious that the words in [the more general provisions], are, as ordinarily used, sufficiently broad to include within their scope the dissemination of false or misleading information with the intent to defraud.” Indeed, for the majority, “it is difficult to see how … sending emails [Lorenzo] understood to contain material untruths … could escape the reach of those provisions.” Breyer “strengthens this conclusion” by reciting dictionary definitions suggesting that the provisions should “capture a wide range of conduct,” readily including any “artful stratagem.” Acknowledging the possibility of “borderline cases,” the majority could “see nothing borderline about … disseminating false or misleading information to prospective investors with the intent to defraud.”

I expect that the most important part of the opinion will be subpart II(C), the section that rejects Lorenzo’s argument that “the only way to be liable for false statements is through those provisions that refer specifically to false statements.” The majority firmly rejects the “premise … that each of th[e] provisions [of Rule 10b-5] should be read as governing different, mutually exclusive, spheres of conduct.” Rather, Breyer recalls the Supreme Court’s characterization of the securities law as a “first experiment in federal regulation of the securities industry,” and notes that the Supreme Court often has thought it best to treat the statute as “includ[ing] both a general proscription against fraudulent … practices and, out of an abundance of caution, a specific proscription against nondisclosure.” The best example of overlap, Breyer explains, is in subsections (a) and (c): “It should go without saying that at least some conduct amounts to ‘employ[ing]’ a ‘device, scheme, or artifice to defraud’ under subsection (a) as well as ‘engag[ing] in a[n] act … which operates … as a fraud’ under subsection (c).”

The court plainly is motivated by the sense that accepting Lorenzo’s view would mean that “behavior [like Lorenzo’s], though plainly fraudulent, might otherwise fall outside the scope of the rule.” For Breyer, “using false representations to induce the purchase of securities would seem a paradigmatic example of securities fraud. We do not know why Congress or the Commission would have wanted to disarm enforcement in this way.”

Finally, Breyer considers the argument of Justice Clarence Thomas (joined by Justice Neil Gorsuch in dissent) that the decision renders Janus a “dead letter.” The majority (which includes Chief Justice John Roberts and Justice Samuel Alito, two of the three remaining members of the Janus majority) develops a timeline of drafting, issuing and disseminating false statements. In that conception, Janus held that an individual did not “make” statements under subsection (b) if the individual “helped draft misstatements issued by a different entity that controlled the statements’ content.” That case “said nothing about … the dissemination of false” statements, and thus “would remain relevant (and preclude liability) where an individual neither makes nor disseminates false information.”

As I suggested above, this outcome cannot really surprise observers of the oral argument, which centered on Lorenzo’s dissemination of information that he knew to be false for the purpose of inducing investors to make bad investments. That activity evidently struck a majority of the justices as reprehensibly fraudulent conduct of the kind that should be at the center of securities enforcement efforts. Because most of the justices appeared to see this as a case of core enforcement rather than a stretch, a straightforward decision imposing liability seemed inevitable. It remains to be seen whether the court’s paean to a broad interpretation of securities liability will spur more creative action by the SEC in the years to come.