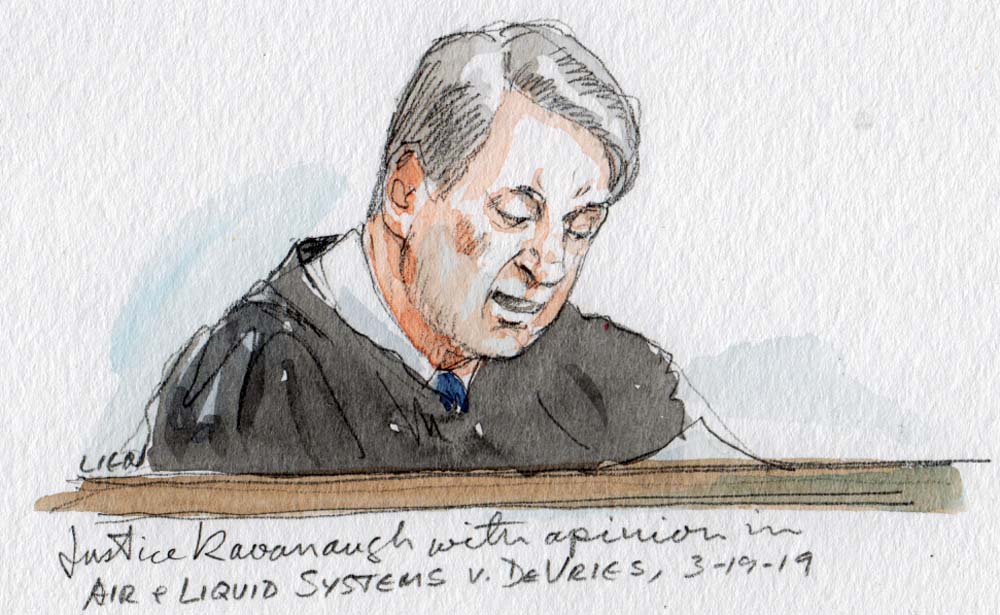 This morning’s 6-3 opinion in Air and Liquid Systems Corp. v. DeVries affirms the decision of the lower court holding that the manufacturers of asbestos-dependent equipment used on Navy ships can be held liable to sailors who became ill because of their contact with the asbestos.

Because the case involves liability for conduct at sea, the dispute arises under the “maritime law,” a type of federal common law for which the U.S. Supreme Court is the final authority. In the same way that the New York Court of Appeals is the final authority for the law of negligence in accidents that occur in New York, the U.S. Supreme Court sets the rules for tort liability when the injury occurs at sea. 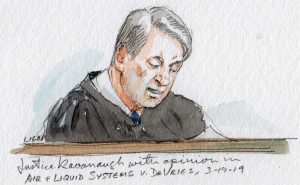 The trial court adopted a “bare-metal” defense, under which manufacturers cannot be liable for injuries from equipment (the asbestos insulation) that they did not make, sell or distribute. The court of appeals, by contrast, held that the manufacturers were liable if the harms from application of the asbestos were foreseeable. The Supreme Court, in an opinion by Justice Brett Kavanaugh, adopts a middle standard, under which the manufactures are liable if the product required incorporation of a part (the asbestos) and the manufacturer had reason to know that the integrated product would be dangerous for its intended uses.

The opinion proceeds by explaining the flaws in the two alternate approaches that persuade the Supreme Court to adopt the “required-incorporation” standard. On the one hand, the opinion expresses “agree[ment] with the manufacturers that a rule of mere foreseeability would sweep too broadly.” Kavanaugh notes that products “can foreseeably be used in numerous ways with numerous other products and parts,” and suggests that “[r]equiring a product manufacturer to imagine and warn about all of those possible uses … would impose a difficult and costly burden on manufacturers.”

Conversely, Kavanaugh also rejects the proposed “bare-metal” defense. As he explains, few quarrel with the rule of the “Restatement of Torts” that a manufacturer has a duty to warn if it “‘knows or has reason to know’ that the product ‘is or is likely to be dangerous for the use for which it is supplied.’” For the majority, there is “no persuasive reason to distinguish” that situation from the situation at hand, “when the manufacturer’s product requires incorporation of a part that the manufacturer knows or has reason to know is likely to make the integrated product dangerous for its intended uses.”

Kavanaugh also rejects the manufacturers’ argument that warning by manufacturers will be counterproductive and impractical, first by referring to economic literature suggesting that “the product manufacturer will often be in a better position [to warn] than the parts manufacturer,” and second by scoffing at the suggestion that the warning requirement will “meaningfully add” to existing disclosure obligations. Finally, Kavanaugh notes the court’s longstanding “longstanding solicitude for sailors” and suggests that the maritime context – in which the plaintiffs are “families of veterans who served in the U.S. Navy” – makes liability “especially appropriate.”

The court divides sharply on the question, with Justice Neil Gorsuch (joined by Justices Clarence Thomas and Samuel Alito) dissenting. In general, the dissenters believe that the court’s “required-incorporation” standard is lacking in “meaningful roots in the common law” and also too vague for predictable application. For that group, the bare-metal defense adopted by the district court provides a better answer.