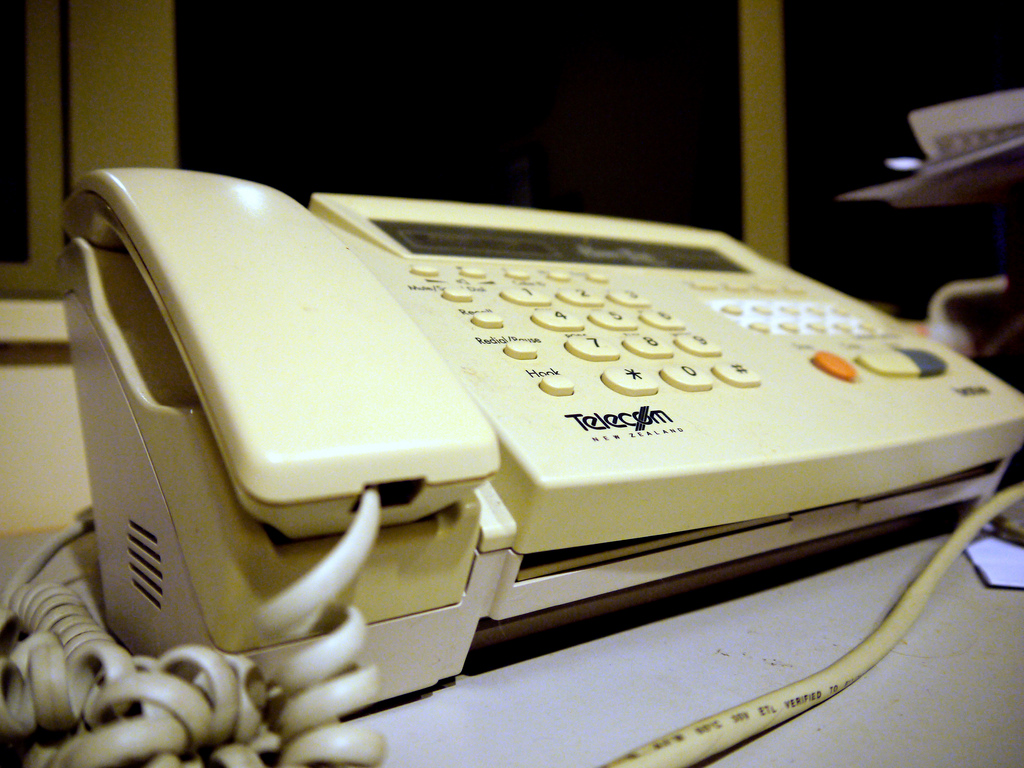 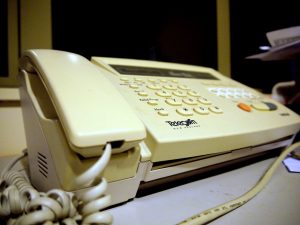 Did you know you can sue if you receive an unsolicited ad by fax? Under the Telephone Consumer Protection Act of 1991, you can recover $500 per offending fax. If sent willfully or knowingly, make that $1,500. Next Monday, the Supreme Court will grapple with this statute when it hears argument in PDR Network v. Carlton & Harris Chiropractic.

In 2013, the publisher of the Physicians’ Desk Reference sent a fax to healthcare professionals to announce the launch of a digital version of the PDR. The PDR is a compilation of manufacturers’ prescribing information on prescription drugs, which is available free of charge to healthcare professionals. The fax shouted this information in the subject line: “FREE 2014 Physicians’ Desk Reference eBook—Reserve Now.”

Carlton & Harris Chiropractic was not thrilled to receive this fax. So it filed a putative class action against PDR Network, seeking monetary damages under the TCPA. This lawsuit, at first blush, seems to present an ordinary, yet fun, dispute about statutory interpretation: Does this fax encouraging doctors to reserve a free copy of the PDR constitute an “unsolicited advertisement” under the TCPA?

The TCPA defines “unsolicited advertisement” as “any material advertising the commercial availability or quality of any property, goods, or services which is transmitted to any person without that person’s prior express invitation or permission, in writing or otherwise.” In dismissing the complaint, the district court concluded that the PDR fax did not fit the statutory definition. The PDR is neither bought nor sold. The publisher does not sell any of the drugs detailed in the free reference book. The ad thus lacks a “commercial aim,” which the court interpreted the TCPA to require.

Not so fast, responded the U.S. Court of Appeals for the 4th Circuit. This is not a run-of-the-mill statutory interpretation case. It’s about administrative law. It turns out that, in 2006, the Federal Communications Commission issued an order interpreting “unsolicited advertisement” in the TCPA to include “facsimile messages that promote goods or services even at no cost, such as free magazine subscriptions, catalogs, or free consultations or seminars.” At second blush, then, maybe this case just implicates the familiar Chevron two-step dance, in which the court first assesses whether the TCPA statutory definition is ambiguous and, if so, then defers to the FCC’s interpretation so long as it’s reasonable. Some Supreme Court counsel and justices have been “hating on Chevron” of late. Perhaps this case would mark just another “milestone on Chevron’s path toward irrelevance.”

But this case isn’t even about Chevron deference or any other doctrine you’d ordinarily cover in an introductory administrative law course. Instead, it turns out that the Hobbs Act governs judicial review of agency orders interpreting the TCPA. The Hobbs Act requires an aggrieved party to seek judicial review of the agency’s final order within 60 days of its entry in the appropriate circuit court of appeals, and vests that circuit court with “exclusive jurisdiction to make and enter … a judgment determining the validity of, and enjoining, setting aside, or suspending, in whole or in part, the order of the agency.”

A divided 4th Circuit held that the district court had erred in interpreting the TCPA, as opposed to just applying the FCC’s 2006 order. That is because the Hobbs Act stripped the district court of jurisdiction to revisit the FCC’s 2006 interpretation of the TCPA. The challenge was in the wrong court and more than a decade too late. The 4th Circuit then concluded that the PDR fax is an “unsolicited advertisement” under the FCC order because it “promote[s] goods or services even at no cost.”

The Supreme Court granted cert. It limited review to whether the Hobbs Act requires the district court to accept the FCC’s legal interpretation of the TCPA.

In its merits brief, PDR Network advances two main arguments. First, the Hobbs Act does not limit the district court’s power to interpret the TCPA in enforcement suits between private parties. That is because under the Administrative Procedure Act, a defendant generally may challenge an agency action in a judicial enforcement proceeding, and the Hobbs Act only addresses suits that seek equitable or declaratory relief against the federal agency itself. If there were any doubt, administrative law’s presumption of reviewability counsels in favor of construing the Hobbs Act narrowly, as does the doctrine of constitutional avoidance. Second, and in the alternative, the FCC’s 2006 order is an interpretative rule, not a legislative rule, and thus under ordinary administrative law principles it should not bind the district court.

In response, Carlton & Harris Chiropractic argues that the Hobbs Act makes no exception for challenging the FCC’s 2006 order outside of the 60-day period (and outside of a circuit court’s exclusive jurisdiction to “determine the validity of” the agency’s order). Instead, a district court in a subsequent enforcement proceeding must apply the agency’s statutory interpretation, even if it conflicts with the statute itself. Carlton & Harris Chiropractic also argues that PDR Network never raised many of its arguments in the proceedings below, including any challenge to the validity of the FCC’s 2006 order, to the APA or constitutional adequacy of the Hobbs Act procedures, to the constitutional separation of powers, or to the nature of the order as an interpretative as opposed to legislative rule. In any event, it argues, these arguments are meritless. (PDR Network offers some responses in its reply brief.)

The United States, which will participate at argument, sides with the 4th Circuit. The solicitor general argues that the Hobbs Act unambiguously “provides the exclusive procedure through which courts may decide whether a covered order is legally sound, and forecloses courts from making such determinations in civil litigation between private parties.” History, the Supreme Court’s prior precedents, and every circuit-court decision on point reinforce the statute’s plain meaning. PDR Network’s contrary interpretation “would undermine the interests of the United States and regulated parties in conclusively determining the validity of covered agency actions.” Neither the APA nor the Constitution, the solicitor general contends, imposes any barrier to this plain reading of the Hobbs Act. And PDR Network’s forfeited, novel attempt to distinguish between interpretative and legislative rules fails because the Hobbs Act covers all final orders of the FCC (outside of the licensing context).

A number of other amici curiae have also weighed in. On the one hand, a half-dozen (red) states and several local government associations support PDR Network, emphasizing the serious costs of the 4th Circuit’s approach to state and local governments. By contrast, the Electronic Privacy Information Center and the American Bankers Association and related associations support Carlton & Harris Chiropractic, underscoring the importance of the Hobbs Act’s exclusive review to help ensure regulatory certainty and to protect consumers.

The U.S. Chamber of Commerce purports to support neither party. It advocates for “a robust application of the Hobbs Act that channels judicial review and limits collateral attacks” to promote regulatory certainty and national uniformity. Yet it also supports a due process right for private defendants to challenge “the reach and basis of [agency] rules” in enforcement proceedings brought by the agency or another private party. In other words, it ultimately seems to support PDR Network.

If these briefs provide the roadmap, the oral argument will likely pit the strong textualist arguments the solicitor general has marshaled to defend a broad reading of the Hobbs Act against PDR Network’s contentions concerning the APA, the Constitution, and ordinary administrative-law principles like the presumption of reviewability. Both sides argue their position is ordinary. Yet both seem quite extraordinary. The solicitor general’s position would result in requiring district courts to apply agency statutory interpretations that may flatly contradict the statutory text—a type of absolute deference that would make even Chevron’s biggest fans blush. PDR Network’s argument, by contrast, apparently would run contrary to every relevant circuit-court decision to date and against the most natural reading of the Hobbs Act.

There is one potential wrinkle. Aditya Bamzai, of Ortiz v. United States fame, returns to the court as a law-professor amicus. Bamzai argues that the Hobbs Act does not bar the district court from interpreting the TCPA contrary to the FCC’s 2006 order. But his approach seems less extraordinary. Bamzai explains that the Hobbs Act is better understood as a jurisdiction-splitting, not jurisdiction-stripping, statute: Circuit courts have exclusive jurisdiction to consider certain statutorily specified actions within the 60-day timeframe. District courts, in subsequent enforcement proceedings, are left with the authority to take any other action not specified in the Hobbs Act.

Tracing the historical origins of the Hobbs Act’s use of “determine the validity of,” Bamzai concludes that district courts retain the authority to interpret statutes when an agency’s statutory interpretation is not necessarily an element of a crime or civil cause of action. I cannot do justice to his argument in this short argument preview, so definitely go read the full brief here. And my co-blogger Bernard Bell has even more along similar lines over at the Yale Journal on Regulation blog here.

I hope after argument we will have a better sense whether the Supreme Court will approach the Hobbs Act as ordinary or extraordinary administrative law.