A “view” from the courtroom: From the Federal Register to the Stanley Cup 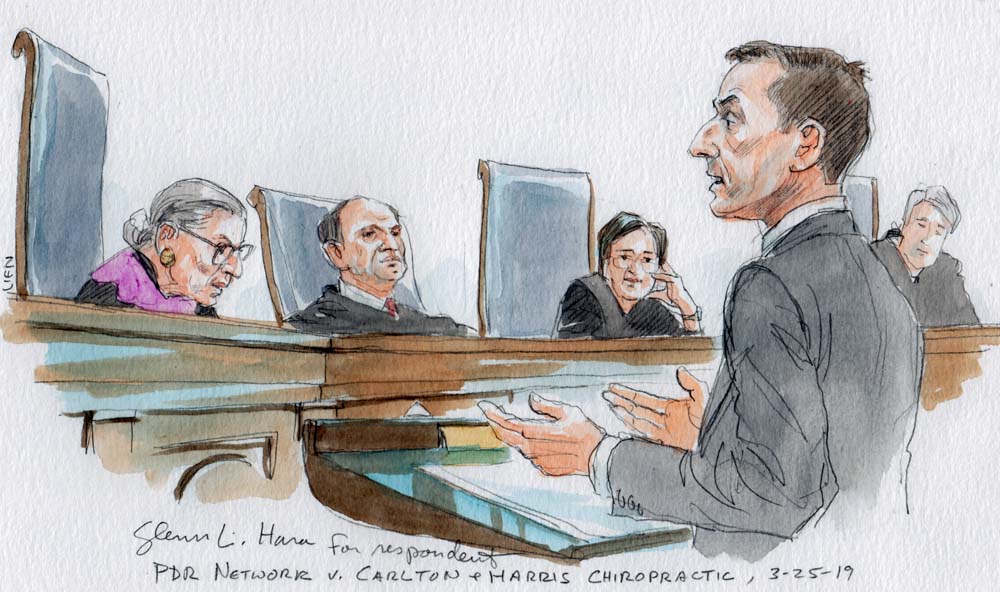 Today the Supreme Court will hear arguments in two cases, including one in which the justices will have some fun with the Federal Register, the dry, daily publication that lists proposed and final regulations. After arguments, the justices will move immediately to their private conference room, not to discuss cases but to spend a few minutes with the Stanley Cup, the venerable trophy for professional hockey. 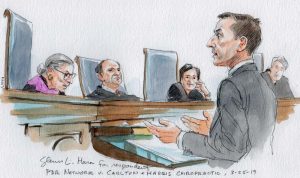 This is a big week for partisan gerrymandering, with the court taking up two cases on the topic on Tuesday. But it is also a big week for administrative law.

On Wednesday, the court takes up Kisor v. Wilkie, about whether the justices should overrule two precedents that call for courts to defer to federal agencies’ interpretations of their own regulations.

Today’s first case for argument centers on a federal agency’s interpretation of a statute. In PDR Network, LLC v. Carlton & Harris Chiropractic Inc., the court will decide whether the Hobbs Act required a federal district court in this case to accept the Federal Communication Commission’s interpretation of the Telephone Consumer Protection Act. The latter statute prohibits any “telephone facsimile machine” from sending an unsolicited advertisement to another fax machine.

Although the court has been addressing key questions raised by technology and the information age in recent years, some cases that come along seem to be relics from an earlier era. During the February sitting, the justices heard a case about an invention to speed the rerouting of returned bulk mail and another about public-access cable channels.

But companies are still sending junk snail mail, cable systems are still reserving channels for public-access shows (about, say, the best hot dogs in New York City, as Justice Stephen Breyer suggested in a hypothetical during arguments in Manhattan Community Access Corp. v. Halleck), and fax machines are evidently in wider use than one might presume. The Washington Post reported this month that faxes have persevered for several reasons, including that it is harder to intercept fax messages than unencrypted emails.

One area in which fax machines remain popular is in health care, the Post noted. The PDR Network case involves unsolicited faxes sent by the publisher of the “Physicians’ Desk Reference,” a compendium of prescribing information for prescription drugs.

In 2013, PDR Network sent a one-page fax to health-care professionals announcing the new digital version of the book. Carlton & Harris Chiropractic sued under the TCPA on behalf of a putative class, alleging that the fax was an unsolicited advertisement barred by the law. The statute carries some stiff penalties: $500 per violation, which may be tripled if the violation was made “willfully or knowingly.”

The FCC in 2006 issued an order that interpreted “unsolicited advertisement” to include fax messages that promote goods or services at no cost,” such as free catalogs or magazine subscriptions. But the FCC’s order also said that faxes that only contained information, such as news articles or legislative updates, did not violate the TPCA.

A federal district court granted PDR Network’s motion to dismiss the suit, relying primarily on the text of the TCPA, because the fax in question did not have a commercial aim. But the U.S. Court of Appeals for the 4th Circuit reversed, holding that under the Hobbs Act, a 1946 law that establishes judicial review for the final orders of certain federal agencies, the district court should have relied on the FCC’s interpretation of the TCPA. The appeals court held that under that interpretation, the PDR Network’s fax violated the TCPA.

The Supreme Court granted review on the question of whether the Hobbs Act required the district court to accept the FCC’s legal interpretation.

As part of this complicated question, the argument veers to the issue of whether PDR Network or any other party may challenge an FCC interpretation from 2006 when it presumably was not violating the TCPA at that time.

“The notice of rule-making was published in the Federal Register,” says Glenn Hara, the lawyer representing the chiropractic practice. “And that constitutes constructive notice to the whole world.”

Justice Neil Gorsuch hypothesizes about a federal rule that “all persons named Bob” must pay the federal government $100 a year. “And a young man is born after the regulation was adopted, and he didn’t read the Federal Register.”

Maybe a lot of people don’t read it, Gorsuch continues, not least because “maybe they can’t read it. It’s in eight-point type.”

Young Bob could petition the relevant agency, Hara says, though he agrees that Bob might be barred from raising a challenge to the regulation in federal district court.

Justice Samuel Alito asks about a World War II-era decision in which the justices upheld a law that stripped federal courts of jurisdiction to consider the validity of a wartime price regulation when raised as a defense to a prosecution. He hypothesizes about a new federal agency that sets prices for homegrown tomatoes.

“And somebody raises heirloom tomatoes in the backyard and charges more than the specified price,” Alito says. Would that person be barred from challenging the regulation in a prosecution?

“But you think that would be consistent with due process?” Alito says. “You would say to the person who was growing these tomatoes in the backyard, well, you know, you should have kept up with the Federal Register.”

Alito is not done with the wonky publication. “Do you know how many pages were issued in the Federal Register in 2018?” he asks. Hara does not, but Alito does. “I think it is something like 90,000 pages,” the justice says.

“I once saw somebody riding home on the Metro at midnight in Washington, D.C., reading the Code of Federal Regulations,” Alito continues. “And I thought: Only in Washington, D.C., could you see this sight. But you think people out in other parts of the country are waiting for the latest addition to the Code of Federal Regulations?”

I am thinking that I may have been the person Alito saw on the subway. I was once in a position that required close attention to the Federal Register. In fact, I was once assigned to cover a party to celebrate the 70th anniversary of the publication, in 2006.

The Federal Register was launched in 1934 amid the blizzard of regulations emanating from New Deal-era legislation. The anniversary celebration was thrown by the National Archives and Records Administration, which compiles the publication, and the Government Printing Office, which, uh, prints the daily booklet full of dense text on newsprint paper. (The register has been available online since 1994.)

The party was so wild that people are still talking about it. It was held at 9 a.m. on a Tuesday at the GPO’s headquarters. There was a cake decorated with a frosting rendition of the first issue and the most recent issue of the Register. Then-U.S. Solicitor General Paul Clement was one of the featured speakers, citing the “disorder and chaos” that reigned in administrative law before the publication’s birth because of a lack of a written repository of federal rules and regulations.

After the argument in PDR Network, the justices move on to The Dutra Group v. Batterton, about punitive damages under maritime law.

As soon as they leave the bench, they proceed to their private conference room for a few minutes with the Stanley Cup, which is evidently in town because the Washington Capitals, the reigning champions of the National Hockey League, are visiting the White House today. (Or at least some of them are.)

The Public Information Office reports that all nine justices, along with retired Justice Anthony Kennedy, attended the session, which included NHL Commissioner Gary Bettman and other league officials. The session came about at the invitation of Chief Justice John Roberts, a hockey fan who has invited Justice Elena Kagan to a game on more than one occasion.

Supreme Court employees were to have their own chance later Monday to see the trophy in one of the building’s other conference rooms. The Capitals will begin their defense of the Stanley Cup next month, but we are just a few days from the start of the season for the sport that several justices really care about. Opening Day for Major League Baseball is Wednesday, with the Washington Nationals’ home opener on Thursday.

Recommended Citation: Mark Walsh, A “view” from the courtroom: From the Federal Register to the Stanley Cup, SCOTUSblog (Mar. 25, 2019, 5:23 PM), https://www.scotusblog.com/2019/03/a-view-from-the-courtroom-from-the-federal-register-to-the-stanley-cup/