Argument analysis: No clear resolution on whether First Amendment applies to public-access channels 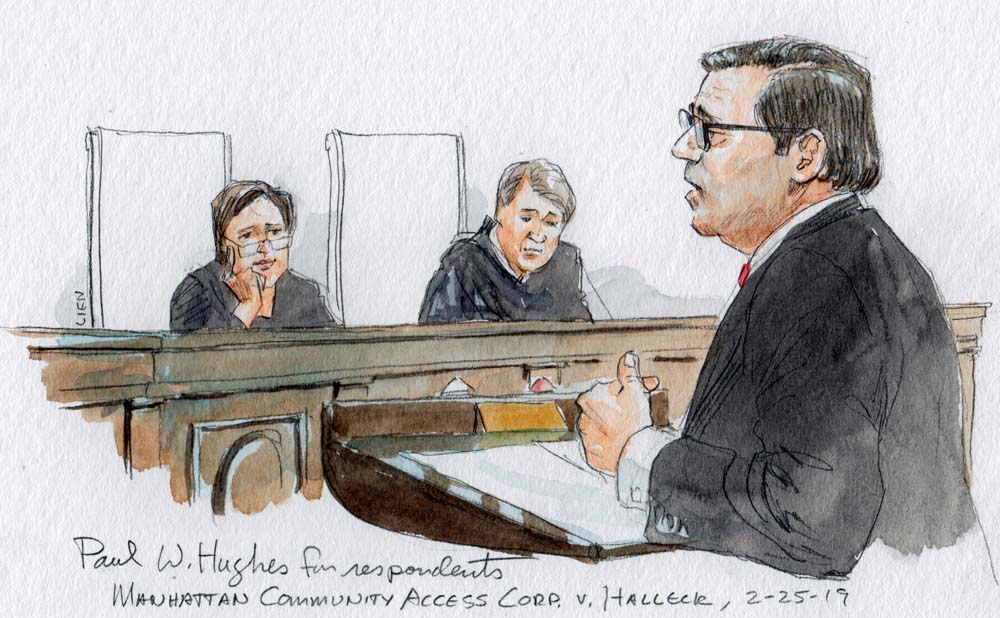 The Supreme Court heard oral argument today in a case involving whether a private nonprofit corporation that runs a public-access TV channel is a “state actor,” who can be sued for violations of the First Amendment. After roughly an hour of debate, there was no clear winner in the case: The justices who spoke appeared to be divided, and two justices – Clarence Thomas and Neil Gorsuch – asked no questions at all.

The events leading up to today’s case began back in 2012, when DeeDee Halleck, an award-winning public-access producer, and Jesus Melendez, a poet and playwright, made a 25-minute video that was critical of Manhattan Community Access Corporation, known as “MNN,” which operates the public-access TV channels in Manhattan. MNN aired the video once but then banned it from the air, pointing to what it described as threatening language from Melendez in the video. Halleck was prohibited from submitting content to MNN for a year, while Melendez was banned from MNN for life. 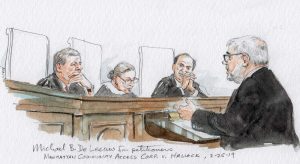 The U.S. Court of Appeals for the 2nd Circuit agreed with Halleck and Melendez that the First Amendment applies to MNN and allowed their lawsuit to go forward. In its view, MNN’s public-access channels are public forums – places like streets and parks, where members of the public can speak freely, and where speech is protected by the First Amendment. The court of appeals also reasoned that MNN is a state actor, because the local government chose the company to operate public-access channels on the borough’s cable system. MNN appealed to the Supreme Court, which agreed last fall to take up the case.

Arguing on behalf of MNN this morning, attorney Michael De Leeuw urged the justices to preserve the lines between government action and private conduct. The exceptions to the rule that the First Amendment normally applies only to the government are “very rare,” De Leeuw stressed, and MNN is not a state actor under any of these exceptions.

Justice Ruth Bader Ginsburg pointed out that MNN was engaged by the city of New York to administer the public-access TV channels on a “first-come, first-served” basis. MNN doesn’t exercise its own independent judgment, she observed, nor does it have any decision-making authority – both of which points, she seemed to suggest, would weigh in favor of deeming MNN a state actor.

De Leeuw pushed back, telling Ginsburg that MNN has the power to curate the content that airs on its channels and to create its own content, but the question of exactly what discretion MNN has and the significance of that discretion (if any) occupied much of the discussion.

Justice Sonia Sotomayor appeared unimpressed with De Leeuw’s argument, telling De Leeuw that even if MNN can create its own content, that would mean it plays a “mixed” role, just as the government sometimes does when it delivers its own message.

Justice Stephen Breyer was initially skeptical as well, indicating that a decision about which channel to air a particular show on does not, in his view, involve significant discretion. But Breyer later acknowledged that “there isn’t much discretion in respect to what they run, but there is some.”

Chief Justice John Roberts was more receptive. He told Paul Hughes, who argued on behalf of Halleck and Melendez, that MNN’s power over the programming schedule, including its ability to group shows based on the same subject together, would be a “significant departure” from a “first-come, first-served” rule.

And Justice Elena Kagan wondered aloud about how the court could establish a rule in this case that would also govern future cases. Even if, as Halleck and Melendez argue, MNN doesn’t have any discretion over what goes on the air, what if the city gave the administrator “some discretion to decide within particular areas which programs were better than other programs?”

Kagan also asked De Leeuw whether New York has a property right in the public-access channels, which is important to deciding whether the TV channels are public forums. The cable operators can’t function without using the public rights of way; in exchange, Kagan noted, the government requires cable operators to set aside public-access channels. Why, she seemed to ask rhetorically, isn’t there a property right or easement in the channels? 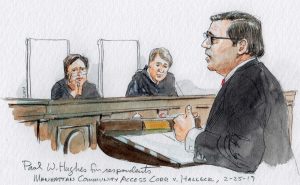 Justice Brett Kavanaugh, however, saw things differently. Kavanaugh told Hughes that he didn’t “understand why leasing or operating a public access channel” is the kind of traditional public function normally taken on by the government. Kavanaugh emphasized that MNN is a private company, running on a privately owned cable system – in his view, more like a utility than a state actor.

However the case turns out, companies like Facebook and YouTube may be breathing a little easier after today’s argument. The internet giants had been concerned that a ruling for Halleck and Melendez might mean that they too could be subject to the First Amendment. Pressed by both Kavanaugh and Breyer, Hughes took pains to make clear that the justices have not been asked to decide that question. Instead, Hughes emphasized, his case is “limited to the context of public forums and the administration of public forums being state action.”

A decision in the case is expected by the end of June.